Health Care REIT (NYSE:WELL) is a market-leading real estate investment trust, which invests in healthcare properties and leases them to operators. And, with shares down about 20% from their January highs, now may be a great time to take a closer look. Here's what you need to know about the company, its industry, and what could make it a solid long-term addition to your portfolio.

What is Health Care REIT?

As the name implies, Health Care REIT invests in properties focused on healthcare operations. 63% of the portfolio (by income) is made up of senior housing facilities, 21% is long-term care (LTC) properties, and 15% is outpatient medical facilities. In all, Health Care REIT owns 1,384 properties, of which the majority (86.5%) are in the United States, with smaller portfolios in the U.K. and Canada.

A huge industry that's only getting bigger
Perhaps the top reason to love Health Care REIT is that it's in an industry that is naturally expanding, and fast. And this is especially true for senior housing and LTC properties, which are the company's bread and butter. Not only is the industry expected to grow rapidly, but it's already large and fragmented, creating tons of existing opportunity for Health Care REIT to take advantage of attractive investments as they come up. Currently, the U.S. Healthcare real estate market is about $1 trillion in size, and even though Health Care REIT is an industry leader, its share is a mere 2.4% of the total.

Then, once Health Care REIT forms a winning partnership, it likes to expand on it by actively investing alongside existing partners, which takes a lot of the uncertainty out of investing. In fact, 81% of the REIT's investments during the first quarter were made with existing partners.

The combination of these factors allows Health Care REIT to maintain high occupancy levels and to extract more revenue from its properties. Its senior housing units produce 52% more revenue than the industry average, and its LTC properties have an above-average 87% occupancy rate (83% is average).

Interest rates create risk, but they also present opportunities for long-term investors
When interest rates rise, like they are widely expected to do later this year, REITs tend to feel the pressure. In fact, the expectation of rising rates is a big part of the reason Health Care REIT has fallen 20% from its January highs. 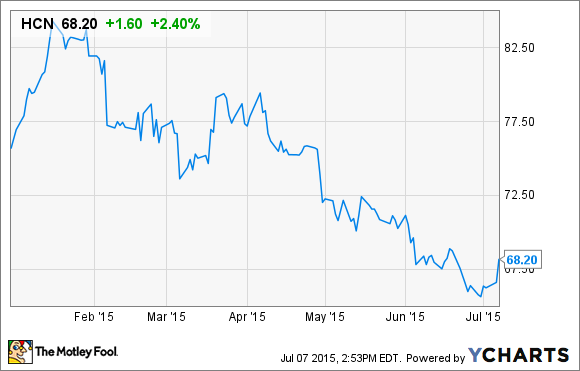 There are two main reasons for this. The first is that as rates rise, the cost of borrowing money increases. And, since most real estate deals are financed, at least in part, with debt, rising rates could eat into REITs' profit margins.

However, with a low-leverage company like Health Care REIT, the actual effect of rising rates on earnings is likely to be rather mild. The company only finances 38% of its average investment with debt, and it has the ability to raise capital through equity offerings as it sees fit. In other words, if Health Care REIT felt rates were too high, it may not even need to borrow money at all.

And, when rates rise, income-seeking investors tend to shift into less risky fixed income investments like bonds. In a low-rate environment, income investors pour money into higher-paying investments like REITs, but as rates rise, higher income can be achieved without the risk. So, while this certainly creates downward pressure, it doesn't fundamentally change anything about the REIT or its profitability.

If interest rates do rise more quickly than expected, it could create a nice buying opportunity in this REIT (as well as many others).

A long-term winner, no matter when you get in
Now, I'm not telling you to wait until Health Care REIT's share price drops before considering an investment -- I'm merely making the point that rising interest rates shouldn't be a cause for alarm. After all, the company has done well in the past when rates rise, and it will continue to do so in the future, thanks to a low-leverage balance sheet and limited reliance on borrowed money to fund future investments.

Over its lengthy history (founded in 1970), Health Care REIT has averaged a total return of 16.1% per year, including some pretty rough recessions and one of the worst real estate collapses in history. To put this kind of performance in perspective, consider that a $10,000 investment compounded at this rate would grow to $885,000 after 30 years.