Deep-sea drilling has always been the most challenging frontier in oil production and will continue to remain so. Yet this segment is forecast to grow faster than its onshore counterpart. The reason is pretty simple: As long as there's an absence of a credible alternative-energy resource, long-term global demand for crude oil and natural gas should remain high.

Energy research firm Douglas Westwood forecasts deepwater spending to total $210 billion between 2015 and 2019 -- the highest between any five-year period. 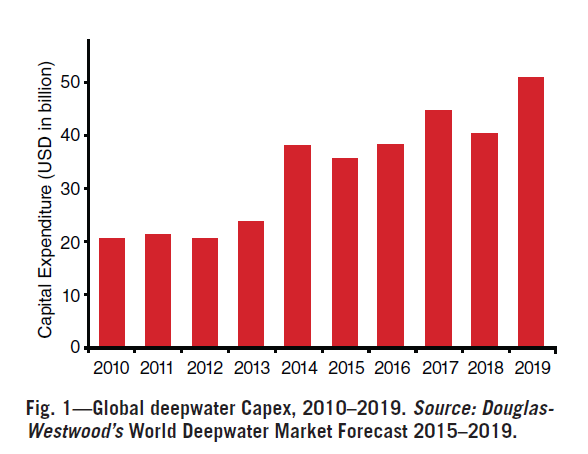 Keeping the above bull case in mind, here are three companies involved in deep-sea drilling that'd be solid long-term bets with significant potential for growth.

Atwood Oceanics (NYSE:ATW): The Houston-based rig contractor is comparatively smaller than its counterparts. However, its rig fleet is among the most modern with four ultradeepwater, or UDW, rigs out of a total fleet of 11. For the uninitiated, UDW rigs are capable of drilling in water depths between 7,500 feet and 12,000 feet. Additionally, two more UDW drillships are under construction. Average fleet age (excluding rigs under construction) is nine years, which is pretty attractive. Only two rigs are over 12 years old. 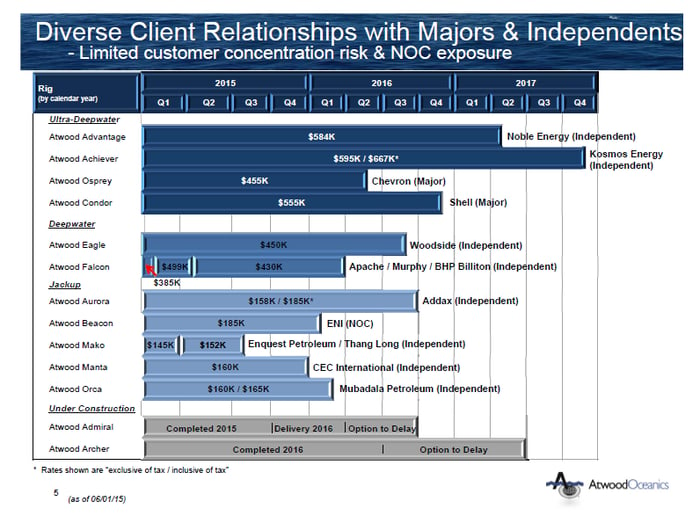 However, what really sets Atwood Oceanics apart is its financial discipline. Management isn't really looking to grow the company at the cost of destroying value. Its debt-to-equity ratio of 59% is among the lowest within the industry. Since its gradual transitioning to ultradeepwater drilling, Atwood's gross margins have improved. While drilling costs are higher in ultradeepwater, so are dayrates for such rigs.

Its remotely operated vehicles, or ROVs, and related tooling are useful across the entire spectrum of offshore drilling: drilling, completion, installation, production, and decommissioning. And here's the investment thesis: Oceaneering is the world's largest manufacturer and operator of work-class ROVs and currently employs around 336 different ROV systems across the globe. Additionally, its market share is by far the largest, commanding around 36% of the global share. Additionally, Oceaneering has the lion's share of global offshore-drilling support through its ROVs, with current market share at 58%. Provided that long-term prospects of offshore drilling remain significant, Oceaneering's business model has a well-built economic moat that'd be difficult for competitors to break through. 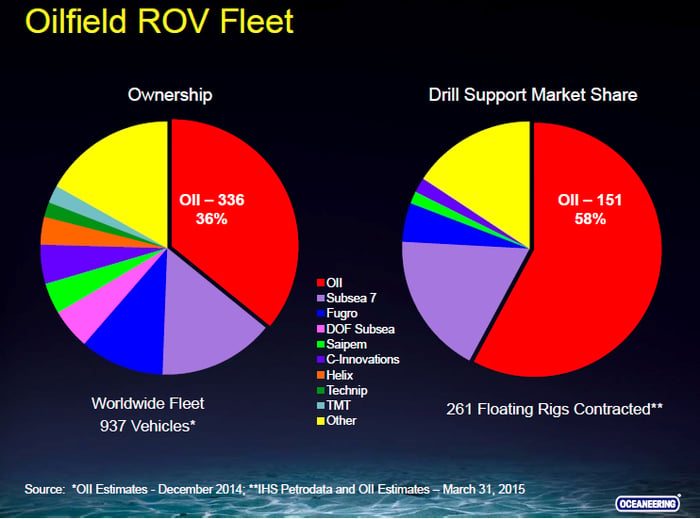 In addition, Oceaneering is building a robust position in specialty subsea systems, including installation and workover control systems, blowout preventer intervention systems, and services such as asset integrity. The subsea products and asset integrity divisions are growing business segments that are capable of wresting market share from rivals.

Noble Corporation plc (OTC:NEBLQ): London-based Noble is one of the bigger offshore drilling contractors operating 32 rigs. There are two reasons why this company has made it to the list of the best deep-sea-drilling stocks: First, the company owns 13 ultradeepwater rigs, of which eight are five years old or less. A whopping 67% of the company's revenues are derived from its UDW fleet (see chart below). Average fleet age is a healthy 15.5 years. 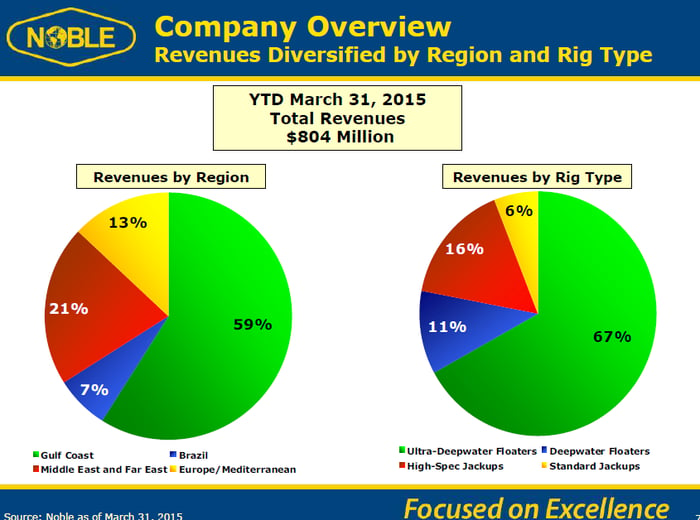 Second, like Atwood Oceanics, Noble's balance sheet looks solid. Its debt-to-equity ratio at 67% is one of the lowest among offshore drillers. In addition, 35% of its total debt matures only by 2040 or later. If we are focusing on the long term, this company makes a lot of sense. Again, like Atwood, management isn't looking to sacrifice value in order to grow the company. There aren't any speculative newbuilds in the pipeline.

Foolish takeaway
Deepwater drilling's long-term future looks essential and significant. If you are taking the long-term view, these companies should definitely be in your radar.