Few energy sources are as contentious in the U.S. as nuclear power. Besides concerns over safety and the issue of what to do with a decade's worth of nuclear waste, recent nuclear projects are coming in billions of dollars over budget, raising questions about the future economic competitiveness of nuclear energy in America.

However, overseas, nuclear power's future may be far brighter, and that's why Chicago Bridge & Iron Company (NYSE: CBI), and General Electric (NYSE: GE) may be the two best stocks to invest in nuclear power.

Still room to grow
China recently renewed its nuclear expansion program -- which was put on hold after 2011's Fukushima disaster -- with plans to nearly triple its nuclear power capacity by 2020 from 20 GW to 58 GW of electrical generating capacity.

According to He Yu, chairman of China General Nuclear Power Group, China will need to bring its nuclear capacity to 150 GW by 2030 in order to meet its goal of generating 20% of its power from non-fossil fuel sources.

To put that in perspective, America's nuclear fleet currently stands at around 100 GW of summer capacity, meaning China may potentially increase its nuclear power capacity by 650% -- or 1.3 times America's current nuclear capacity -- over just the next 15 years.

Nuclear is experiencing a renaissance in other nations as well, with over 60 reactors currently under construction in 15 countries -- over 60% of which are outside of China in nations such as Russia, the UAE, and South Korea.

Warren Buffet's Berkshire Hathaway happens to own $534 million worth of shares -- 9.85% of the outstanding stock -- and it's not hard to see why Berkshire is such a fan of this company.

For one thing, Chicago Bride & Iron's long track record of excellent customer service and relentless focus on safety -- in its last quarter, it reported just one injury per 20 million employee hours worked -- mean it is one of the most trusted companies in its industry.

That trust translates to strong long-term growth in both sales and its project backlog, which now stands at an impressive $30.4 billion. To put that into perspective, this is 5.6 times its market cap and represents over two years of revenue. 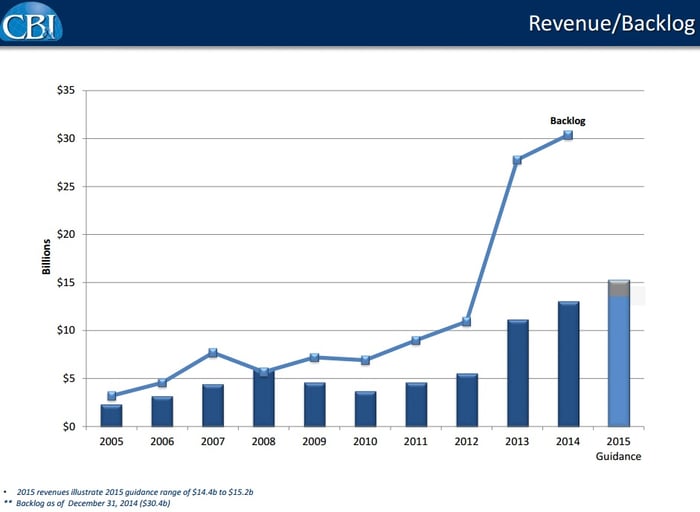 Chicago is a highly diversified company with only 5.6% and 7.5% of its 2014 sales and new contract awards, respectively, coming from nuclear projects.

However, what excites me about Chicago's future in the global nuclear energy industry is the fact that it is working with Westinghouse to build four nuclear power plants in China.

Given China's incredible potential hunger for dozens of additional nuclear reactors over the coming decades, and Chicago's excellent reputation for reliable and safe work, it's very possible it could win many of those future Chinese nuclear plant contracts. Thus, nuclear potentially stands to become a much larger part of Chicago Bridge & Iron's overall business, helping it continue its long-term dividend and share price growth winning streak. 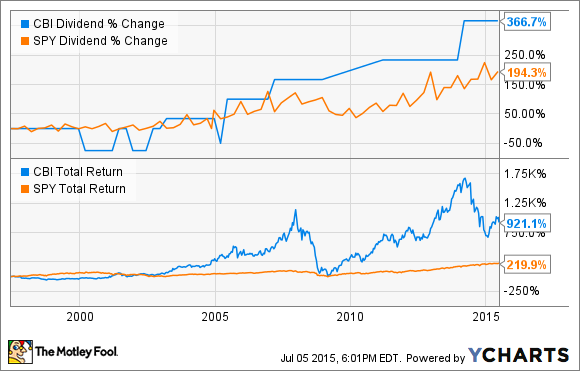 GE's competitive advantage in the nuclear industry is its long history of designing and building some of the safest reactors in the world --  it's been building reactors for almost 60 years through its Hitachi joint venture.

For example, its 1.35-1.46 GW third-generation ABWR reactor is designed to suffer core damage just once every 16 million years. Its third gen+ 1.52 GW ESBWR reactor, thanks to a simplified design (it uses 25% fewer pumps, valves, and motors that can fail or break), is expected to be almost 11 times safer, suffering damage just once per 170 million years.

GE Hitachi is also currently working to perfect its PRISM reactor, which generates 0.31GW of electricity while utilizing nuclear waste as fuel. Because nuclear waste consists of 96% still-usable fissionable elements, PRISM reactors could potentially generate 100 times more power per unit of nuclear fuel than conventional reactors, and prove a tantalizing way for China -- and the rest of the world -- to recycle the large amounts of nuclear waste it will be generating in the future.