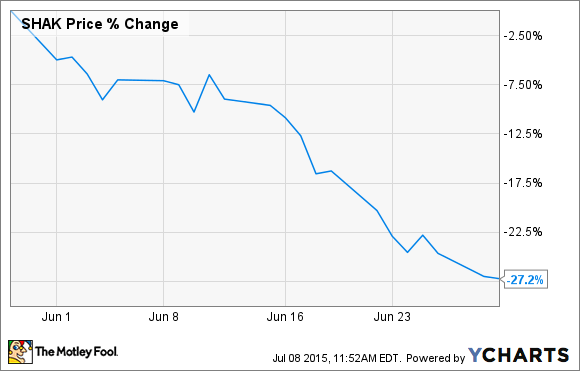 What: Shares of Shake Shack (NYSE:SHAK) nose-dived 27% in June, according to data from S&P Capital IQ. Shares of this recent IPO, which had been on fire since they began trading in late January, gave back much of those gains last month.

So what: Shake Shack quickly doubled its $21 IPO price on its first day of trading on Jan. 30, 2015, closing at $45.90. Shares soon more than doubled again, hitting a high of $96.75 in May, as excitement over the burger chain's growth potential and low share float created a situation where demand for Shake Shack's stock far outstripped supply.

As its stock price was enjoying a parabolic move, Shake Shack's lofty valuation began to raise concerns among several Motley Fool writers, who issued several warnings during that time. Soon after, as other investors also began to question its valuation, Shake Shack's share price began a descent that would reach nearly 30% in June and almost 40% since its high in May.

Now what: Shake Shack is an intriguing long-term growth story. Management believes 450 locations are possible in the just the U.S. With only 68 stores as of May 5, 2015, the burger chain still has many years of growth to come.

It's worth noting that Shake Shack's leadership team is highlighted by restaurant legend Danny Meyer. Meyer has an excellent track record of success in the industry, and he's exactly the type of founder that investors can feel comfortable investing beside.

Yet investors may be best served by waiting for a better entry price, which could come soon if Shake Shack's stock price continues its rapid descent.