Over the past 20 years, BP's (NYSE:BP) dividend yield has been this high only twice: Once during the financial collapse in 2008, and the second time as we started to realize the scope of the Macondo well blowout, and how much it was going to cost the company both financially and politically. So basically, when the dividend yield has been pushed this high, it's normally been a sign that investors don't think it can be sustained. 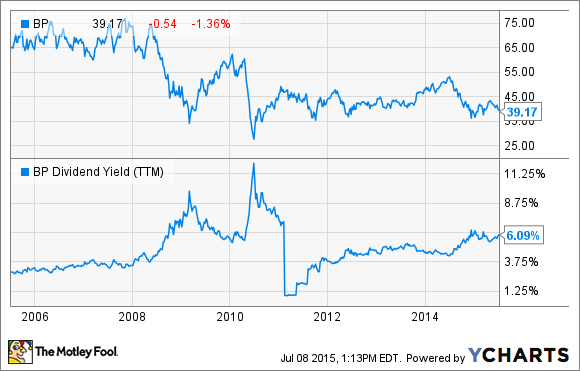 What about this time around? Now that the company has settled with both the federal government and the Gulf states to the tune of $18.7 billion over the next decade and a half, what is causing so much skepticism?

Let's take a look at BP to see if today's abnormally high dividend yield is a sign that the company could be headed for another cut soon, or if perhaps investors are overreacting to a rough patch in the commodity cycle.

"Our first priority within the financial framework is the dividend"
This phrase has been repeated by BP CEO Bob Dudley during the last three quarterly conference calls, so you can surmise that dividend payouts are a pretty big deal for management right now. Then again, words go only so far. What really matters is whether the company has the operations to do it.

Right off the bat, several investors will point to some less than stellar earnings results that might suggest the dividend isn't on as solid of ground as management says. The dividend payout ratio over the trailing 12 months -- the ratio of total dividends paid over net income normalized for one-time items such as asset writedowns -- is a rather frightful 125%, which means it's paying out more in dividends than it's earning in net income.

To be fair, though, earnings aren't cash; they are a hyopthetical increase in equity after non-cash considerations such as depreciation and amortization. What is more important when it comes to dividend payments is the company's ability to generate cash. In this regard, BP is doing a little better.

Over the past 12 months, BP has generated $26.4 billion in cash from operations while only needing $21.3 billion to cover its capital expenditures, leaving the company with an excess of $5.1 billion in cash before all of those ancillary things such as assets sales and divestitures. It may not be enough to cover all of its dividend payments over the past 12 months, but it's holding up quite well compared to many of its peers.

So indeed, today's current oil price environment isn't doing BP any favors, but the company's cash flow is holding up relatively well, all things considered, and isn't out of line with others in the space.

The path forward
For the past five years, the albatross that has hung on BP's stock has been how much the Deepwater Horizon spill would ultimately cost the company. Now we know, and a little over $1 billion a year for the next several years seems like a pretty reasonable amount. After all, that's equivalent to about 15% in dividend payments annually.

So for BP, the question isn't really if it can make those payments in the future, but rather where the cash will come from to make those payments. While BP's plan is slightly less focused than those of some of its peers, its plans to grow production do look pretty robust.

Take for example its peers: Royal Dutch Shell is clearly making a big push into LNG and exploring deep offshore drilling. Its $70 billion acquisition of BG group will make it the largest supplier of LNG among the integrated majors by a considerable margin. This deal will also help to boost its presence in offshore Brazil, which has a ton of potential as a new oil source but is temporarily stuck in the mud because of corruptions scandals surrounding the national oil company.

Then you have ExxonMobil, which is also making big strides into LNG, but is also banking a large port of its future in Canadian oil sands and Russian Arctic oil production. These may not look like the most attractive places to invest capital today, but the cyclical nature of oil and gas suggests they will have a long-term benefit for the company.

BP, on the other hand, has a bit more of a smorgasbord approach to its production growth. It hopes to grow net production by 900,000 barrels per day by 2020, and the largest contributors to that growth will be Angola, the Gulf of Mexico, Azerbaijan, and the North Sea. However, these still represent less than half of where BP plans to get its production growth from. 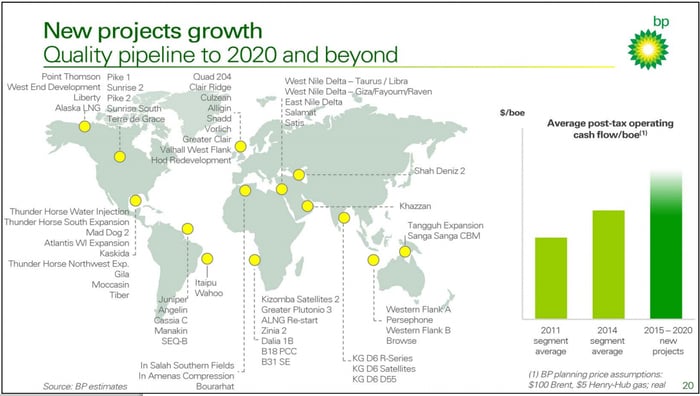 If there was one yellow flag to this plan, it's in the bottom right corner of that presentation. Many of the assumptions made for that outlook were based on the price of oil being $100 per barrel. If oil prices were to remain low, some of the longer-term projects could end up being put on the shelf for a while.

What a Fool believes
BP has done a rather commendable job sticking to management's word about maintaining its current dividend payment, but there is a lot of pressure coming from lower oil prices. If oil prices were to rebound rather quickly, then BP shouldn't have an issue keeping its current dividend in tact. That would make today's 6.1% yield look like an amazing opportunity for your portfolio.