There were plenty of signs that this was coming. Earlier this week, Microsoft (NASDAQ:MSFT) dropped a mobile bomb. In a troubling but inevitable concession, Microsoft confirmed that it will lay off 7,800 unlucky workers, most of whom are in the phone hardware business that the software giant paid so handsomely for.

At the same time, the company will be taking a massive $7.6 billion impairment charge related to the acquisition of Nokia's handset business. That's on top of another $750 million to $850 million in restructuring charges that Microsoft will incur. Ouch.

How committed is Nadella really?
The news comes just over a year after Microsoft closed the deal in April 2014. Just a few months later, CEO Satya Nadella outlined a broad organizational restructuring that would entail cutting 18,000 jobs. Of those, 12,500 were within the phone business that Microsoft had just bought. This latest round now brings phone-related layoffs up to 20,300. It also represents almost 7% of Microsoft's total workforce, which stood at 118,000 employees at the end of March.

Yet even after axing all those positions, Nadella says he remains "committed" to first-party phones. Here's how he put it in his letter to employees:

In the near term, we will run a more effective phone portfolio, with better products and speed to market given the recently formed Windows and Devices Group. We plan to narrow our focus to three customer segments where we can make unique contributions and where we can differentiate through the combination of our hardware and software. We'll bring business customers the best management, security and productivity experiences they need; value phone buyers the communications services they want; and Windows fans the flagship devices they'll love.

The distinction seems a bit semantic, but it sounds as if Microsoft doesn't want to spearhead the hardware efforts for Windows 10 Mobile devices anymore. Instead, it wants to focus on the broader ecosystem, which just so happens to include first-party devices.

That was quick
When Nadella shook up his executive ranks last month, ousting former Nokia CEO (and more recently, Microsoft devices exec) Stephen Elop in the process, it was a clear sign that Microsoft was having doubts about its phone hardware business. Besides, Microsoft explicitly braced investors for an imminent writedown in April, when it filed its 10-Q with this ominous language (emphasis added):

Given its recent performance, the Phone Hardware reporting unit is at an elevated risk of impairment. Declines in expected future cash flows, reduction in future unit volume growth rates, or an increase in the risk-adjusted discount rate used to estimate the fair value of the Phone Hardware reporting unit may result in a determination that an impairment adjustment is required, resulting in a potentially material charge to earnings.

There was a grand total of $10 billion in goodwill and intangible assets associated with the deal, and the impairment will wipe out the majority of that sum.

Here are the financial results that the phone hardware business put up during the four quarters reported since the deal closed. 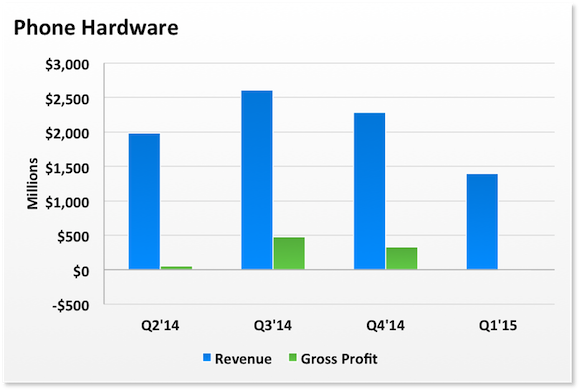 Nadella has never been too thrilled about the phone hardware business. After all, it was his predecessor that put the deal together and threw a temper tantrum about it to boot. In fact, Steve Ballmer, never one to be subtle, screamed at the board to let him go through with the deal. The episode was part of what sealed Ballmer's fate and paved the way for Nadella's promotion. Nadella just inherited the mess.

While Microsoft is taking a major step back from phones, I just so happen to know of a company that's interested in designing them again that Microsoft could potentially partner with: Nokia.