Please ensure Javascript is enabled for purposes of website accessibility
Log In Help Join The Motley Fool
Free Article Join Over 1 Million Premium Members And Get More In-Depth Stock Guidance and Research
By Steve Heller - Jul 12, 2015 at 7:19AM

How General Electric's spirit of invention has been its guiding force. 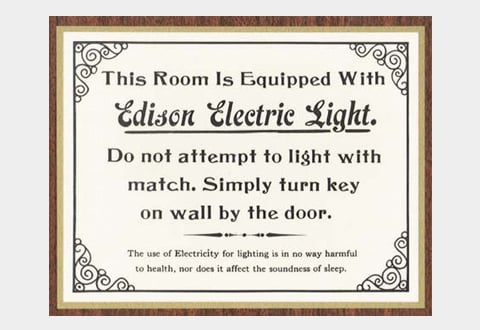 The year was 1878, and Thomas Edison founded the Edison Electric Light Company to invent a commercially viable incandescent electric lamp. The following year, at the Menlo Park Laboratory in New Jersey, Edison achieved success and developed an incandescent lamp capable of staying lit for 40 hours. By 1880, Edison had refined the filament of its bulbs to the point that they lasted 600 hours. Cheap, reliable lighting had staggering implications for the world at large.

In parallel, Edison was also developing the world's first power generators that converted mechanical energy into electrical energy on a scale large enough to illuminate entire neighborhoods. This allowed Edison to enter the power-generation business in 1882, operating as the Edison Electric Illuminating Company, which was tasked with constructing America's first central power plant in New York City.

By 1890, Edison had established and invested in numerous businesses related to power generation and lighting, which were brought together under the name Edison General Electric Company.

Two years later, Edison General Electric merged with The Thomson-Houston Company -- Edison's main competitor -- and formed what's known as General Electric (GE 1.58%) today. The joint entity employed over 10,000 people, generated more than $20 million in annual sales, and its inventions had a major impact in advancing the standard of living into modern times.

Shares of General Electric began trading on the New York Stock Exchange in 1896, and it remains the only company still part of the original Dow Jones Industrial Average. To this day, GE's spirit of invention fuels the company's mission to move, power, build, and cure the world.

A company of firsts
Throughout its existence, General Electric has been responsible for many "firsts" in the world.

Near the turn of the 20th century, GE invented the first X-ray machine, electric locomotive, technology behind the first voice radio broadcast, and electric kitchen appliance. GE also made significant contributions to industrial plastics, early electronics, power generation, and aviation during this time.

By 1920, General Electric was responsible for inventing the first air-tight refrigerator, the technology that paved way for the microwave oven, the trans-oceanic radio system that played a major role during the World Wars for Allied Forces, and the portable X-ray machine.

In 1921, the company's supercharger engine enabled a plane to reach a record-breaking altitude of 40,800 feet -- effectively laying the foundation for modern aviation.

Between 1935 and 1945, GE invented fluorescent lighting, non-reflective coating for a host of applications, new silicone chemistry for a wide range of uses, the first television network, turboprop engine, autopilot system, and commercial radar.

The 1950s for GE brought innovations to aerospace components, the invention of synthetic diamonds, and gave birth to the still-popular toaster oven. The company even built the world's first licensed nuclear power plant in 1957.

By the 1970s, GE had invented LED lights, solid-state lasers, self-cleaning ovens, and powerful magnets that were the precursor to its MRI machine. It's also worth noting that over 6,000 of GE's employees helped put U.S. astronauts on the moon in 1969.

In later decades, General Electric's spirit of invention continued to make everyday life better, and by the year 2000, the company had collectively been awarded nearly 68,000 patents for its inventions and innovations.

Built to thrive
During the nearly 125 years that General Electric has been in business, it's endured two World Wars, the Great Depression, several major recessions, and countless other crises. Historically, diversification has been the key that has allowed GE to mitigate the impact of disruptive events.

The following table provides an overview of recent notable events that affected GE's operating segments, how they were mitigated, and what came of it: One could even argue that diversification likely benefits GE's long-term operating results, because it gives the company opportunities to gain market share against its pure-play rivals during times of crisis, which may not be as well-equipped to invest in strategic long-term growth initiatives.

History in the making
Although it's impossible to recount General Electric's rich history in less than 750 words, it should be clear to investors that the company's spirit of invention is almost sure to be its guiding force in the future. In other words, the future of GE will likely follow a similar trajectory to its past -- pushing the boundaries of science, technology, and manufacturing to move, power, build, and cure the world.