Please ensure Javascript is enabled for purposes of website accessibility
Log In Help Join The Motley Fool
Free Article Join Over 1 Million Premium Members And Get More In-Depth Stock Guidance and Research
By Steve Symington - Jul 13, 2015 at 9:58AM

Is the sell-off in Polycom shares just the beginning of harder times ahead?

What: Shares of Polycom (PLCM) fell 15.1% during the month of June. Thanks to that recent weakness, Polycom stock now finds itself significantly trailing a 0.9% gain for the S&P 500 year-to-date. 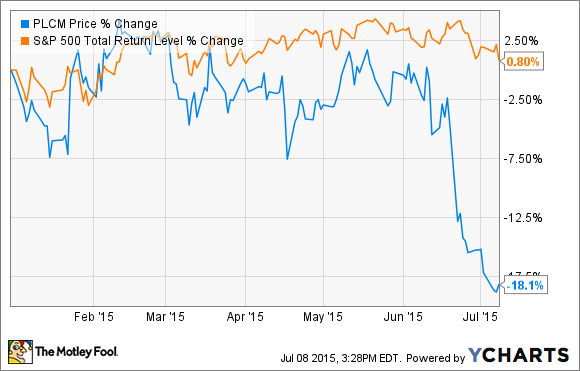 So what: Polycom had an uneventful start to the month, continuing to trend slightly lower on the heels of the market's seeming indifference to its mixed first quarter results in late April. At the time, Polycom revealed it grew quarterly earnings by 28% on a year-over-year basis thanks to cost-cutting, but revenue growth remained elusive at only 1%. That said, CEO Peter Leav acknowledged Polycom likely lost share in its crucial North American segment during the period and specifically called out Cisco Systems' launch of a new video endpoint solution as having a negative impact on Polycom sales.

But on June 22nd, Polycom stock took its biggest dive of the month, falling almost 10% in a single day when William Blair analyst Jason Ader downgraded the stock from "market perform" to "underperform." Ader explained that, after field-level discussions with value added resellers, he believes Polycom is facing additional pressure in the current quarter from not only competition but also weak video demand and sales execution, as well as friction from the recent overhaul of its channel partner program.

Now what: Investors will not have to wait long to find out if Ader was correct. Polycom is set to release second quarter results later this month, and investors will be watching closely to see how it fared. Analysts, for their part, expect revenue to grow a modest 0.2% year-over-year to $332.5 million, which should translate to a penny-per-share increase in earnings to $0.22. In the end, whether Polycom overcomes its challenges and lives up to those expectations remains to be seen. But if the results deviate one way or the other, I suspect investors could be in for more volatility in the near future.

Why Polycom and Mitel Networks Both Skyrocketed Today