What will happen when the market's best-performing stock updates investors on its latest business results?

Grab some popcorn and get ready for the show. The year's best-performing stock so far posts earnings results after the market closes on Wednesday, June 15.

The stakes don't get much higher than this: Netflix ( NFLX -2.33% ) shares are up a dramatic 49% since it announced quarterly numbers three months ago. The stock has doubled just since the beginning of 2015. 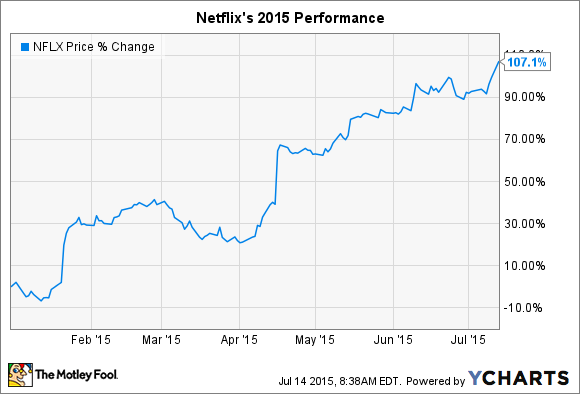 None of the recent optimism is about profits, though. Wall Street sees the streaming video giant posting a 64% earnings drop this week. But sales should rise by a healthy 23%, according to analysts:

Watch: U.S. subscriber numbers
Keep a close eye on domestic subscriber growth. The business stumbled last year when Netflix posted slowing U.S. membership gains for the first time in its history. After hiking prices, it added just 1 million paying members in the third quarter compared to 2.33 in the prior year period. That result was followed by another year-over-year slip: Netflix tacked on 1.9 million customers in the fourth quarter versus 2.25 a year ago.

But the company returned to accelerating growth in Q1 of this year. And management's forecast calls for a repeat performance in Q2. If Netflix can add at least 600,000 new subscribers, beating last year's result, then market saturation isn't a big concern — even though 40 million users are already paying up for the streaming service.

Watch: international growth
That's important mainly because the local customer base is funding a massive global expansion. International user growth came in well ahead of management's target last quarter thanks to outperformance in several new markets.

CEO Reed Hastings singled out Australia and New Zealand in his shareholder letter, saying the March 24 launch in the region "benefited from high consumer awareness, a fervent fan base for original series like House of Cards and Orange Is The New Black and operator relationships with broadband providers." Netflix hopes to nab a high percentage of the 8 million broadband households in the countries.

Overall, international streamers should hit 23 million users this quarter, up 65% from last year.

Watch: negative cash flow
Most of Netflix's profits are being directed toward attacking those new market opportunities. But there's another huge drain on earnings that the company isn't able to fund through operations: original content.

Exclusive shows like Sense8, Marco Polo, and House of Cards are pushing Netflix's engagement levels to record highs, boosting the brand, and making marketing an easier sell for attracting new members. That's why management is launching more than 300 hours of original programing this year, or triple 2014's slate.

But these shows require huge upfront cash investments, relative to licensed content. And so free cash flow has taken a big hit: Netflix burned through $74 million, $78 million, and $163 million in the past three quarters. That worsening position drove credit agencies to downgrade the company's debt, citing the outlook for "persistent and significantly higher negative free cash flows going forward."

Hastings and his team think it's a risk worth taking, though. After all, original content is some of the streamer's most efficient in terms of straight viewing metrics. That's why Netflix plans to "continue to grow the percentage of our content spending dedicated to originals for the next several years." But "this will mean more cash usage, which means more debt," he warned.

Netflix took out a new $1.5 billion loan this year and more red ink this quarter would make another big dip into the debt market likely for 2016.