China's stock market is in freefall. Greece threatens to take the entire eurozone down if (or when) it exits the single currency. And here in the U.S., the stock indices are virtually unchanged from where they were at the start of 2015.

While investors are getting jittery about the potential for a repeat of the market collapse witnessed during the last recession, some stocks are ignoring the global worries and charging ahead.

Consumer goods companies are often the most susceptible to volatility because of their reliance on fickle consumer spending. These three stocks have been the best performers in the sector so far in 2015: Natural Health Trends (NASDAQ:NHTC), Skechers (NYSE:SKX), and Bassett Furniture Industries (NASDAQ:BSET). 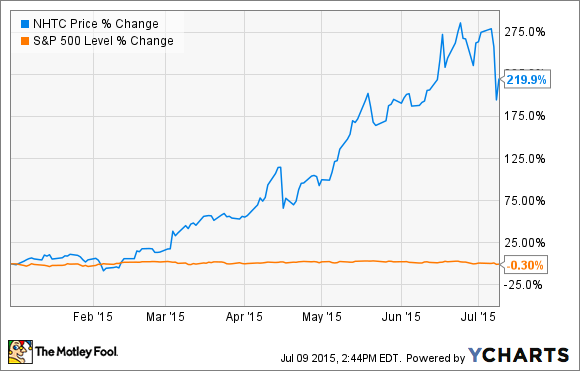 And that "distributors" might be the first word of caution for investors. Natural Health Trends is a multi-level marketing company. While there's nothing illegal or wrong per se with its operations, its reliance on having to attract ever greater numbers of distributors to grow makes it risky.

Second, its revenue comes almost solely from China. In the most recent quarter, 92% of its revenue came from Hong Kong. Particularly with China's economy slowing and its stock market plunging, this stock could tumble too. It's already lost 20% of its value over the past week, and even though it has nearly tripled in value so far this year, it could fall further.

2. Skechers (+107%)
Just a couple of years ago, footwear maker Skechers was reeling from slowing sales, rising inventory, and lost momentum. Then it was hit with lawsuits charging that it had deceived consumers by marketing its Shape-Ups toning shoes as a means of losing weight, improving cardiovascular health, and achieving overall better fitness. Skechers stock lost more than 70% of its value, trading just north of $11 a share, and the Federal Trade Commission smacked it down with a $40 million fine.

But fast-forward three years and the footwear company is soaring. Its stock now trades above $115 a share, a ten-fold increase in price. How did that happen, and why is it maintaining that momentum in 2015? Simple: it produces footwear consumers want.

Walk this way: Skechers has figured out just what consumers want.

Despite a strong dollar, the West Coast port slowdown, and unseasonable weather, net sales surged 40% to $768 million in Q1, a record quarterly high for the company. Across its wholesale, retail, and e-commerce business, the footwear company enjoyed burgeoning demand.

Of course, fashion is a fickle master, and Skechers knows better than most that consumer tastes can and do change. Furthermore, cautious investors should understand that at 35 times earnings and 20 times next year's estimates, Skechers is not cheap.

3. Bassett Furniture Industries (+84%)
The U.S. furniture industry -- and Bassett Furniture Industries in particular -- has been the beneficiary of a housing market that has returned from a near-death experience during the recession. The Commerce Dept. says annual retail spending on furniture and bedding has grown from $81.5 billion in 2010 to $96.4 billion last year, a better than 4% compounded annual increase in an otherwise stodgy industry. Sales are expected to exceed $100 billion this year.

But Bassett is doing even better and exceeding the industry average. Earlier this month, it reported that second quarter sales rose 17%, which is in line with the 18% jump it enjoyed in the first quarter and well ahead of the 6% increase in sales it witnessed across all of 2014 when it had one less selling week in the fiscal year.

Bassett Furniture's retail stores have proven to be a strong source of sales for the furniture maker. Photo: Mike Mozart, Flickr.

Consumers have been flocking to Bassett's retail stores, and the company enjoyed a 17% increase in comparable store sales, as well as strong growth in its wholesale division, which provides products not only for its retail stores but also for multi-line furniture stores.

Perhaps it's in response to the increased percentage of furniture that's American-made. According to Bassett's annual report, imports accounted for 42% of its wholesale sales in 2014, down from 50% two years ago and 53% in 2010.

Bassett trades at around 24 times earnings and next year's estimates, and its enterprise value is 30 times free cash flow. This is a significant premium to the market, suggesting it may be priced for perfection.

What it means for investors
Today's high-flying market darlings could quickly become tomorrow's flameouts, so simply chasing a stock higher is never a good strategy. Instead, ask how a business fits into its industry and whether it's performing up to expectations when deciding the best stocks to buy for the rest of the year.