Please ensure Javascript is enabled for purposes of website accessibility
Log In Help Join The Motley Fool
Free Article Join Over 1 Million Premium Members And Get More In-Depth Stock Guidance and Research
By Jordan Wathen - Jul 16, 2015 at 9:01AM

Blackstone Group reported lower-than-expected economic net income, but the company's distributable earnings -- what fuels its beefy dividend -- looks as good as it ever has.

Blackstone Group's (BX) second-quarter earnings weren't spectacular, but they were far from bad. The company reported economic net income of $508.4 million, or $0.43 per share. That was just under the average estimate of $0.47 per share, according to a poll by Thomson Reuters. 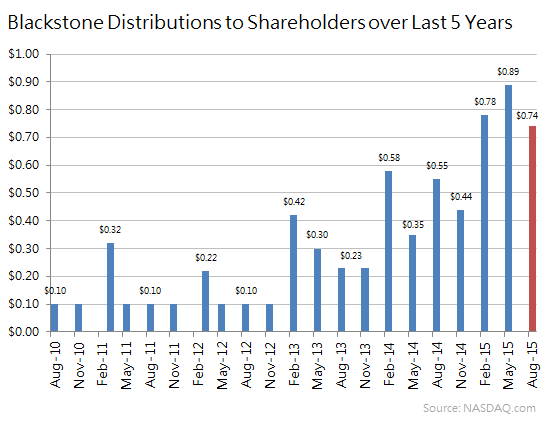 Making sense of Blackstone's earnings
Investors who are unfamiliar with asset management and partnerships may find the differences between distributable earnings and economic net income confusing. Put simply, economic net income reflects the accrual of earnings, whereas distributable income reflects the earnings that were realized in the current quarter.

Blackstone's distributable earnings soared year over year in part because it monetized large portfolio companies including Nielsen, Pinnacle Foods, in addition to sales of stock in a legacy asset -- Hilton Worldwide Holdings.

Fueling the distribution going forward
Earlier in the week I discussed one of the most important metrics for Blackstone's distributions, its accrued performance fees. This is how much Blackstone stands to collect in fees earned in prior periods when it cashes in on investments for its fund investors. Currently, this amount stands at $4.47 billion, down slightly from $4.91 billion, as a direct result of its asset sales in the current quarter. That equates to $3.80 per share in the current quarter, down from $4.17 last quarter.

Needless to say, with significant accrued fees, Blackstone has plenty of firepower behind its dividend in the short run. In the long-run, however, what matters is Blackstone's ability to grab more fee-earning assets under management and generate market-beating returns for its investors.

This quarter, Blackstone noted that it recorded gross inflows of $31.3 billion last quarter, bringing its assets under management up to a new record of $332.7 billion. This was a 19% increase over the prior year, when Blackstone had $278.9 million in total AUM. While all strategies have performed well, its "star students" -- real estate and private equity -- have both raised new multibillion-dollar mega funds in 2015. The company pointed out that its latest private-equity fund received $16.7 billion of commitments in the current quarter.

Blackstone can continue to drive earnings without new funds. The company revealed that its newest real estate fund is now included in fee-earning assets, whereas its newest private-equity fund is not. Its "undrawn capital" stands at $82.1 billion. Once these assets are deployed, Blackstone can start collecting fees on them.

Ultimately, Blackstone's results will ebb and flow with business valuations. With the market mostly flat for the year, it's no surprise to see Blackstone's economic net income tumbling year over year. But there's nothing to suggest that Blackstone's streak of winning for its clients and investors has come to an end. As its dry powder is deployed and its accrued performance fees are realized, investors can look forward to beefy quarterly distributions for the foreseeable future.