As an individual investor, it's easy to become overwhelmed with the amount of financial information available from companies the size of General Motors (NYSE:GM). In fact, some investors have probably viewed the same EBIT-adjusted bridge graph in each of GM's quarterly presentations and not fully understood it. So, let's solve that problem.

Here's a look at GM's EBIT-adjusted graph from the first quarter of 2015. 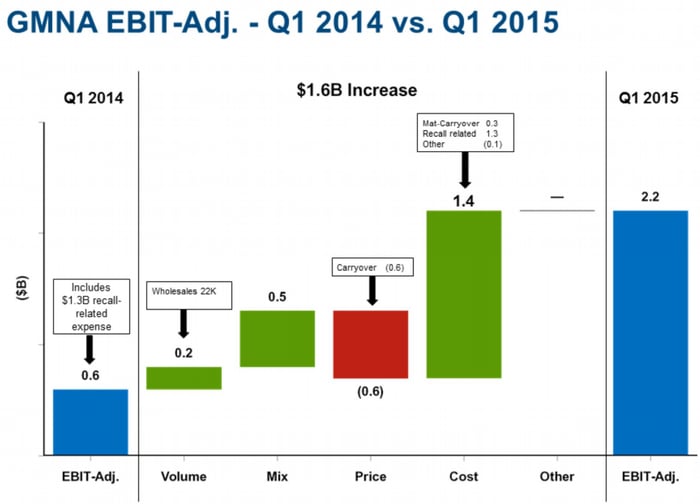 In terms of understanding GM's underlying business, this graph is hugely important, but it's often only glanced over. Let's dig into its importance and what it says about the health of GM's business and vehicle lineup.

The basic volume, mix, price, cost, and other variables that go into the EBIT-adjusted bridge -- a graph designed to show exactly how earnings before interest and taxes increased or decreased from the prior year -- are fairly straightforward, few investors fully understand each segment's details. Let's change that and show more details so investors can better understand what goes into the EBIT-adjusted bridge.

Volume is the most straightforward, and it notes the change in number of wholesale vehicles sold between the two time periods, which reflects changes in industry volume, market share, and dealer inventory. In the case of this graph from the first quarter, wholesales volume was up 22,000 units for an incremental $200 million, which was primarily driven by midsize trucks, SUVs, and a net increase in rental fleet impact.

Mix measures the vehicle profit variances resulting from changes in the product mix, which includes current and new product, retail vs. fleet, and country/segment/model/trim levels/options, according to GM. Here's some key information that most investors overlook when considering how GM notes the driving forces behind changes in mix profitability (I'll show a good example later):

Looking at GM's first quarter 2015, its mix increased by $500 million EBIT-adjusted compared to the first quarter of 2014. The positive impact was primarily driven by full-size SUVs, a segment that has recorded surging sales over the last couple of years. Furthermore, consumers are taking advantage of low interest rates and longer loan-term lengths to load up on higher-priced trims and option packages. That all contributes to a more profitable sales mix for General Motors.

Price is the economic price change related to current vehicles, including gross price (MSRP) and sales allowances for both retail and fleet. It also includes all price changes related to majors. This also brings up a good example of why it's important to understand these metrics. GM's price segment was $600 million lower in the first quarter of 2015 than in the prior year, which doesn't make sense, as the company continues to freshen its vehicle lineup, which should improve pricing power. So, what's the deal?

First-quarter pricing was a unique situation because consumers had brought in millions of vehicles to be repaired for its ignition switch recall in 2014, and some consumers opted to trade in the vehicle and drive a new one off the lot. Because of the surge in trade-ins for specific models, GM had to delay auctioning off these vehicles on a secondary market to salvage some of its pricing power, rather than flooding the market with all of those specific vehicles.

However, as much pricing power as it managed to salvage, the net gain/loss as a result of returned vehicle sales is represented under the price segment, and the vehicles that GM held off on continued to lose value as they aged -- that's part of why its pricing was lower in the first quarter 2015 compared to the prior year.

Cost includes the change in variable and fixed costs. Variable costs include the change in economic material/freight costs on current vehicles and all material/freight changes on major vehicles. Variable costs also include warranty/recall reserve adjustments and non-vehicle activity such as OnStar & Parts & Accessories. Fixed costs include the changes in fixed manufacturing, D&A, engineering, restructuring, and SG&A.

It's pretty clear that in the first quarter of 2015, the main benefit to cost was not having 2014's $1.3 billion in recall-related expenses. GM did note that it had favorable material and logistics cost performance, even though it was heavily outweighed by recall expenses.

You might be asking yourself how much all of this really matters, so let's take a look at another great example. What does the following EBIT-adjusted bridge say about General Motors' business during the fourth quarter of 2014? 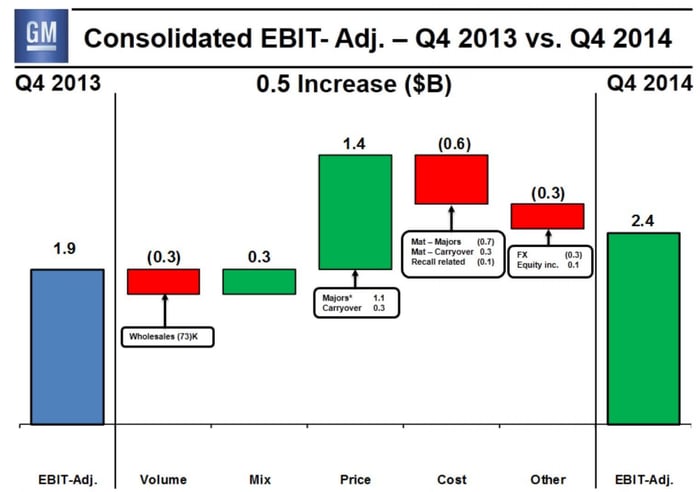 If you answered that General Motors' business was very healthy in the fourth quarter of 2014 because, despite a 73,000-unit decline in wholesale sales, the automaker's EBIT-adjusted income increased roughly 26% year over year because of strong pricing and demand for its newly redesigned vehicles, you'd be correct!

As General Motors continues to consolidate platforms to minimize costs, refresh its lineup of redesigned and new vehicles, and distance itself from massive recall costs, these graphs will continue to move in a more profitable direction.

GM's EBIT-adjusted graphs give investors a ton of information in very few words, and it's increasingly important for investors to understand exactly what the graphs are saying.