Please ensure Javascript is enabled for purposes of website accessibility
Log In Help Join The Motley Fool
Free Article Join Over 1 Million Premium Members And Get More In-Depth Stock Guidance and Research
By Adam Levine-Weinberg - Jul 17, 2015 at 8:22AM

JetBlue is delivering dramatically better stock performance than Southwest Airlines this year -- and it's all because of its superior unit revenue performance.

According to research from Cowen analyst Helane Becker, Southwest Airlines (LUV 0.58%) has a perception problem. Southwest wants to be seen as a discount airline, like JetBlue Airways (JBLU -1.31%).

But despite Southwest's domestic focus, low fares, customer-friendly policies, and disruptive potential, Mr. Market has been treating it more like a legacy carrier, according to Becker. To see why that's a problem, one only has to compare the year-to-date stock performance of JetBlue, Southwest, and legacy carriers like Delta Air Lines (DAL 0.97%). 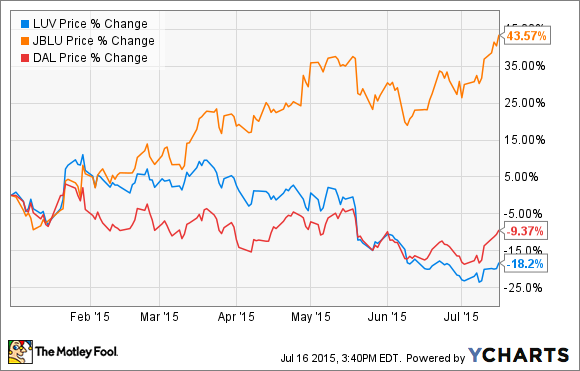 In Q1, Southwest's passenger unit revenue, or PRASM, increased just 0.3% year over year. To be sure, that was better than Delta's 1.7% PRASM decline -- which was largely caused by the strong dollar and falling fuel surcharges on international routes. On the other hand, it was far worse than JetBlue's 4.5% Q1 PRASM growth.

For Q2, the unit revenue headwinds are even stronger. Southwest's performance also looks even more like that of the legacy carriers. Southwest Airlines has projected that PRASM fell 4%-5% last quarter. That would be right in line with the 4.6% decline recently reported by Delta Air Lines.

By contrast, JetBlue Airways reported that PRASM grew about 4% year over year in April, followed by a 1% gain in May and a 1% decline in June. That implies second-quarter PRASM growth of a little more than 1%: 5 to 6 percentage points better than what Southwest expects.

JetBlue's explosive profit growth
Southwest, Delta, and JetBlue are all benefiting from a relatively similar cost environment in 2015. Non-fuel unit costs are rising little, if at all, while fuel costs are plummeting.

The result is that while Southwest and Delta will both report strong earnings growth in 2015, JetBlue's superior unit revenue growth is driving explosive profit growth. Analysts currently expect EPS to rise 33% year over year at Delta to $4.39. Year-over-year EPS growth is projected at an even better 66% for Southwest, which hasn't been burned by fuel hedging losses to the same extent as Delta.

Meanwhile, JetBlue blows them both away with expected EPS growth of 156%. Based on its stronger unit revenue growth and soaring earnings, it's no surprise that JetBlue stock has outperformed Southwest Airlines stock by a wide margin this year.

This valuation premium for JetBlue seems conservative, if anything. The upcoming expansion of JetBlue's highly popular -- and highly profitable -- Mint premium service, its new "fare families," and an upcoming project to add seats to JetBlue's large fleet of A320s should all help drive further margin growth at the company.

Furthermore, while Southwest Airlines certainly has more growth opportunities (particularly in Latin America and the Caribbean) than legacy carriers like Delta Air Lines, it already has annual revenue of nearly $20 billion. That makes Southwest about three times the size of JetBlue. Not surprisingly, JetBlue's smaller size today gives it more growth potential.

Southwest Airlines is a reliable cash cow and its stock looks like a bargain at a little more than 10 times projected 2015 earnings. But there's a reason its stock has performed more like Delta's and less like JetBlue's -- and it's not just a matter of perception. For Southwest stock to get back on track, the carrier needs to return to unit revenue growth.

Adam Levine-Weinberg is long January 2017 $17 calls on JetBlue Airways and long January 2017 $40 calls on Delta Air Lines, The Motley Fool has no position in any of the stocks mentioned. Try any of our Foolish newsletter services free for 30 days. We Fools may not all hold the same opinions, but we all believe that considering a diverse range of insights makes us better investors. The Motley Fool has a disclosure policy.