The bubble that many feared had gripped China's stock market has officially burst, prompting the government to quell the carnage through a series of controversial steps. 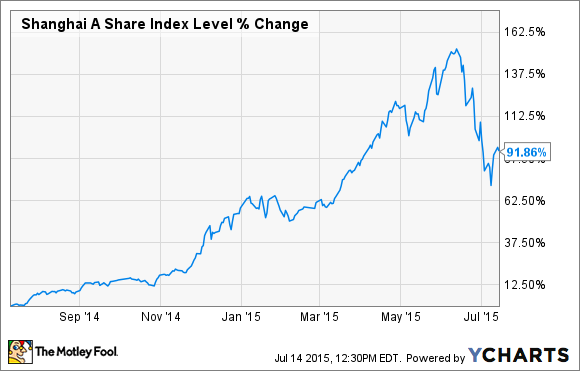 While panicked selling appears to have dissipated in the short term, Chinese equities remain well off their recent highs. At the same time, broad-based hysteria like this can create compelling opportunities to build positions in stocks with attractive long-term fundamentals. So let's turn our attention to one of these relatively cheaper Chinese equities. Search operator Baidu's (NASDAQ:BIDU) recent pullback, for instance, makes it once again an attractive potential addition for tech investors today.

A gem among stones
Despite Baidu's enviable multidecade growth prospects, Baidu's shares were by no means immune to the recent bloodletting in the Chinese stock market. 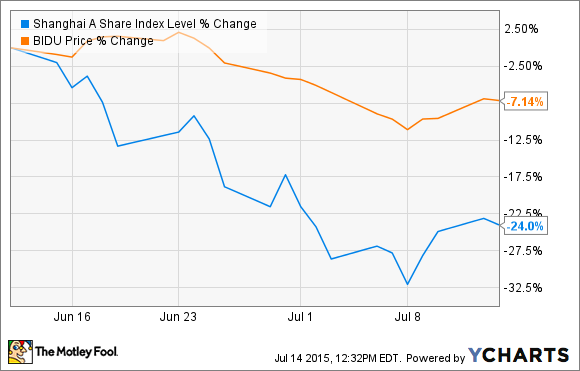 Baidu vs. Shanghai A Share Index, data by YCharts.

All told, Baidu shares have fallen 16% year to date, and the resulting multiple compression makes Baidu worth revisiting as a potential investment candidate. Here's a snapshot of the company's current and estimated future earnings multiples.

There are a few ways to parse this data, but for the purposes of this discussion, I want to focus on the projected FY 2017 multiple. Although we should always take extended earnings estimates with a huge grain of rock salt, the 14 times multiple translates to a roughly 7% earnings yield, or approximately the historical annual stock market returns according to Professor Aswath Damodaran of NYU's Stern School of Business.

The implication here is that the market currently isn't pricing Baidu to grow meaningfully beyond its fiscal year 2017, an assumption that understates Baidu's true long-term earnings growth potential.

Huge untapped potential
Thankfully, for investors interested in investing in Baidu for the long term, a favorable mix of business specifics and market conditions extend its growth profile well beyond FY 2017.

Baidu generates enviable margins and returns on capital, much like its global search counterpart Google (NASDAQ:GOOG) (NASDAQ:GOOGL). Search engines like Google and Baidu offer compelling returns for advertisers, in no small part, because users searching their sites often carry with them "intent."

Intent is the industry term used to describe the increased interest someone has in buying an item for which they search. For example, someone searching for sneakers is generally more inclined to click on and buy from a Nike search ad than someone randomly encountering a banner ad. This isn't always the case, but this dynamic has historically enabled search companies like Baidu and Google to provide an attractive advertising space for interested businesses.

This structural advantage translates into sizable and consistent advertising profits for both search engines. For context, Baidu's operating margin and return on equity both exceed 20% consistently. Suffice it to say, Baidu enjoys an above-average business model that should produce consistent profits for years to come.

The enormous untapped potential of the Chinese search market should enable Baidu to continue to expand for years to come. At present, Internet penetration in China hovers around 47% of the country's population, well below the above-80% levels commonly found in developed economies.

Although the exact timing is anyone's guess, it seems reasonable to expect that China's Internet usage will slowly progress toward developed countries' levels over time. That would roughly double Baidu's potential addressable market. However, Baidu's monetization opportunity lies not only in the growth of its potential user base, but in the massive number of advertisers it could one day service.

According to official 2012 data from the Chinese Ministry of Commerce, China is home to more than 4.3 million small and medium-sized enterprises, Baidu's primary advertising customers. The total number of SMEs has almost assuredly increased in the intervening years. However, Baidu only reported servicing 524,000 online marketing customers during its most recent quarterly report, or about 12% of its potential customers.

Here again, defining an approximate upper limit to the percentage of SMEs Baidu can eventually capture is an imperfect science. However, it seems reasonable to assume that low engagement levels from SMEs will rise given the benefits inherent in Baidu's business model we discussed earlier.

Foolish bottom line
When asked which of the three elements -- team, product, or market potential -- matters most in determining a startup's success, noted venture capitalist Marc Andreessen once argued that the sheer market potential plays the dominant role in an investment's ultimate success. I've often tried extend this line of reasoning to growth companies like Baidu.

As a company sitting directly at the epicenter of a massive technology growth market, with strong economics and formidable competitive advantages to boot, Baidu is poised like few other names to continue to grow for decades to come. So while its valuation might seem aggressive even after its recent pullback, Baidu remains a great pick for investors looking to capitalize on a truly special growth opportunity.