Are investors right to be so optimistic? 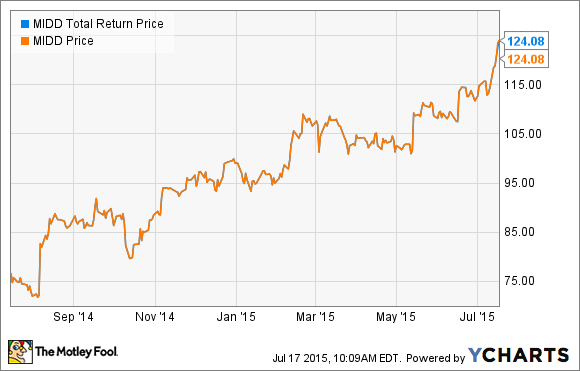 Middleby stock has been on a tear -- and could go up even higher from here. MIDD Total Return Price data by YCharts.

Middleby Corporation (MIDD 0.25%) has been on an acquisition spree.

In its second acquisition in as many months, the fast-growing maker of commercial ovens used in the restaurant business confirmed Wednesday that it has agreed to buy British oven-maker Aga Rangemaster. The deal, valued at $200 million, brings Middleby a new subsidiary doing $400 million in annual sales.

The merger follows Middleby's purchase of all assets of China's Induc Commercial Electronics Co. Ltd., maker of woks, skillets, and fryers based in Qingdoa, China. Middleby did not disclose a purchase price for Induc, but did note that the company had been doing "approximately $10 million" in annual revenues.

What's the deal with Aga?
Aga's business has suffered as demand for its high-end residential "Aga cookers", which can cost $10,000 and up, has taken a hit among financially pinched homeowners. The sales slump cost Aga as much as 65% of its market cap, allowing Middleby to capture a premium brand at a bargain price.

Paying $200 million to acquire an annual revenue stream of $400 million looks like an incredible bargain for Middleby, working out to a price-to-sales ratio of just 0.5 on the deal. For context, Middleby's own shares cost more than four times sales. Accordingly, investors applauded this latest steal-of-a-deal, bidding up Middleby shares by roughly 4% in the two days since the deal was announced -- as well they should.

What it means for Middleby
Even an un-revived Aga will boost Middleby's own annual sales ($1.64 billion last year) by nearly 25%. This suggests that analysts already projecting 20% annualized earnings growth at Middleby over the next five years (according to S&P Capital IQ) will quickly be proven right (or even conservative) as Aga sales begin turning into Middleby profits.

How quickly will those profits materialize? Well, at last report, Aga was just barely profitable on its sales over the past year, earning less than $1 million in profits on $407 million in sales. Even that level of bare profitability, however, has Middleby feeling confident enough to predict that "on a GAAP reported basis, Middleby estimates the acquisition to be accretive to 2016 earnings."

As Middleby works to leverage the scale of its own production, to generate cost savings on Aga's sales, those profits could boom.

The upshot for investors
Granted, it will take time for Middleby to wring costs out of Aga's operations. 25% earnings growth won't materialize overnight. But looked at another way, the strong likelihood of 25% earnings growth, viewed in the context of shares that have risen only 4% since the acquisition was announced ... suggests that right now just might be an excellent time to buy some Middleby stock.

Rich Smith has no position in any stocks mentioned. The Motley Fool recommends Middleby. The Motley Fool owns shares of Middleby. Try any of our Foolish newsletter services free for 30 days. We Fools may not all hold the same opinions, but we all believe that considering a diverse range of insights makes us better investors. The Motley Fool has a disclosure policy.