Solar panel kits have historically been luxury items for landowners and landlords. But a new pilot project by SolarCity Corp. (NASDAQ:SCTY.DL) and utility Xcel Energy (NASDAQ:XEL) has the potential to change all that once and for all. Here's how.

Hand it over, homeowners
From the company that brought residential solar into the 21st century with its financial leasing option, SolarCity has another innovation up its sleeve: community solar gardens. Like many good ideas, it's simple: install community solar installations and allow nearby renters (as well as other users such as schools or low-income homeowners) to purchase solar power directly from the source.

Through the pilot program in Minnesota, participants can buy community solar for $0.13 per kilowatt hour and receive immediate credit from local utility Xcel Energy at a rate of $0.147 per kWh. Customers enjoy 11.5% savings as Xcel stocks up on renewable energy credits. In Minnesota, the utility is required to generate an equivalent of 18% of its electricity from renewable sources.

Partnering with SolarCity is a simple solution to an otherwise arduous undertaking. Xcel can offer its customers a variety of renewable energy options while creating hedging opportunities for the utility, itself. For fiscal 2014, solar power accounted for just 3% of the company's total owned and purchased energy for its northern operations, meaning there still plenty of upside to expanding solar investments without oversized risk.

"In Minnesota, anyone with an Xcel account can access the Solar Community Garden program, whether or not their home or school is optimal for solar or they live in a rental unit, condominium or low-income housing complex," said Dean Leischow, CEO of Sunrise Energy Ventures, the pilot's solar developer, in a press release. "We chose SolarCity as a partner because of its solid track record of residential service and its commitment to help Minnesota rate payers utilize clean power at a savings."

Over the coming years, SolarCity will lay the solar seeds for up to 100 1-megawatt community solar gardens in the Minneapolis-St. Paul area. In Minnesota alone, that expands SolarCity's customer base by 600,000 renters.

Renter revolution
If this pilot program pans out, SolarCity could expand the idea to every renter in America. Across the nation, there are about 108 million renters living in 42 million households. Prior to this pilot, SolarCity's complete customer base necessarily consisted of America's 200 million homeowners living in 74 million houses. That means a solar option for renters expands SolarCity's market by just over 50%.

Stock up on SolarCity? 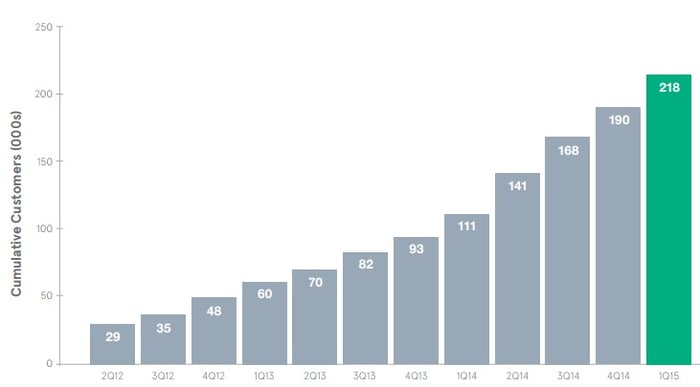 In its first-quarter 2015 earnings report, SolarCity Corp noted that it was 20% of the way to its goal of 1 million customers by July 4, 2018. The company is set to far exceed this number based on previous growth rates, but some investors worry that SolarCity's low-hanging fruit is quickly disappearing. In truth, sunny and solar-friendly states are far from saturated, and 1 million customers represents just 2.4% penetration in the company's current markets. But SolarCity knows it can't keep growing at ridiculous rates forever. With this latest innovation, the company is once again expanding its potential profit. Competitors will surely follow suit, but SolarCity has snagged first-mover advantage yet again -- and this time, it's for all Americans.