Please ensure Javascript is enabled for purposes of website accessibility
Log In Help Join The Motley Fool
Free Article Join Over 1 Million Premium Members And Get More In-Depth Stock Guidance and Research
By George Budwell - Jul 18, 2015 at 10:03AM

Advaxis and Agenus have been two of the best performing stocks of 2015. Can they continue to crush the broader markets or is it time to take profits?

With 2015 halfway over, it's a good time to take a look at the best performing stocks so far and consider if they remain compelling buys heading into the back end of the year. Among healthcare stocks, for instance, Advaxis (ADXS 15.38%) and Agenus (AGEN 5.72%) have been helping set the pace, with each one of these stocks more than doubling in 2015: 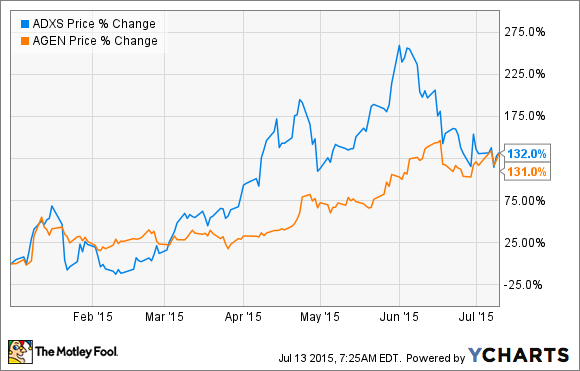 With that in mind, let's consider if these two stocks have what it takes to push even higher.

Advaxis' recent pullback probably isn't a buying opportunity
This cancer immunotherapy specialist saw its stock rise by a staggering 750% after signing two research deals with pharma giants AstraZeneca and Merck & Co. last year. But the recent turmoil in world markets caused Advaxis' shares to give back a decent chunk of these eye-popping gains (down 22% this month), meaning investors might be thinking that now is the time to load up.

In my view, though, Advaxis remains overvalued, making it a speculative biotech that is best left out of your portfolio for the time being. Why? The simple fact is that Advaxis' bioengineered bacterial approach toward fighting cancer has progressed at a snail's pace over the last 13 years (no pivotal late-stage trials have been conducted), and these initial big pharma deals are all backloaded with milestone payments (no cash upfront). In fact, Advaxis has to fund the ongoing trials with its big pharma partners.

So, despite some encouraging midstage trial data for the company's lead clinical candidate, ADXS-HPV, in women with recurrent cervical cancer, Advaxis remains a struggling small-cap biopharma with an unproven platform, and its long-term financing needs will probably have to be met by either dilutive financing or an unfavorable loan agreement. That's why I have a hard time seeing this stock rebound until a major partner steps up to infuse Advaxis with a sizable amount of cash or carry the load in terms of building out its pipeline.

Agenus' immuno-oncology platform is shrouded in mystery, but that may not be a bad thing
Like Advaxis, Agenus has failed to develop a commercially viable product despite being in existence for over 20 years. But with its full-blown entry into the cancer immunotherapy race via its acquisition of multiple ready-made checkpoint proteins and an antibody discovery platform in the 4-Antibody deal, Agenus has been able to secure a $60 million investment from Incyte and ink another lucrative research agreement with Merck & Co.

The rub on the Street, though, has been that Agenus, and its partners, haven't exactly voiced which clinical product will lead them to the promise land -- instead offering investors a host of potential therapeutic candidates that could one day turn into blockbusters.

My counterargument is that this has been the norm among immunotherapy companies developing checkpoint inhibitors for some time now, and this practice stems from the intense competition that is expected to exist in the marketplace going forward. Merck, for example, remained elusive about Keytruda's clinical progress for months. And Pfizer has revealed surprisingly little about its own immuno-oncology platform.

In short, Agenus will probably wait until the path of least resistance toward a regulatory approval is evident before filling investors in on the details. While that may be frustrating for some, my view is that immuno-oncology is going to be such a big market that Agenus only needs to capture a tiny sliver of it for this stock to be a compelling buy at current levels.

Looking ahead, Agenus already has a stable of checkpoint proteins (GITR, OX40, LAG-3, and TIM-3) getting ready to enter clinical trials, with more on the way. So they would have to really have some bad luck to totally fail to capture at least a portion of this vast and growing market.

Are either of these stocks buys right now?
Although caution is warranted with any stock that doubles in a mere six months, I think Agenus remains an intriguing long-term buy because of the diversity of its immuno-oncology program, along with its other clinical assets in the realms of heat shock protein-based vaccines and Saponin-based adjuvants. One clinical failure therefore won't completely derail the company's clinical program, or presumably wreck its share price. Advaxis, though, simply can't offer that kind of moat against total failure, given that its entire platform is based on a single modified bacterium being tested across a swath of malignancies.