Please ensure Javascript is enabled for purposes of website accessibility
Log In Help Join The Motley Fool
Free Article Join Over 1 Million Premium Members And Get More In-Depth Stock Guidance and Research
By Brian Orelli, PhD - Jul 19, 2015 at 10:08AM

"Stretched" valuations in biotech? No, not really

"Valuation metrics in some sectors do appear substantially stretched -- particularly those for smaller firms in the social media and biotechnology industries, despite a notable downturn in equity prices for such firms early in the year."

Selling your biotech companies, on the other hand, was costly. 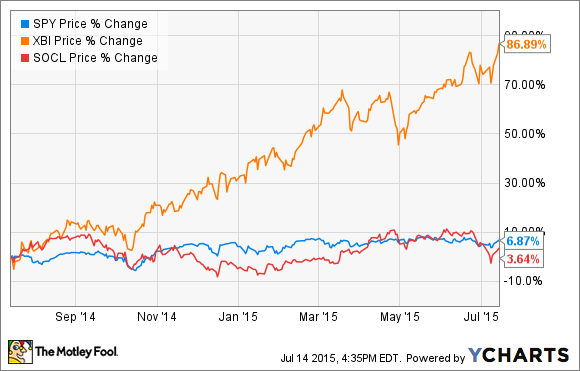 Why Yellen was so wrong
First and foremost, it's hard to call the top. Yellen didn't exactly do that, but calling valuations stretched certainly implies that she didn't think biotechs would zoom up 87% on average.

To explain why Yellen's prediction didn't come true, we have to take a step back and look at how smaller biotech companies without any revenue are valued. They're typically considered overvalued -- or "stretched" if you'd like to use Yellen's term -- when the risk of holding them doesn't justify the potential reward.

If a company has one drug that has a 50% shot at working, but the value will only go up 10% if the clinical trial works because the share price has already run up so much, the biotech is overvalued.

Conversely, if you expect the share price to more than double, holding the company is a good deal assuming your 50% risk estimate is correct. You'll only be right about half the time, but if you hold enough companies with similar prospects through their binary events, you'll end up ahead in the long run.

Two things have happened over the last few years to help biotechs produce outsized returns: there's a higher likelihood of clinical and regulatory successes and potential valuations after those successes are higher. The combination is a recipe for higher valuations that aren't necessarily "stretched."

Clinical success has increased as the industry has gained experience with picking the right drug targets. More importantly, the Food and Drug Administration has lightened up on requirements -- arguably because the data is also better -- making it easier for companies to get their drugs on the market. Both changes have increased the likelihood of success. The aforementioned 50% shot at working might be 60% or 70% now.

Potential valuations have also increased over the last few years. A company with just one drug on the market that might have been worth $1 billion or less a few years ago is now with $2 billion or more. There are plenty of examples of one-drug wonders worth much more than that. 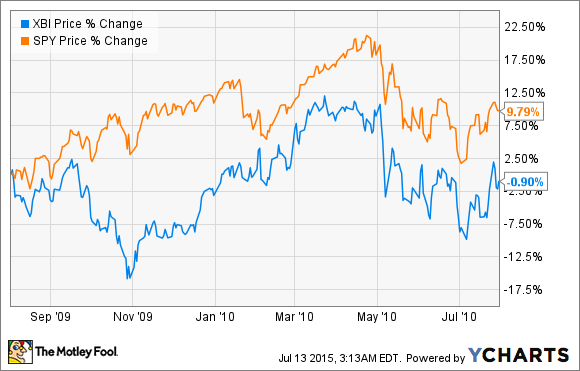 The potential for acquisition has also driven up prices. This week, Celgene only paid a 12% premium on the takeout of Receptos, but that's because shares in Receptos are up about 450% over the last year.

Wrong or just early?
The typical cycle of investors into the biotech industry starts with investors seeking relatively safer larger biotechs and as those investors become more comfortable with risk, they gravitate toward smaller, riskier biotechs.

That phenomena is evident when comparing the returns of the iShares Nasdaq Biotechnology (IBB), which follows a weighted index and is therefore dominated by the largest five biotechs that make up about 38% of the holdings, to the returns of the SPDR S&P Biotech ETF, which is equally weighted. Because of the differences in weighting, changes in valuations of smaller biotechs are a bigger driver of change in the value of the ETF than in the value of the iShares Nasdaq Biotechnology.

In the year prior to Yellen's comments, larger biotechs outperformed their smaller brethren. Since then, smaller companies have dominated. 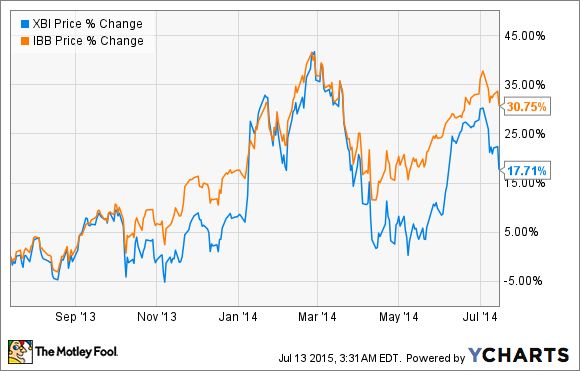 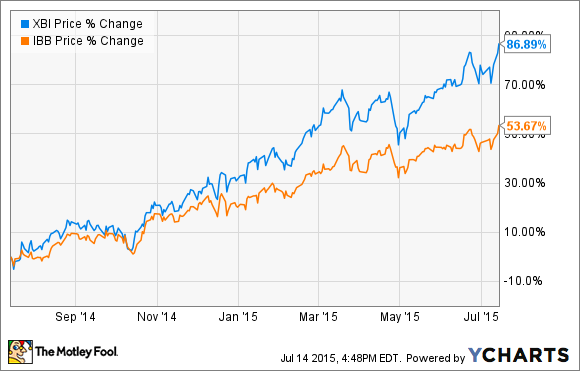 If history repeats itself, the flight to safety will happen in reverse with investors moving from more-risky development-stage biotechs to the larger biotechs. And then eventually lightening up on the sector altogether.

Biotechs will correct
I'm not calling a top here. But it's inevitable that biotechs will experience a correction at some point. Valuations don't keep going up in a straight line forever.

It's difficult to identify when companies are truly overvalued and ready for a correction -- as Yellen found out the hard way. Investors that want to continue to hold biotechs so they don't miss a further run up can hedge their bets by buying companies with upcoming catalysts, which shouldn't be hurt as much during a downturn.

Alexion Pharmaceuticals, for instance, has an upcoming FDA decision on September 8 for Kanuma, its treatment of lysosomal acid lipase deficiency. Alexion gained rights to Kanuma after acquiring Synageva BioPharma earlier this year. Kanuma was given a priority review, a sign the agency thinks the drug has potential to treat the genetic disease that has no approved treatment.

And there are plenty of companies with upcoming clinical trial data, including XOMA that's scheduled to present data for gevokizumab in a rare multisystem inflammatory disease called Behçet's disease uveitis this week, which often affects the eye. The trial, dubbed EYEGUARD-B, which is being run by XOMA's partner Les Laboratories Servier, probably won't be enough to get the drug approved in the U.S., but XOMA has already started a U.S.-based trial that should be able to serve as a second pivotal study. If EYEGUARD-B is successful, the U.S.-based trial will be substantially de-risked.

Whether it's an FDA decision or a clinical trial result, an upcoming binary event will keep many investors from hitting the sell button because they know there's a potential for a larger payout around the corner.

Brian Orelli has no position in any stocks mentioned. The Motley Fool recommends Celgene. Try any of our Foolish newsletter services free for 30 days. We Fools may not all hold the same opinions, but we all believe that considering a diverse range of insights makes us better investors. The Motley Fool has a disclosure policy.