While the price of natural gas is down more than 40% over the past five years, that hasn't stopped natural gas companies from producing huge cash flows from the commodity. In fact, last year Chesapeake Energy Corporation (OTC:CHKA.Q), Southwestern Energy Company (NYSE:SWN), and Cabot Oil & Gas Corporation (NYSE:COG) all delivered more than $1 billion in cash flow from operations in 2014 thanks to their robust natural gas production. That said, all three companies are reinvesting nearly all of that cash flow back into new wells leaving little left over for their shareholders.

In one door and out the other

Chesapeake Energy led the pack last year as it delivered more than $5 billion in operating cash flow. Driving that cash flow was the company's natural gas production, which was up 6% from the prior year after adjusting for asset sales. However, as robust as that cash flow sounds, Chesapeake Energy spent more than $5.1 billion on capital spending last year just to fund oil and gas development. On top of that the company spent a further $1.6 billion on other capital items such as capitalized interest, cash for a property exchange, and the sale leaseback of drilling rigs. Add it all up and Chesapeake Energy actually spent more than $6.7 billion last year, though, it did pick up nearly $5 billion in cash from a major asset sale to Southwestern Energy at the end of the year.

Given the weakness in commodity prices in 2015, analysts expect Chesapeake Energy's cash flow to be much lower this year. Oppenheimer, for example, only expects the company to produce $2.1 billion in operating cash flow this year followed by $1.5 billion next year. Given its current spending plan as well as other cash outflows like dividends, it puts Chesapeake Energy on pace to outspend its cash flow by $2.1 billion this year and another $2.7 billion in 2016. Suffice it to say that while Chesapeake Energy generates huge cash flows each year, it continues to spend more than it makes, which is why it keeps selling assets to bridge the gap.

Cash flows in both directions here, too
As the nation's fourth largest natural gas producer, Southwestern Energy also produces a lot of cash flow. In 2014 the company produced a record $2.3 billion in net cash provided by operating activities. That said, like Chesapeake Energy it outspent its cash flow last year as it invested $2.4 billion in total capital investments. That doesn't include the $5 billion it forked over to Chesapeake Energy at the end of the year for assets in the Marcellus shale.

Looking ahead to 2015, the company is expected to continue to outspend its cash flow once again. Currently, it plans to invest slightly more than $2 billion on capex in 2015. However, as the following slide notes, its net cash flow is projected to be well under that amount given its current commodity price assumptions. 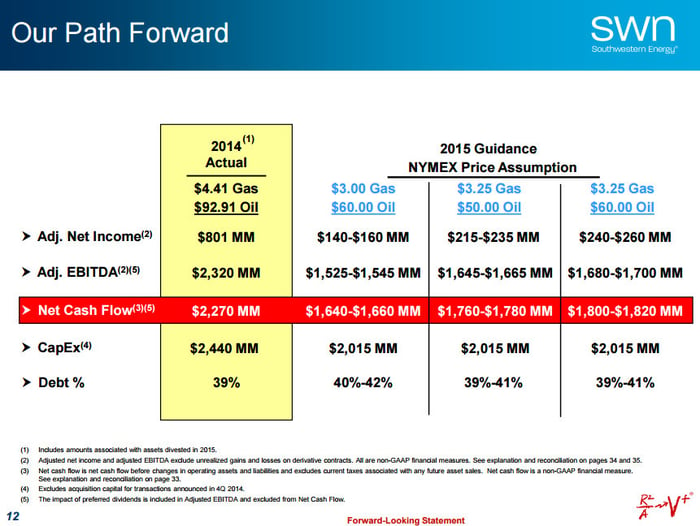 As that slide makes clear, the company's high case for its cash flow in 2015 is banking on $3.25 per thousand cubic feet of gas--mcf--and $60 per barrel of oil to deliver $1.8 billion in cash flow. However, at the moment gas is closer to $2.75 per mcf while oil is heading toward $50 a barrel, suggesting that like Chesapeake Energy its cash outspend will be very wide in 2015.

Same story, different name
Like its natural gas producing peers, Cabot Oil & Gas also produced a gusher of cash flow in 2014. In fact, like Southwestern Energy it too set a new record for cash flow from operations as it delivered $1.2 billion in cash flow last year, which was 21% higher than 2013. However, the company used more cash than it produced as it bought back $139 million of its shares, paid $33.3 million in dividends, spent $214 million on acquisitions, and a whopping $1.5 billion on capex.

Cabot Oil & Fas is expecting to be much more disciplined in 2015 as its capex plan has been cut 45% to just $900 million. It's a plan that is expected to align its capital budget with anticipated operating cash flows based on a budget for $2.45 per mcf of gas and $55 per barrel of oil. Further, the plan should actually work as those have proven to be conservative commodity price assumptions so far. As a result, it might be the only one of the three not to vastly outspend its cash flow in 2015.

Investor takeaway
The lesson here is pretty clear, just because a natural gas company is producing billions of dollars in cash flow it doesn't necessarily mean the company is swimming in cash. In fact, the opposite has proven to be true as all three companies outspent their cash flow in 2014 while most are on pace to do the same this year. It's a plan that will only work for so long as the cash they borrow, or the assets sold, will eventually run out.