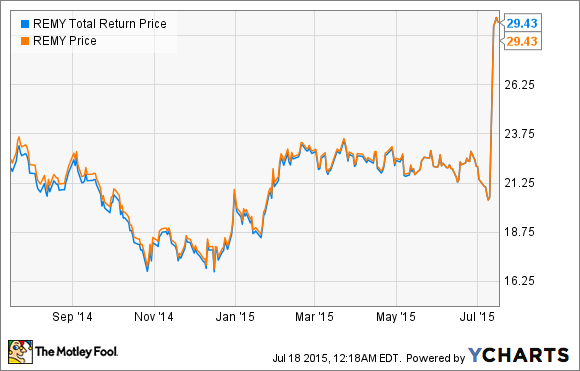 Something amazing happened to Remy International's stock price last week. Gee, I wonder what that might have been? REMY Total Return Price data by YCharts.

BorgWarner (NYSE:BWA) has an urge to merge -- but shareholders aren't 100% certain that's a good thing.

News that Borg will acquire engine-parts maker Remy International (NASDAQ: REMY) in a $1.2 billion merger sparked a 2.2% rise in BorgWarner stock when the deal was first announced last week. (Remy, as the acquiree, naturally experienced an even larger price spike -- 42%.) One week later, Remy has held on to its higher stock price. BorgWarner, on the other hand, has lost all of its gains -- and then some.

In part, you can attribute the decline in BorgWarner's stock price to a downgrade from British banker Barclays. On Thursday, Barclays removed its "overweight" ranking on Borg, and slashed its target price from $70 to just $55 a share, not far from where BorgWarner trades today.

According to Barclays,  Chinese car sales slipped 3% in June, and sales of both automobiles and auto parts are expected to decline further in H2 2015. With China accounting for about 40% of BorgWarner's backlog, says Barclays, this makes Borg vulnerable to a slowdown in the Middle Kingdom.

Indeed, according to data from S&P Capital IQ, China has been Borg's fastest-growing market these past few years, with sales there more than doubling since 2011. Any slowdown in China is bound to put a crimp in Borg's earnings growth rate (currently projected at 13% annually over the next five years).

That said, it's not all bad news for Borg. One month's results -- or even one half-year's -- are not necessarily indicative of where China's going in the future. The country may yet pull out of its automotive slump. And even if it doesn't, Borg got barely 10% of its sales from China last year. Even a major slowdown in that market won't be fatal to Borg's business.

But if China's not the whole story behind BorgWarner's share price slump, then what is?

Could it be... Remy itself?

Relative to Remy's annual sales of $1.2 billion, that works out to an enterprise value-to-sales ratio of 1.0, or a (more standard valuation) price-to-sales ratio of 0.8. Meanwhile, Borg's own stock sells for a P/S ratio of 1.4. So either way you look at it, when valued on sales, Borg appears to be getting Remy on the cheap. But there's a third way to look at valuation on this acquisition.

BorgWarner, you see, is a much more profitable operation than Remy. Over the past 12 months, Borg earned an 8.2% net profit margin on its $8.3 billion in sales. Remy's profit margin, in contrast, was a mere 1.5%.

Because Remy is so much less profitable than Borg per dollar of revenue, Remy's price-to-earnings ratio is actually three times more expensive than Borg's -- 53 times earnings, versus Borg's 17.6 times earnings valuation. Simply put, if Remy looks like a bargain when its shares are valued on P/S, it's anything but a bargain when you value it on P/E.

The future for Remy and BorgWarner
For this deal to make sense, BorgWarner must work hard, and fast, to wring efficiencies from its new prize. Borg management thinks this is possible, saying it "has identified purchasing efficiencies, redundant public company expenses, other cost synergies and numerous opportunities to accelerate growth through the combined business." With these costs cut, Borg believes the deal will "be accretive to earnings in the first year."

The good news is that at the price Borg is paying, bringing Remy's P/E down to Borg's level (or put another way, bringing its profit up) should require no more than a tripling of Remy's current abysmal net profit margin. Were Remy earning 4.5% margins on its $1.2 billion in profit, its net profits would be $54 million instead of less than $18 million, and its $950 million market cap would be only 17.6 times those hypothetical profits -- equivalent to Borg's valuation. And while a big jump, 4.5% net profits would still be only about half the level of profitability Borg already gets from its own operations.

Ordinarily, tripling a subsidiary's profit margin would seem like a tall order. But Borg must believe this is possible -- because it's already earning even better profits itself. If it can just teach Remy to do likewise, this deal could actually start to make sense -- and BorgWarner's stock price can start to head north again.

BorgWarner to Remy: You Will Be Assimilated @themotleyfool #stocks $BWA Next Article
Current