Early investors in BioMarin Pharmaceutical (NASDAQ:BMRN) must be smiling from ear to ear, as the company has emerged as one of the most successful rare disease drug developers in the world. The company's orphan drug focus has proven to be a winning strategy, having rewarded patient investors with years of outperformance. Now the question is, is the stock a buy today or has the company's valuation gotten ahead of itself? 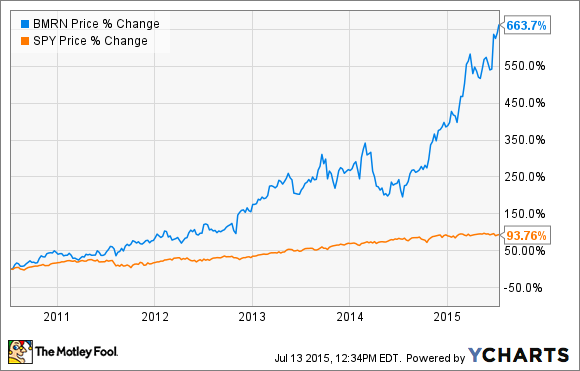 What is an orphan drug?
Some diseases are so rare that they only affect a few thousand patients around the world. With such a limited patient population, drug developers would likely balk at devoting resources to researching treatments for these diseases, as the market opportunity simply isn't naturally large enough to justify the costs. However, with more than 7,000 rare diseases classified there are currently more than 25 million Americans alone who have a rare disease, which creates a huge unmet medical need.

In order to help correct this situation, in 1983 congress passed the Orphan Drug Act, which helped to incentivize drug developers to create products for patients with rare diseases. This act defined a disease as rare if fewer than 200,000 people in the United States have it, and it created tax credits to help defray the cost of clinical studies for these diseased, waived filing fees, allowed for a seven-year period of exclusive marketing after an orphan drug is approved, and more.

Drug developers certainly took notice of these incentives, and when combined with the fact that there would naturally be much less competition to treat each individual rare disease, suddenly the economics made sense. The act has been hugely successful in achieving its objective, and since the passage of the bill more than 400 orphan drugs have been brought to market.

Small patient populations, big revenue opportunities
Since its founding in 1996, BioMarin has been researching orphan drugs, and has successfully commercialized five of them. Despite the fact that each of these drugs targets relatively small patient populations, strong pricing for the drugs have combined to create big revenue. Last year, the company sold $751 million worth of its orphan drugs, showing a strong 37% growth rate over 2013 results.

Though the company boasts five drugs on the market, the majority of its sales come from just three: Kuvan, Naglazyme, and recently launched Vimizim.

Kuvan helps to treat phenylketonuria, or PKU, which afflicts about one of every 15,000 infants in the United States and inhibits the patient's ability to properly process phenylalanine, an amino acid found in many common foods. Without the ability to process phenylalanine, high levels build up in the blood, which causes behavioral and cognitive problems. Kuvan helps to treat the disease by reducing phenylalanine levels in the blood. Sales of the drug grew 21% in 2014, bringing in more than $200 million in revenue.

Naglazyme is an enzyme replacement therapy that treats Maroteaux‐Lamy syndrome, an extremely rare disease that affects only about 1,100 people worldwide. Naglazyme works by providing the enzymes that are needed for cells to function properly, which helps to alleviate the symptoms of the disease. Sales of Naglazyme were up 23% in 2014, which brought in $334 million of revenue.

Vimizim is an enzyme replacement therapy that is used to treat Morquio A, a metabolic syndrome that occurs in about 1 of every 200,000 births and prevents the body from properly breaking down sugar. Vimizim launched in 2014, and the drug brought in $77 million in revenue during the year. Management predicts continued success for the drug, guiding for Vimizim to bring in revenue between $200 and $220 million for 2015.

Management is guiding for continued growth for each of these drugs. When combined with the company's other two drugs on the market, management is calling for revenue in the $850-$880 million range for 2015, which would represent year over year growth of 15% at the midpoint.

What's in the pipeline?
Beyond the already approve drugs on the market, BioMarin has a strong pipeline of opportunity that could continue to drive growth in the years ahead. 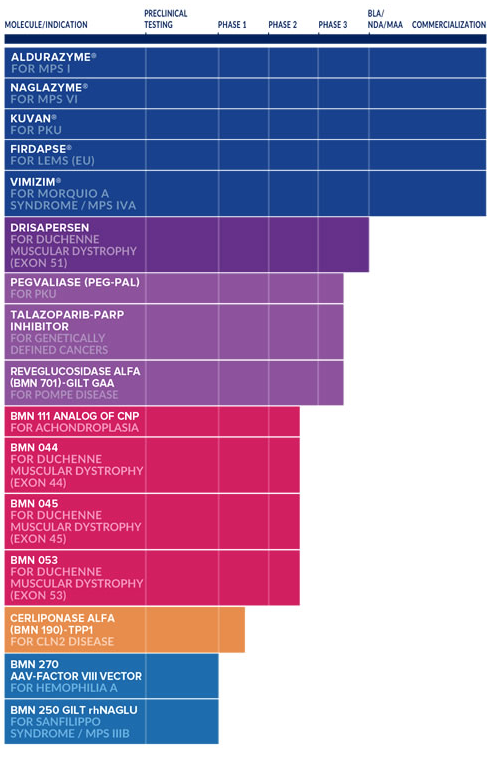 While there are several therapies for investors to be excited about here, there are a two that caught my attention and are worth highlighting.

The first is drisapersen, which BioMarin brought into its pipeline with the acquisition of Prosensa Holdings and is the furthest along in clinical development. Drisapersen is a treatment for Duchenne muscular dystrophy, a terrible disease characterized by the weakening of the muscles of the body that affects roughly 1 in 3,500 newborn boys.

Drisapersen is designed to treat approximately 13% of patients with a specific genetic mutation underlying Duchenne muscular dystrophy, and in June 2013 the drug was granted breakthrough therapy designation by the FDA. BioMarin successfully submitted the drug to the FDA for review in June, and should have a decision by December of this year. Peak sales estimates for the drug are around $500 million.

Another candidate that caught my attention is BMN-111, which is a treatment for children with achondroplasia, the most common form of human dwarfism. Results from a phase 2 study were recently released, in which patients treated with BMN-111 showed a 50% increase in mean annualized growth velocity when compared to their previous growth rate, and the therapy appears to be well tolerated.

The company estimates that it has a current addressable market of 24,000 patients for BMN-111, and analysts are calling for peak sales of the drug of $2 billion, which represents an enormous opportunity.

All for a price
While BioMarin certainly has a great current portfolio of drugs and a strong pipeline of opportunity, the market has really been bidding up the stock recently, pushing the price-to-sales ratio to a five-year high. 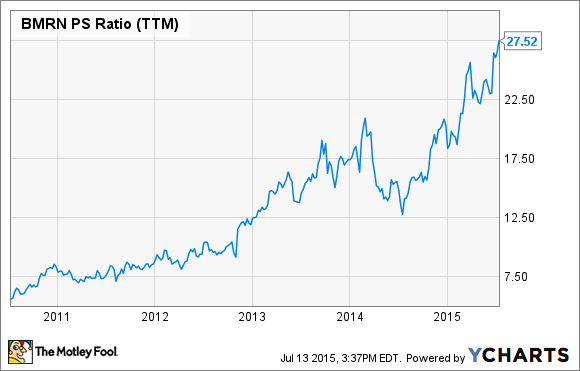 With a current price-to-sales ratio of more than 27, BioMarin's stock already has a lot of good news priced in and the market appears to be placing a huge value on the company's pipeline of products. While there is plenty of reason to be optimistic about the company's future, I'm personally going to watch from the sidelines for now, as I think the valuation has gotten ahead of itself. The long-term opportunity here looks quite compelling, and I'll continue to follow the progress of the company closely, but I'd want a more attractive entry price before I could personally call the shares a buy.