Casual eatery and brewpub operator BJ's Restaurants, Inc (NASDAQ:BJRI) turned in second-quarter earnings today, and they were a bit mixed -- and not like the company's "Best Beginnings" appetizer combo, which is all good. There was some good news, and some not-as-good news. The highlights:

In short, the profitability metrics are fantastic, but the company continues to struggle to increase traffic. Let's take a closer look at the details.

Project Q paying off
The company's efforts to rebuild its offerings from the kitchen forward are working out well. The revamped menu is clearly helping drive kitchen costs down, while at least retaining similar traffic from prior periods, which certainly beats seeing the declines from prior years. As a matter of fact, the small increase we saw this quarter means the company has increased comps four quarters in a row.

Expansion remains slow and steady
The company's current store format is also helping drive the bottom line. According to prior comments from management, this format costs as much as $1 million per store less than the prior format, giving further flexibility when it comes to expansion or other capital plans.

I'm sure most shareholders would like to see the company increase its rate of expansion, but for now, the focus remains on share buybacks. While this has helped increase per-share earnings, BJ's is still very early in its growth phase, with 165 total locations in 21 states, and a stated goal of at least 425 restaurants. The company says it will open six new locations in the current quarter.

Adding debt to buy back shares
The company's long-term debt is now at $74.7 million, up from zero one year ago, while its cash position is slightly down. In short, the company has used debt to pay for much of its stock repurchases during the past year, having just completed $146.5 million in share buybacks. The board recently approved an additional $50 million in share buybacks.

Based on the company's actions during the past year, there's a good chance that at least part of those buybacks are funded with debt, though we can hope that cash flows pay for most of it.

Activist investors: Helping or hindering?
Casual sit-down restaurants continue to operate in a tough growth environment, with a lot of competition from other chains, as well as pressure from fast-casual alternatives. BJ's also has the pressure of a group of activist hedge funds having a substantial stake -- some 20% -- in the company.

The share buyback program is something that these hedge funds essentially forced management into, and as long as this group maintains a large stake, it will have a lot of influence on the company's actions. That can be good (earnings-per-share growth), and maybe not so good (a decelerated rate of expansion).

For now, though, the company has definitely shown that it can make nice profits in a very competitive business. It would be nice if it could use more of those profits (or some of that debt) to open stores at a higher rate, but you can't have everything. Besides, it's pretty hard to argue with the results since these activists started making noise last year. 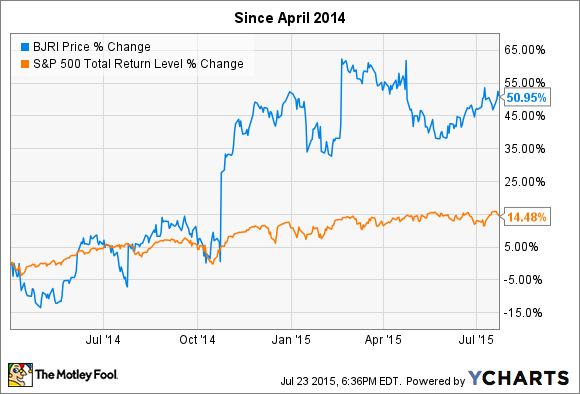