The big picture numbers when Celgene (NASDAQ:CELG) released second quarter earnings Thursday weren't surprising since the company pre-released its revenue and earnings when it announced the acquisition of Receptos last week.

But the details of where the growth is coming from are still helpful for investors to gauge Celgene's future.

As a reminder, Celgene produced $2,254 million in sales in the second quarter, a 22% year-over-year increase compared to the second quarter of 2014. Almost all of that growth came from an increase in volume. A modest 2.5% price increase was mostly offset by a negative effect from the stronger dollar.

Sales of Celgene's top-selling drug, Revlimid, increased 19% year over year thanks to the addition of sales as a first-line treatment for multiple myeloma, which was approved in February. Treating patients earlier helps with sales because there are more available patients and because treatment durations tend to be longer for newly diagnosed patients. The bump in sales from the new indication will continue into next year since Celgene is still setting up reimbursement for the new indication in Europe.

Pomalyst is on the verge of passing Abraxane for second place in sales thanks to a 46% increase in sales. Much of the sales growth came from international sales, where the launch had just began so sales were small in the year-ago quarter, but U.S. sales are also progressing nicely, jumping 38%. The addition of overall survival data to the drug's label should help grow sales further.

After about a year on the market in the U.S., Otezla's still aren't all that high -- just $85 million in the U.S. in the second quarter -- but that's to be expected given the crowded market. The launch actually looks pretty good compared to recent launches of other drugs to treat autoimmune diseases. 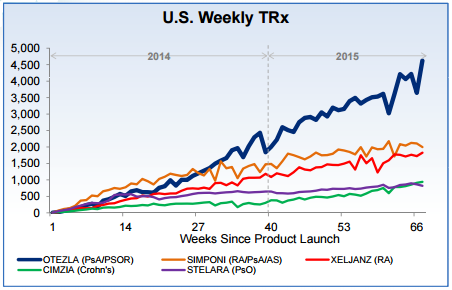 Celgene recently started direct-to-consumer advertisements as it goes after AbbVie's Humira. Only 14% of new patients are coming off of biologics, such as Humira, so there's plenty of potential to capture more of the market share, which sits at just under 20% of patients.

Adjusted earnings, which adds back upfront collaboration expenses and share-based compensation, came in at $1.23 per share. If you subtract out $0.06 for a one-time investment gain, adjusted earnings per share were still 30% higher than the $0.90 per share seen in the second quarter of 2014.

Most of the discrepancy in the 22% revenue growth and the 30% earnings growth comes from reduced expenses, which helped increase Celgene's operating margin by 100 basis points. A lower share count thanks to the share buyback -- $900 million of repurchases in the second quarter alone -- also helped grow the earnings per share number. The buyback will continue to be a growth driver with $5.1 billion remaining on the board's buyback authorization.

Celgene raised its guidance for adjusted earnings per share for this year to between $4.75-$4.85 from the previous range of $4.60-$4.75. If it hits the midpoint of the new guidance, year-over-year growth will be approximately 29% above 2014 adjusted diluted EPS. The increasing in guidance is especially impressive considering the company will be incorporating Receptos' research and development expenses and interest expenses on the loan Celgene will take out to help pay for the acquisition that will close later this year.