Starbucks' Reserve Roasters is just one of many growth initiatives underway. Source: Starbucks.

Starbucks (NASDAQ:SBUX) just announced results for its third quarter, and it's hard to find a word besides "excellent" to describe it. The highlights:

Everything's not perfect; but frankly, it's pretty darn close. The company improved its performance in nearly every key metric in the third quarter. Let's take a closer look at the key details.

Growing sales and margin everywhere
I've written about how important the company's core Americas segment is, as well as how CAP, or China/Asia Pacific, is the key to long-term growth. The company has also used a balance of both company-operated and licensee-run stores to grow both quickly and cost-effectively -- as we saw with the Starbucks Japan move -- when it's time to bring stores into the company fold. Starbucks grew operating margins in all three of its markets sequentially, and improved the metrics from last year in all segments except CAP:

This is a positive trend, and it's being driven, at least partly, by that 4% increase in store traffic, the strong pricing power that the company has, and what looks like a regularly improving mix of sales. While the CAP segment's operating margin percentage is well below last year's, it's important to look at it within the context of the company's recent Starbucks Japan acquisition.

When Starbucks acquired its Japanese licensee late last year, it added more than 1,000 stores to its operations, which essentially doubled the number of company-operated stores in the segment, and doubled operating costs along with it. Because the company's plans moving forward are that the majority of net new stores opened in the region will be operated by licensees, operating margins in the CAP segment should continue to increase over time.

Traffic and comps: The brand and the economy
There's no doubt that strong economic conditions in the U.S. were a positive factor for Starbucks' performance this quarter. After all, the bulk of the company's stores and sales are still domestic. But it's also a product of the company's initiatives to improve its offerings, and expand them into more dayparts. Both play a role in the 4% increase in traffic in The Americas, the company reported.

But it's likely that the strong brand equity the company has is helping drive international growth, with a huge 10% jump in China/Asia Pacific traffic, and a small 2% increase in EMEA despite economic woes in much of Europe.

It's not completely clear how much longer the company can continue growing traffic in its core domestic market, but the majority of its business still happens before noon. This leaves a big part of the day open in most of its stores to grow things like the "Starbucks evenings" program offering beer, wine, and small plates, continually improving its food options for all times of the day, and adding more non-coffee items to the menu.

There are also initiatives like delivery, which it's slowly rolling out, and the recent announcement that Mobile Order & Pay -- which lets you order on your smartphone and skip the register completely -- will be pushed out to all company-operated U.S. stores by the holiday season.

Buying back more shares
Before the earnings release came out, the company announced that it was increasing its existing share repurchase program, adding another 50 million shares to the 11 million still approved to buy back. There's no expiration on the program, which frankly is probably the best way to operate these programs, because it doesn't create a manufactured deadline to "spend the money." Instead, the company can buy back shares when the price is reasonable, and when there's not a better use of that capital to invest back in the business. 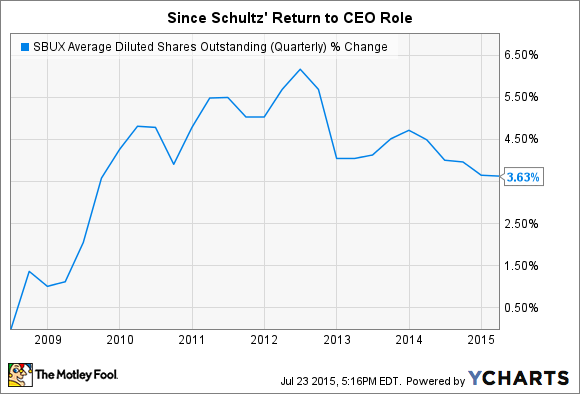 The company carries about $3.5 billion in debt that is relatively cheap, and carries around $1.7 billion in cash, so this plan -- especially considering that there's no time limit -- shouldn't create any financial pressure on the company. The share count actually increased about 6% between 2008 -- when CEO Howard Schultz came back -- and 2012, so it's looking like management wants to bring it back down to pre-recession levels.

Keeping it hot
The company really is -- as much as I hate this metaphor -- firing on all cylinders. Management continues to find ways to grow traffic and sales in The Americas, while the brand is clearly resonating in growth markets like Asia -- at least based on the traffic and comps growth in recent quarters. Considering that almost 15,000 of the company's 22,519 stores are in The Americas versus 5,239 in China/Asia Pacific, it looks like there's still a lot of room to grow, too.

Mobile payments isn't even the fastest way to get your Starbucks anymore, with Mobile Order & Pay getting rolled out to the entire U.S. by the holiday season. Source: Starbucks.