Please ensure Javascript is enabled for purposes of website accessibility
Log In Help Join The Motley Fool
Free Article Join Over 1 Million Premium Members And Get More In-Depth Stock Guidance and Research
By Rich Smith - Jul 24, 2015 at 6:35AM

One earnings beat doesn't defuse fears over a business misstep. 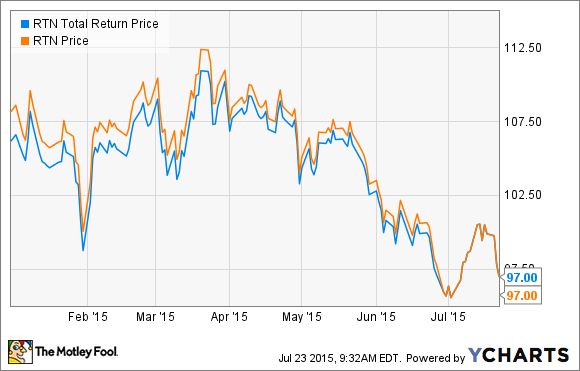 Raytheon's stock chart so far this year. Does it worry you as much as it worries me? RTN Total Return Price data by YCharts.

Rocket-maker Raytheon (RTN) reported earnings Thursday, and we might as well get the bad news out of the way: earnings guidance is going down.

Instead of the $6.67 to $6.82 in "earnings from continuing operations" that the company had previously told us to expect in 2015, the company now expects to earn only $6.47 to $6.62. Hence the one number that might worry you: $0.20 -- the amount the company just cut from earnings estimates.

The rest of the story
But now that we've got that out of the way, it's time for happier news, because every other number that Raytheon reported on Thursday was simply terrific! Here's a quick rundown:

For that matter, even the guidance containing the lowered earnings target for this year wasn't all bad. Raytheon:

Helping to grow sales was a tremendous quarter for new orders. Bookings of new orders for the quarter amounted to $7.6 billion, or 1.3 times the sales Raytheon pushed out the door in Q2. And the book-to-bill ratio for the year-to-date is now 1.1.

But about that $0.20...
Yes, the $0.20 reduction in the earnings guidance is disturbing. Raytheon noted that it's basically due to dilution from the company's purchase of Websense back in April -- an acquisition that you'll recall I was not too keen on.

And I'm still not.

Chief Financial Officer Toby O'Brien told Reuters this week that he's "still excited about that acquisition" because "threats that companies face continue to grow." But the memory of General Dynamics' (NYSE: GD) massive earnings writedown after its own dive into IT continues to smart  -- a $2 billion asset impairment that pushed the company into its only full-year loss in a quarter century, and all because General Dynamics saw a future in cybersecurity. What's more, at the same time Raytheon is diving into the cybersecurity market, rival Lockheed Martin is heading for the exits, planning to sell or spin off a commercial IT business that earns some of that company's weakest profit margins.

Long story short, despite undeniably strong results in Q2, I just can't get excited about Raytheon rushing into a business where so many other companies fear to tread.

Fool contributor Rich Smith owns shares of Raytheon -- but as you can probably tell, he's starting to have second thoughts about that. You can find Rich on our virtual stockpicking service, Motley Fool CAPS, we he publicly pontificates under the handle TMFDitty, and is currently ranked No. 338 out of more than 75,000 rated members.