The rocks that make up the Marcellus and Utica shale plays are absolutely saturated with natural gas. So much so that natural gas drillers that concentrate on those two shale plays are booking unbelievable amounts of proved natural gas reserves. It's a fact that investors seem to be missing as they are really undervaluing the potential future production of these companies. That's something that's made clear when we look at the amount of proved natural gas reserves these companies have booked and compare that to the company's enterprise value. When we do that we find out that Antero Resources (NYSE:AR), Range Resources (NYSE:RRC), and Southwestern Energy (NYSE:SWN) are the three best natural gas stocks by reserves.

An enormous supply of natural gas

As of the end of last year Antero Resources, Southwestern Energy, and Range Resources had proved natural gas reserves on the books totaling 12.7 trillion cubic feet equivalent (Tcfe), 10.7 Tcfe, and 10.3 Tcfe, respectively. For perspective, that meant that each company had enough natural gas to meet the energy needs of at least 10 million households for the next 15 years. Further, for companies of their size, with enterprise values just north of $10 billion apiece, these three natural gas giants controlled the most natural gas reserves in their peer group. 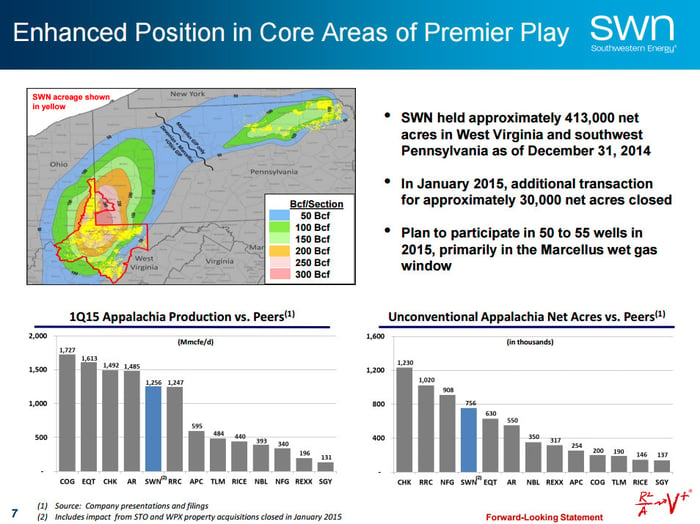 As the map on that slide shows, its acreage is right in the middle of the best sections of the Marcellus and Utica shale plays that have the most gas per section. It's this strong position, where the most gas is trapped, that's driving Southwester Energy's ability to book proved reserves, which is why its proved reserves are up more than sixfold since 2007. 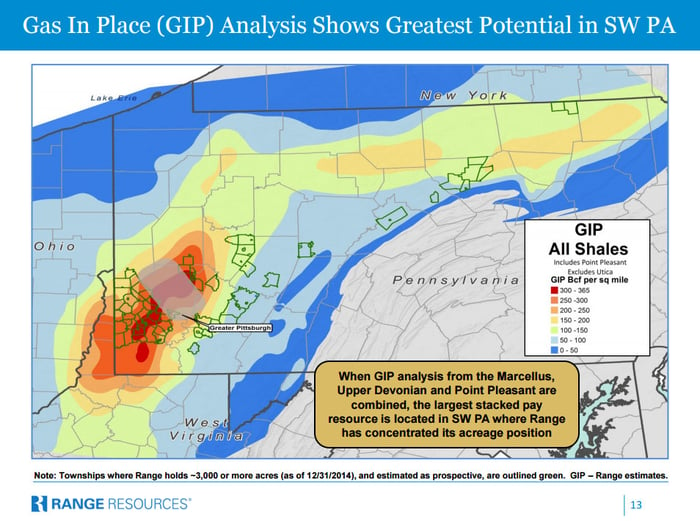 Like its two rivals, Antero Resources also has a very strong acreage position in the core sections of both the Marcellus and Utica Shale plays as the following slide shows. 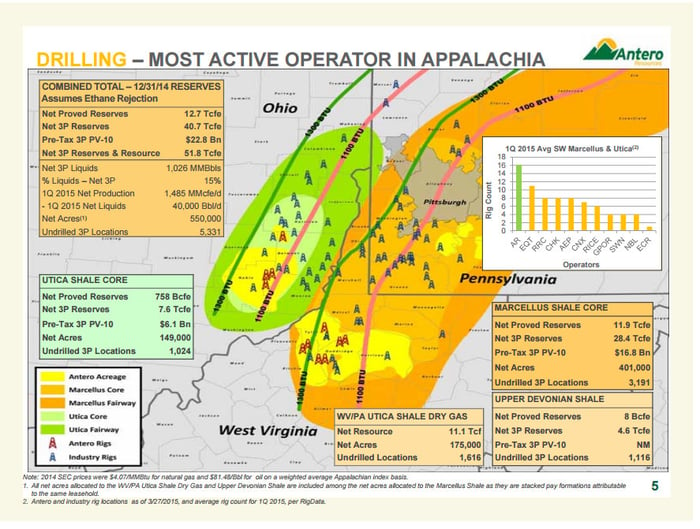 This strong position in the core of both the Marcellus and Utica shale plays is the key reason why Antero Resources has the largest proved reserves of the group. In fact, that position has driven 108% compound annual growth in the company's proved reserves since 2010. Further, Antero Resources is very likely to maintain its lead as it's currently operating the most drilling rigs of any natural gas producer in the region as it had 16 rigs running last quarter. That's twice the number of rigs Range Resources had operating and four times Southwestern Energy's rigs. By drilling more wells than its peers, Antero Resources will be able to book additional proved reserves this year as it completes these wells, which should prove that the gas is actually there and can be added to its reserves.

Investor takeaway
The best natural gas stocks by reserves have one thing in common: All three control prime real estate in the core spots of the Marcellus and Utica shale plays. Because of that they're able to control more gas per square mile than those operating on the periphery. It's what has driven tremendous growth in proved reserves for these companies over the past few years. Further, given the resource potential these companies, all three will likely continue to grow their proved reserves for years to come.