Blackstone's BAAM unit has some of the most lucrative business models of any of its asset management operations.

Blackstone Group (BX) is best known for private equity, but it's also No. 1 in allocating capital to hedge funds. Its Blackstone Alternative Asset Management operation (BAAM), also known as Hedge Fund Solutions, has quietly grown into one of its most important generators of management fees.

The BAAM model is relatively simple and is similar to other funds or fund management groups. For a fee, Blackstone allocates client capital to hedge funds. Doing this mean that Blackstone can win for itself and clients, using its clout to negotiate better terms for its investors or for specific strategies that are customized to match the needs of the capital it represents.

A fund or funds-style asset manager might not seem particularly attractive. Blackstone's management fee for its BAAM services sits on top of fees paid to the hedge funds its clients invest in. It seems like a tough sell given the multiple layers of fees when clients have every incentive to minimize what they pay their managers.

But the truth is, BAAM has been one of its best growth stories. With little more than $1 billion of capital in 2000 -- most of which was its own money -- BAAM now manages $65.5 billion. And it's only getting better.

The dollars and cents of BAAM
At face value, Blackstone earns very little in the way of fees for allocating investor capital to other people's funds. This year, its base management fees have come in at about 0.8% of client assets, consistent with its historical average. But when it wins for its investors, Blackstone collects again. BAAM earns sizable performance fees for exceeding investor expectations.

And exceed expectations it has. In addition to $261 million of base fees earned in the first two quarters of 2015, Blackstone booked another $99 million in performance fees. In its best year, 2013, a year in which the S&P 500 (SNPINDEX: ^GSPC) jumped by 32% including dividends, it booked $215 million in performance fees on top of $407 million of base management fees.

The top line isn't really what makes the business so attractive; it's what falls below it: BAAM's expenses are minimal. Base fees cover all of its expenses and then some. Performance fees are icing on the cake. 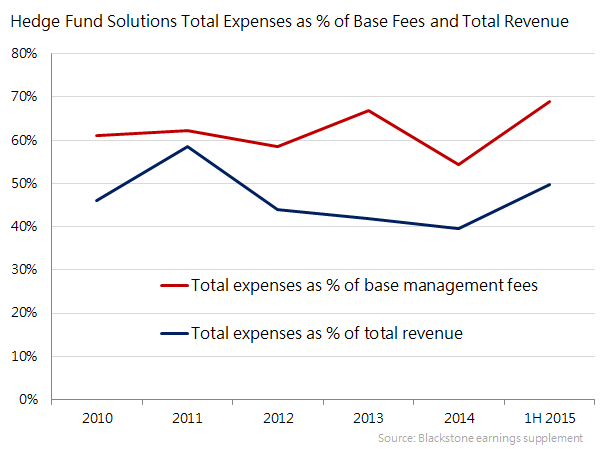 This business operates in sharp contrast to some of Blackstone's other segments. Private equity, for example, would be a money-losing division without performance fees. In the second quarter of 2015, the private equity unit generated roughly $101 million in base fees, compared to $67 million in base compensation in addition to operating expenses of roughly $62 million.

In the first half of 2015, Blackstone generated roughly 22% of its base management fee and advisory revenue from directing other people's money into other people's funds through its hedge fund unit. And provided the financial markets don't implode, it's probably reasonable to expect that it can continue to generate a steady stream of profits for Blackstone, with or without market outperformance.

If there were one unit Blackstone shareholders should love to see grow, BAAM is it. It's a consistent fee generator with lucrative economics, whether the market zigs or zags, making it a nice complement to its business lines that are much more cyclical in nature.