You may be much closer to enjoying this sunset from the beach in early retirement than you think.

Early retirement is for the uber-rich and lottery winners, right?

I wouldn't blame many people for thinking this. After all, the average American household has non-mortgage debt of $27,000 and a net worth of just $81,200. That's simply not enough to fund any type of retirement.

But there are two crucial problems with this thinking. First, there's nothing forcing you to be the "average" American. In fact, there are a lot of reasons you should try as hard as you can to avoid being an "average" American. We overspend, are in heaps of debt, have trouble saving for retirement, and are in poor health. If you want to break free from the mold, you can (more on that below)!

The second problem has to do with the idea of "early retirement" in the first place. Most people hear the words and assume this means that someone will be sitting on their butt, watching TV from now until the day they die. If that were the case, early retirement would be miserable.

How long until I get there?

One of the other mental hurdles to early retirement is the fact that it's impossible to nail down the exact date you'll reach your goal with any certainty.

But that alone shouldn't discourage you. While we certainly can't control for all of the variables -- changes in salary, a growing family, an unexpected promotion or job loss, to name a few -- we can get a ballpark idea for how long it will be until we can become our own bosses.

And here's the funny thing about it: Reaching early retirement has far more to do with how much you save than putting your money behind a smashingly successful investment. That's because for every 10-bagger stock, there are likely 20 more that went to zero.

And that's OK. Over the long run, stocks have returned an inflation-adjusted 6.9% -- including dividends. That's pretty darn good considering you can invest in a low-cost index fund to get the right kind of exposure for these results.

The key is living below your means -- ideally well below your means. If you can figure out what your level of "Enough" is and avoid upgrading your lifestyle every time you get a raise, you could find yourself saving up to 50% of your salary and investing it every year. The chart below shows that you would be financially independent in as few as 15 years if this were the case.

Accounting for different levels of post-inflation returns, here's how long until you reach early retirement based on how much of your salary you are able to save and assuming a relatively stable salary, spending, and a 4% withdrawal rate. 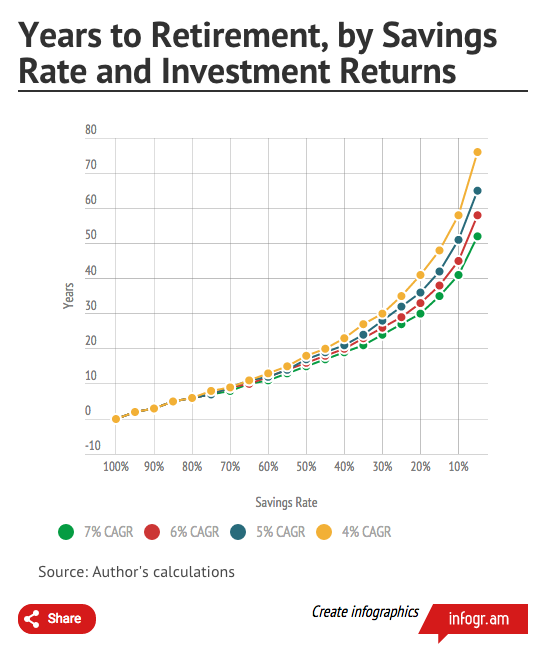 Of course, this doesn't take into account things like Medicare or Social Security, which can significantly reduce your savings needs. But this is about early retirement -- or "financial independence" -- which is a goal that many hope to accomplish as soon as possible, long before either program starts to kick in.

The next time you have to consider a purchase -- large or small -- remember this chart. Every dollar you save is doubly important: It can provide more money in retirement when invested, and it will keep your cost of living lower -- meaning you'll need less to reach your goals.

If you can live well below your means (and who couldn't cut a few things out of their lives?), your early retirement might be far closer than you think.