SolarCity (NASDAQ:SCTY) is one of the fastest-growing companies you'll find, but its stock is down almost 8% since last reporting earnings in May, and it's basically flat since reporting 2014 results in February: 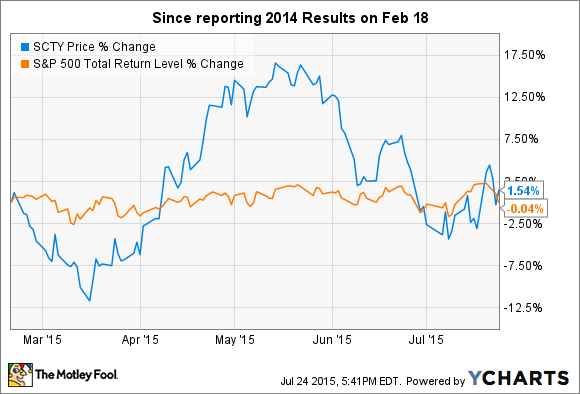 One of the things that's probably affected the company's stock price over that time is how complex it can be to understand the company. And that makes sense, because there really isn't another company out there that's built the same way, and that makes it more of a challenge to value. Factor in the up-and-down results in the company's commercial solar business that caused management to miss guidance recently, and it's understandable why the market has taken a step back.

However, just because it takes a little more effort for Joe (and Josephine) Investor to understand the company doesn't make it a poor investment. It's really just a matter of understanding the key parts of the company's business, and how they affect the company's ability -- both today and in years to come -- to make money.

With that in mind, let's look at the things that matter most when SolarCity reports, and put some context around it.

Like a high-growth utility
This is, so far, the best way I've been able to describe and understand the business. Think about it this way: SolarCity's business is essentially providing its customers with access to electricity that's cheaper than they can get from their utility. There's also the environmental benefit, reduced pollution, and sticking it to "the man," but essentially they replace, or at least offset, the cost of the electric utility.

The way the company does this is by installing and then agreeing to maintain a solar-panel system at the customer's home or business, and then using one of several different financial vehicles to facilitate the transaction:

Considering that even a small solar system will cost more than $15,000, few customers are willing to just write a check, so it should be no surprise that the next three options are the most popular. The thing is, for SolarCity to make money on these options, it has to buy the solar systems, pay its installers, run its operations and warehouses, and keep its own lights on. This takes a lot of money, and if you sign a 20-year PPA or a 30-year loan, it takes years for your monthly payments to cover the company's costs.

So the company has taken on a significant amount of debt in a relatively short period of time: 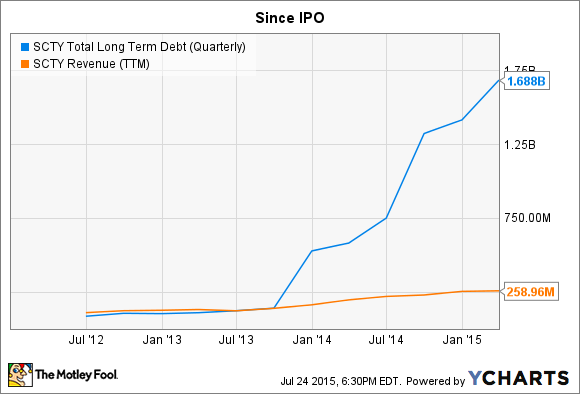 That can look pretty scary, I know. But let's put a little different context on it: So $1.7 billion in long-term debt has financed $6.1 billion in contracted payments. Don't get me wrong: Those payments aren't profits. The company still has to pay the bills and its employees, service the debt, and keep those systems running for the next couple of decades. But as long as it continues to keep costs in line with business demands -- which now means spending a lot to grow -- those contracts should generate reasonable returns.

Utilities also use a lot of debt, but what's different is most utilities aren't investing in growth, but simply improving and maintaining their infrastructure. The difference is that when a utility takes on debt, it almost always comes with higher rates to pay for it. SolarCity is taking on debt to fund incredible growth, as you can see from the growth in contracted payments.

But it's still much smaller than any utility you'll find. Only three years ago, it had about 29,000 customers. The company will probably add that many new customers in the second quarter. But even then it will only have around 250,000 customers, not much more than a small American city.

The growth is  key -- SolarCity's growing its customer base more than 10% every quarter. And that rate isn't likely to slow as the company expands. So far in 2015, the company has expanded into at least three new states.

Paying for growth
Here are the main types of debt SolarCity has:

Using things like asset-backed notes and its new solar bonds, the company can leverage its growing asset base to fund future growth, while eliminating the impact of dilution from convertible notes. Over time, let's hope these asset-backed debt instruments become more common.

Since the company is starting from a very small base (meaning small revenue) while growing at an enormous rate (meaning more capital requirements) cash-flow metrics aren't going to be all that pretty, and debt could grow faster than revenue for some time. Last quarter's interest expense was more than double the year-ago figure, and that could happen again next year.

Final thoughts
At least that's the basic premise, as I see it.

Yes -- there is risk because the company is taking on a lot of debt, its contracts are very long-term, and competition is growing. If the company doesn't continue managing its costs -- keep an eye on costs per watt installed -- then it could get rough. But the enormous cash value of its contract base, and the rate that base is growing ($1.1 billion in new contracted revenue last quarter) shouldn't be overlooked.

And all this is before we consider the potential benefit of the Silevo acquisition, for SolarCity to make its own panels, securing future supply and further reducing costs.

The nature of its business and how it's paying for it can make the company a little harder to follow, but management is playing a long-term game here. A lot of how it plays out will come down to execution and discipline on cost containment as well as growth, so be sure to keep an eye on the company's cost-per-watt numbers, as well as the growth in contracted billings, customers, and megawatts deployed.

That doesn't mean we won't get a let-down when we see earnings next, but it's a reminder that you should follow a lot more than just revenue and earnings numbers. Those don't really scratch the surface of what you need to know.