The offshore drilling industry continues to be mired in a very deep downturn as too many rigs are vying for the few available contracts that are dwindling as the price of crude remains weak. That said, Atwood Oceanics (NYSE:ATW) has managed through this storm better than most of its peers as it entered the downturn with a solid contract backlog and a strong balance sheet. This strength has enabled the company to defy the odds and report better than expected quarterly results so far this year. There's reason to be hopeful that the company's strong performance can continue when it reports its fiscal third-quarter results this Wednesday.

Last quarter, Atwood Oceanics absolutely crushed analysts' estimates. The company reported revenue of $350.4 million, which was about $10 million higher than analysts were expecting and well above the $273.1 million in revenue the company pulled in during its fiscal second quarter of last year. The company also trounced the consensus earnings estimate of analysts as it delivered $1.89 per share in earnings, which was $0.23 per share better than expectations. This was even after the company recorded a $0.08 per share loss as it wrote down the value of a rig its selling for scrap.

One of the reasons why analysts are expecting strong year-over-year growth is because of the company's robust contract backlog, which virtually locks in results. As the following slide notes, all of the company's currently available rigs were under contract last quarter. 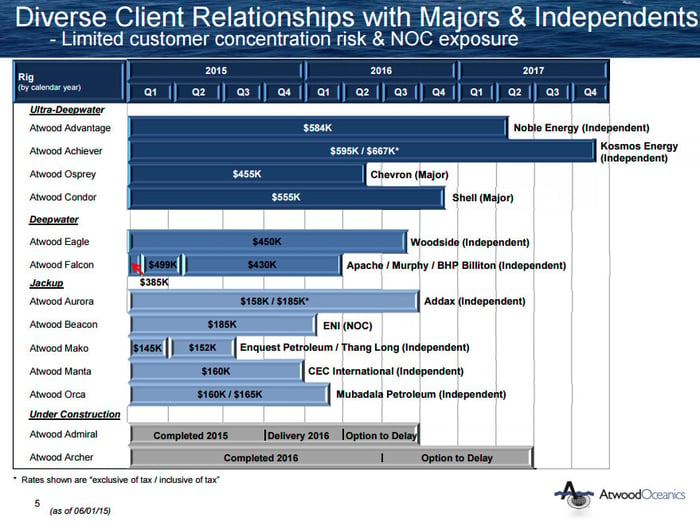 The big driver of the company's expected growth this quarter is its ultra-deepwater fleet thanks to the addition of the Atwood Achiever to its fleet last year. As the slide notes, the company was able to sign that vessel up to a lucrative long-term contract, which is paying big dividends for the company now that the market has weakened.

Keep an eye out for anything out of the ordinary
The other thing investors should keep an eye on when reviewing the report is for anything out of the ordinary. Atwood Oceanics' earnings press releases are typically very short on commentary. Over the last two quarters the only thing the company has noted in the release other than the headline numbers are writedowns it took during the quarter as a result of selling older rigs for their scrap value.

Because of that, investors should keep an eye out for any unexpected writedowns or charges the company took in the quarter. Two potential areas where the company might have had issues are its Atwood Osprey rig, which was damaged by a cyclone earlier this year, and the Atwood Mako, which was nearing the end of its contract. Any unanticipated costs associated with the Osprey's repair could impact the company's results. Further, the Mako's contract only covered 70 days and while the rig's current customer does have an option to extend its contract, it's very possible that it will decline the option and that the rig will be idled. Depending on timing, such an event could have had a negative impact on the company's results during the quarter.

Investor takeaway
Given that all of Atwood Oceanics' rigs were under contract during the quarter, there is an expectation that the company will defy the oil market downturn and report a solid quarter. That said, there are two rigs that had some uncertainties heading into the quarter, which might have had a negative impact on the company's results. Still, even if the quarter does come in a bit weaker than expected Atwood Oceanics remains well positioned to weather the current storm in the oil market as it continues to possess a solid backlog and a very strong balance sheet.