The more I think about it, the more I think Tesla Motors (NASDAQ:TSLA) and SolarCity (NASDAQ:SCTY.DL) make more sense as one company than they do as separate entities. If Elon Musk is serious about revolutionizing energy as we know it he should combine his two energy empires and make the integration needed to build an efficient platform for change in energy.

If Tesla Motors was intending to only be a car company a merger of the two wouldn't make sense, but its battery business needs some of the capabilities SolarCity has. Here's why Tesla Motors should buy its sister company SolarCity.

Making batteries a viable business
Musk thinks batteries could create a world where fossil fuels aren't necessary and we can store the sun's energy for use 24 hours a day. That's very possible in the future, but if Tesla Motors is going to be in that business it'll want to do more than sell batteries.

Batteries, even Tesla Motors' batteries, are a commodity and historically they've been very low margin for large suppliers. After all, do you know who made the lithium-ion battery in your phone? Probably not, because it doesn't matter.

There are also dozens of large companies getting into the energy storage business and lots that make batteries that are very similar to Tesla's. Below is an image from GTM Research that shows some of the major players in the upstream value chain of energy storage. You can see that Tesla Motors isn't alone. 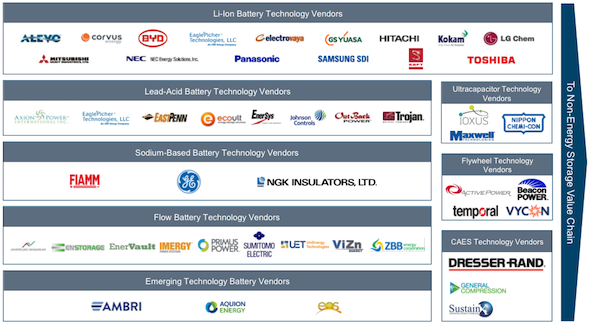 Where Tesla will want to move is into downstream services. This would be helping utilities, commercial buildings, and homeowners when to store energy and when to discharge it for maximum revenue. That's where SolarCity comes in.

SolarCity has tens of thousands of customers and has data around when they use energy and when solar energy is produced on rooftops. They could help create the value from a Powerwall or Power Pack, which they do in homes buying Powerwalls today because they control the inverter that charges the system.

If you could be the company that provides the battery and the intelligent background intelligence system, which knows how to monetize that battery efficiently you could create a valuable company. Tesla Motors could build that capability on its own, but it would be better off buying millions of data points and hundreds of thousands of customers from a natural partner in SolarCity.

The Powerwall will only be as valuable as the capabilities it provides. Image: Tesla Motors.

More powerful as one
A combination with Tesla Motors could be good for SolarCity as well. Today, it's selling solar energy to homeowners primarily through power purchase agreements that rely on net metering. But net metering is being challenged around the country and installers -- including SolarCity -- are moving to loan financing, which will be lower margin than leases or power purchase agreements.

To combat this, SolarCity could provide a full energy solution, including solar, energy storage, demand response, peak shaving, and a number of other cost saving or revenue generating options. This could be done for both residential and commercial customers. But it would help to have the brand of Tesla behind it and the differentiation of being the one to provide a full solution for its customers.

Alternative energy powers collide
As the renewable energy business grows and Musk's vision gets larger Tesla Motors and SolarCity are starting to converge on common ground with energy storage. They bring different strengths and weaknesses to the market and I think that they're both better off together.

If combined, they could be a behemoth in renewable energy, offering a full suite of energy solutions to customers large and small. That would help fulfill Musk's vision of changing energy as we know it and it's a natural move for both companies.