A wise man once said, "Life moves pretty fast. If you don't stop and look around once in a while, you could miss it." Okay, I'll admit it's debatable just how "wise" Ferris Bueller is, but in this case, I think he's right on the money.

Those who haven't stopped to look around in a while have probably missed the rapid changes sweeping through the energy sector. The solar and wind industries are rapidly growing, and with it are an increasing number of options from which investors can choose. Among these, high-yielding Pattern Energy Group (NASDAQ:PEGI) offers investors an interesting way to benefit from the maturing wind industry.

More than a gentle breeze
Owning and operating 16 wind power projects in the United States, Canada, and Chile, Pattern Energy is an independent power company that sells the generated power to local utilities for distribution to consumers. Its portfolio has an impressive total capacity of more than 2.1 GW, while its pipeline consists of almost 6 GW worth of projects.

Eager to enter new markets, the company recently announced it has added five projects in Japan to its list of Right of First Offer, or ROFO, projects -- anticipated ownership of the three wind projects totals 106 MW, while the two solar projects total 22 MW.

A mighty wind
The company only closed its IPO in October 2013. Granted, it isn't one of the most well-known names in the energy sector, but don't let the company's lack of name recognition (small-f) fool you. It weighs in at a market cap of about $1.98 billion. More interesting to investors, though, is probably its dividend, which has a current yield of 4.70%. 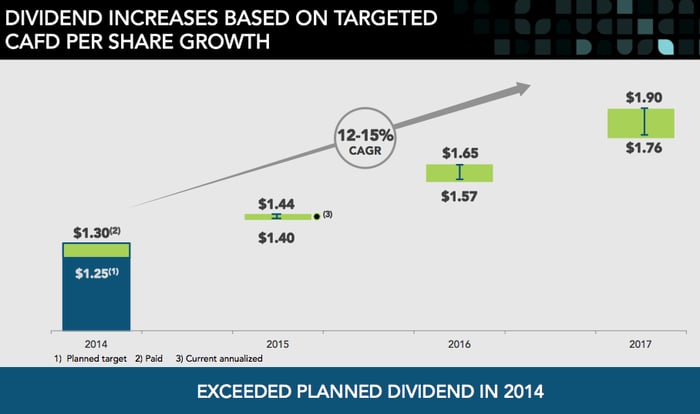 This may be a compelling enough reason for investors to consider picking up shares. Management seems to be committed to growing the dividend in a responsible manner -- the development of an extensive pipeline. According to Michael Lyon, Chief Financial Officer, the company will decide how to best finance development of the pipeline based on market conditions, but it's willing to consider corporate debt, preferred equity, or common equity. Furthermore, the looming question is: "How sustainable is the dividend?" Even though the company has only been public for a little less than two years, the financials look promising, and it has high hopes of growing its cash available for distribution, or CAFD. Investors may take the CAFD estimate for 2015 with a grain of salt, for management doesn't offer revenue or EBITDA estimates. Instead, it bases the CAFD estimate on the June 1, 2015 run-rate.

Where are the risks?
In a fairly new industry, like wind, it may be more challenging to identify risks which the company faces. However, they surely exist. For one, Pattern Energy relies heavily on entering into long-term power purchase agreements, or PPAs, with off-takers, who purchase the wind-generated electricity. Should the company acquire a facility but fail to secure a PPA, it would be devastating. Equally deleterious to the company's operations would be if the off-taker defaulted on the PPA. In this context, the company believes that it is in an advantageous position: 92% of its assets are contracted, on average for 16 years, with off-takers who sport an "A" weighted credit rating.

Acquiring and developing wind power facilities is by no means. an inexpensive endeavor. Therefore, in order for a company like Pattern Energy to succeed -- to maintain and raise its dividend in a sustainable way -- it must be able to effectively manage its debt. Using net debt to EBITDA to assess the company's debt leverage, one finds that it sports an attractive ratio of 3.1 -- well within a safe range. By comparison, MLPs, which operate similarly to a yieldco like Pattern Energy, must have a ratio of between 4.0-4.5 to be considered investment grade. Thus, it appears that the company is in good shape as it continues to take on debt, acquiring and developing wind power projects.

The company is keen on discussing its extensive pipeline of projects. Spanning three continents, this is comprised of 2,130 MW in the U.S., 1,070 MW in Canada, 759 MW in Mexico, 50 MW in Chile, and 999 MW in Japan. Regarding the U.S., a lot of focus revolves around the renewal of the production tax credit, or PTC, and investment tax credit, or ITC, and their ability to spur development of new projects. According to the American Wind Energy Association, when the tax credits briefly expired in 2013, new wind farm installations fell by 92 percent. Several days ago, in what is being considered a victory for the wind industry, the U.S. Senate Finance Committee voted overwhelmingly to extend the tax credits through 2016. Japan also provides a promising growth opportunity for the wind industry. Following the Fukushima disaster, renewable power sources have received more serious considerations. The Japanese government recently unveiled its target of 10 GW of wind capacity by 2030.

A Fool's final thoughts
A significant presence in the wind industry, Pattern Energy is a company, which deserves serious consideration. As convinced now as I was at the end of 2013 when I made an "outperform" CAPS call on the company, I believe Pattern Energy offers a most compelling argument for investment. For some, though, the case may not be as convincing. Nonetheless, if you find your interest piqued, this should just be the beginning of your research.