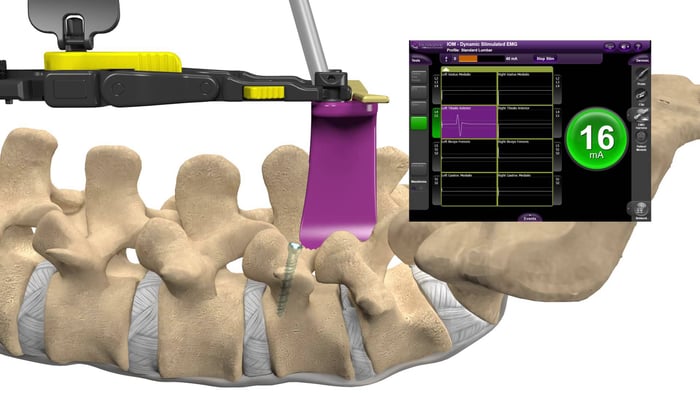 The ongoing development of new treatments in the healthcare field has improved the lives of millions, and it has opened up new business opportunities for cutting-edge companies with the skill to discover them. NuVasive (NASDAQ:NUVA) has had great success with its technology to make spinal surgery simpler, using minimally invasive techniques to minimize complications and speed up recovery times. Coming into its second-quarter financial report on Tuesday afternoon, NuVasive shareholders were increasingly optimistic about the company's results, sending the stock back up to its best levels since before the financial crisis, and the equipment-maker delivered solid performance along with some good news about an ongoing dispute. Let's look more closely at NuVasive and why investors are celebrating its latest results.

NuVasive keeps growing
NuVasive's second-quarter results continued its trend of healthy growth. Sales climbed 6.4% to $202.9 million, beating top-line expectations by more than $2 million. The company reversed a year-ago loss on a GAAAP earnings basis. Adjusted net income more than doubled from year-ago levels to $15.7 million, and that produced adjusted earnings per share of $0.31, more than a nickel per share better than expected.

Looking more closely at the results, NuVasive once again managed to overcome currency-related difficulties. Without the strong dollar, revenue growth would have been more than two percentage points higher during the quarter.

At the same time, though, cost containment clearly played a role in NuVasive's earnings success, with overhead costs actually declining despite the higher sales and spending on research and development falling by more than 12%. The resulting impact on profit margins was clearly evident, with gains of more than 4.5 percentage points reflecting the company's efficiency-producing efforts quite well.

CEO Greg Lucier was happy with NuVasive's results, noting how "we continued to take market share and gain momentum in our efforts to improve operational efficiencies." In addition, Lucier said that NuVasive remains "laser-focused on increasing our market share by rapidly developing disruptive technologies and services for spine surgery, expanding our global footprint in existing and new markets, and positioning NuVasive as a commercial powerhouse with integrated sales, service, and specialized customer marketing programs."

Can NuVasive keep up its pace?
NuVasive's also boosted some of its guidance for 2015. It kept its sales estimate of $810 million untouched, but noted that currency impacts would likely play a slightly bigger role in holding top-line growth back. More importantly, NuVasive now expects adjusted earnings of $1.17 per share, up from last quarter's guidance of $1.10 and reflecting in part the better-than-expected results the company produced during the second quarter. NuVasive also thinks that higher margins and lower tax rates will provide further benefits to its earnings.

Even more good news came in a separate release this afternoon, as NuVasive said that it had come to a definitive settlement with the U.S. Department of Justice. In an effort to settle investigations related to alleged false or improper claims submitted to the Medicare and Medicaid programs, NuVasive followed through on its agreement in principle announced in April. Under the terms of the final agreement, NuVasive will pay $13.5 million plus fees and accrued interest. The amount is slightly less than expected, but the real key is that the uncertainty that the investigation represented will now disappear for NuVasive going forward.

NuVasive investors were quite pleased with the company's combination of positive results and the final settlement news, as the stock climbed by more than 4% during after-hours trading in the session following the announcement. With the DOJ investigation behind it, NuVasive can now turn its full attention back toward coming up with new ground-breaking technology in the healthcare field that can help even more patients. Given the tailwinds that medical-device makers have from favorable demographics, NuVasive has a good chance of continuing to grow well into the future.