Turnaround stories, rags-to-riches sagas, and bottle rockets straight out of left field -- these five stocks have shocked our panelists in 2015. 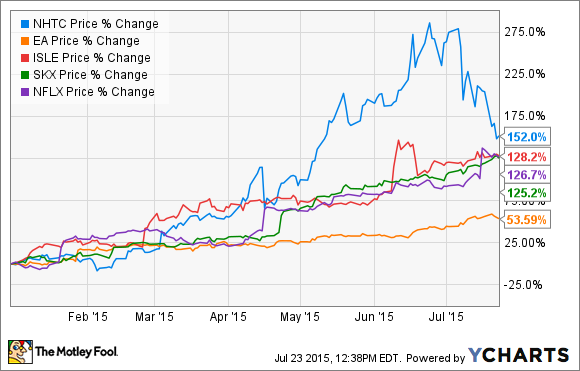 But there are always exceptions to the rule. We asked a panel of Motley Fool contributors to outline the five biggest surprises they've seen in 2015, and this is what they came up with.

Here, you'll find a few long-running turnaround stories such as video-game designer Electronic Arts (EA 0.17%) and casino operator Isle of Capri Casinos (NASDAQ: ISLE). Digital entertainment veteran Netflix (NFLX -0.08%), meanwhile, is going from strength to strength, and former bargain-bin shoe designer Skechers USA (SKX -0.03%) has become a powerhouse footwear brand in its own right. And what the heck is Natural Health Trends (NHTC -5.36%), other than a market-crushing titan in 2015? You'll soon find out.

These stocks have gained between 54% and 152% so far this year -- and that includes retreats from much loftier yearly highs in some cases. Dig into these juicy stock stories right here:

Brian Stoffel (Netflix): Let's consider where Netflix stood when it entered 2015. Although the company's stock had fallen 25% in the last three months of 2014, it still traded for a hefty valuation.

Shares were valued at 90 times trailing earnings, and Netflix hadn't produced positive free cash flow during the year. The company had just announced ambitious plans to expand to nearly every country on the map, and warned that it would take a while before its investments truly paid off.

Since then, the stock has more than doubled -- up an amazing 125% in just seven months' time. While it's still a mighty expensive holding -- now over 300 times trailing earnings -- the company's success at growing its subscriber base truly stands out.

Total global streaming subscriptions rose a whopping 30% to 65.5 million from the second quarter of 2014 to the same time frame this year. The biggest gains came outside the U.S. One year ago, there were 13.8 million international subscribers to Netflix services. That number has jumped almost 70% since then to 23.25 million. That kind of growth shows just how popular Netflix is with an international audience, and why the stock has done so well over such a short time frame.

Rich Duprey (Isle of Capri Casinos): For a casino operator that once seemed to be on its deathbed as the island gambling oasis of Macau off mainland China attracted betting and investment dollars, Isle of Capri Casinos has to be one of the most surprising turnaround stories -- not only of this year, but of the past few years.

The casino operator's recovery began last year, but has accelerated in earnest in 2015, with shares more than doubling since the start of the year.

Isle of Capri Casinos owns or operates 15 casinos in seven states, and strong performance has fueled its drive higher, with revenue and earnings topping analyst expectations. A continuously improving economy and more disposable cash in consumers' pockets have been big factors in helping the casino operator outpace even its thriving industry.

Unlike other bigger, more well-known players, Isle of Capri Casinos doesn't have exposure to Macau. Thus, when revenue there started to plummet last year after a crackdown on corruption, the U.S.-based operator, whose properties are mostly in secondary markets, was unfazed. This has helped its stock perform far better than its gaming peers.

There also doesn't appear to be any danger of the casino rolling snake eyes anytime soon, which makes Isle of Capri Casinos my most surprising stock of 2015.

More to the point -- did you know that Natural Health Trends existed before clicking on this article?

Natural Health Trends is a multi-level marketing firm, relying on a network of customers-slash-contractors to sell the company's products. You could think of the company as the Tupperware of beauty products and nutritional supplements. If you've run across brands such as Valura, Skindulgence, Premium Noni Juice, or ReStor Vital, you've seen Natural Health Trends in action. You just didn't necessarily know it at the time.

So why is this no-name business storming up the charts in 2015?

Well, Natural Health Trends is enjoying a golden age in international markets. Specifically, sales in Hong Kong accounted for 92% of the company's revenue in the recently reported first quarter, on the back of an 80% year-over-year sales increase. Hong Kong is the company's gateway into China -- a local shipping center for customers and marketing partners in the Chinese mainland.

With China playing such a crucial role in Natural Health Trends' business results via that Hong Kong link, the company itself is pretty much a proxy for that particular Far Eastern market. Overall, first-quarter sales increased 76%, and net income more than doubled.

That being said, Natural Health Trends remains a micro-cap stock with a market cap of just over $300 million. In spite of the massive gains in the stock's rearview mirror, the share price has actually fallen about 45% from its 52-week high, with half of that decline coming in the past week and a half.

The Chinese consumer market isn't looking terribly healthy at the moment, and in America, networks of so-called independent contractors may soon be reclassified as taxable and benefits-laden employees.

Natural Health Trends is a risky stock with absolutely zero analyst coverage. I mean, the company issued a celebratory press release when it was selected for inclusion in the Russell 3000 and Russell Microcap indices, which is a far cry from joining the Dow or the S&P 500.

Long story short: If you're looking for stability and future promise, Natural Health Trends may not be for you. But the stock is hard to beat when it comes to momentum-driven rocket tickers at the moment.

That counts as a major surprise in my book.

Dan Caplinger (Electronic Arts): It wasn't so long ago that many had declared the era of traditional video games dead, with the potential competition from mobile devices and other newer options threatening the viability of console-based video gaming. Yet Electronic Arts has defied calls for its early demise, with the stock vaulting higher by 57% so far in 2015 after roughly doubling in 2014.

Electronic Arts' renaissance came largely thanks to new hardware from the major game-console makers, which gave EA a chance to showcase its game-making capabilities. With core franchises including Battlefield, Dragon Age, and sports must-haves like the Madden series of football video games, Electronic Arts has attracted gamers of all ages.

At the same time, EA has addressed some of the quality concerns that its customers had, with new games like Titanfall getting critical acclaim. EA's subscription service has also had early success. It offers gamers a chance to try older titles that they otherwise wouldn't buy, but at a price they're willing to pay, generating recurring revenue for the company.

Given how far it climbed in 2014, EA didn't have many investors thinking 2015 would be equally impressive. For now, though, Electronic Arts is executing flawlessly, and that bodes well for its future prospects.

Tamara Walsh (Skechers): In the past, when you wanted to buy a pair of knock-off sneakers, Skechers was your one-stop shop. Today, however, the retailer has evolved from a cheap purveyor of off-brand footwear into the number two brand share position in the U.S. athletic footwear market. As if that isn't surprising enough, the stock has gained an eye-popping 124% so far in 2015. Shares are now trading at an all-time high around $124 per share.

Skechers shocked Wall Street earlier this year after delivering blowout first-quarter results in which sales climbed a record 40% to $768 million. Earnings for the period also topped expectations, coming in at $1.10 per share. The strong fiscal 2015 first-quarter results came on the heels of an annual sales record of $2.4 billion in 2014.

It seems Skechers has a winning formula. The company isn't shy about using celebrity endorsements to move its products, including deals with world famous drummer Ringo Starr, recording artist Demi Lovato, and legendary quarterbacks Joe Montana and Joe Namath, to name a few. With the stock now trading near an all-time high, investors may want to remain on the sidelines for now. Nonetheless, it will be interesting to see if Skechers continues to surprise us in the quarters ahead.

Both Anders Bylund and Tamara Rutter own shares of Netflix. Dan Caplinger, Brian Stoffel, and Rich Duprey all have no positions in any stocks mentioned.

The Motley Fool recommends and owns shares of Netflix. Try any of our Foolish newsletter services free for 30 days.