Wall Street can really be an enigma sometimes. It's a place where a company like National Oilwell Varco (NYSE:NOV) can beat all the expectations that the market had for its quarterly earnings and yet it still can't seem to reverse the malaise that has struck the company's shares so far this year. 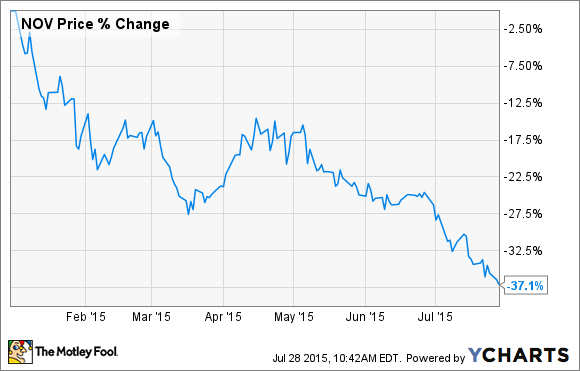 Perhaps the numbers from National Oilwell Varco's most recent quarterly release isn't enough to stop the bleeding. When you combine those results with what looks like the seeds of a turnaround, though, this sell-off looks really overdone. Let's take a look at National Oilwell Varco's quarterly results, along with three signs that suggest brighter times are ahead and that Wall Street is looking at this company the wrong way.

A lot of the results this quarter came in slightly better than expectations. While top- and bottom-line numbers came in down -- both sequentially and year over year -- it beat Wall Street expectations. According to consensus estimates compiled by S&P Capital IQ, National Oilwell Varco beat both revenue and EBITDA expectations by $53 million and beat earnings per share estimates by $0.13.

The largest reason the company was able to post better-than-expected results was its cost-cutting efforts. National Oilwell Varco CEO Clay Williams noted that as work has slowed for the company, it has been able to take a lot of previously outsourced manufacturing and move it back in-house. This allows the company to significantly reduce its operational costs without reducing headcount and taking the restructuring charges associated with layoffs.

The biggest place where we can see these results is in the company's rig systems segment. 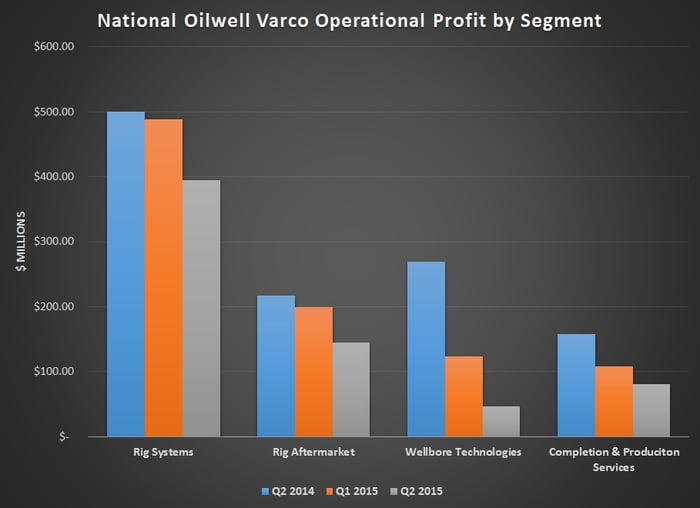 The numbers in this chart show that rig systems' operational profit did see some sequential declines, but the telltale sign that its cost-savings efforts are working is in operational margins. Despite the declining revenue, margins for this segment actually improved from last quarter's 19.3% to 20.5%. This is one of the most encouraging signs that the company is able to handle the downturn in the market.

Signs of a turnaround coming
Based on current oil prices and recent announcements from big oil producers that they are looking to scale back capital expenditures even further, it wouldn't seem that the outlook for National Oilwell Varco -- or any other oil services company -- is positive. But there are three less talked about signals that suggest the decline in National Oilwell Varco's stock may be slightly overdone.

The first one that management mentioned in the quarterly earnings conference call is the increasing amount of rig cannibalization going on in the land rig segment. Cannibalization is when a rig owner takes the parts off an idle rig to replace a spent or broken part off a rig in use. Rig owners will do this when times are lean and there are several rigs without work, but it is a patchwork effort that only delays the purchase of new equipment. So, when the market does pick back up, that particular rig owner will need to buy replacement parts for its rig on the job as well as for its idled rigs before they can be put back into use.

Second, management noted that even though the rig count in the U.S. has declined from lack of use, the demand for new land rigs actually remains relatively strong. The reason that land rig demand has remained rather strong is because oil producers are insisting on high-grade rigs known as AC top drives. These are the ones that have the horsepower to drill the long laterals needed for hydraulic fracturing and are able to move on a drilling pad without being taken down and reassembled. As this slide from rig owner Helmerich & Payne shows, the total amount of rigs that have these capabilities are still only 54% of the total rigs available in the U.S. This is important because more than 70% of the domestic wells today have a long lateral component to them and are mostly drilled on a multiple well pad. This makes many of those mechanical and SCR rigs much less attractive to use. What this means is that land rig manufacturers -- National Oilwell Varco included -- will likely see orders for these AC rigs remain strong for some time.

Finally, another aspect of the oil and gas equipment market that bodes well for National Oilwell Varco in the future is the increasing presence of rigs in service that have NOV installed equipment. Today, there are more than 50 floating offshore rigs under construction and most of them have a very high percentage of NOV manufactured equipment on them. Compare that to the 50 oldest rigs on the water today that have a much lower percentage of NOV equipment. As these new rigs take on contracts and the older rigs hit the scrapyards, National Oilwell Varco will have a huge market share in offshore rig equipment, which will likely lead to big upticks in revenue and operational income for its rig aftermarket segments, which just happens to be its highest margin segment.

What a Fool believes
I can't say with any sort of certainty if this is the bottom for shares of National Oilwell Varco. The opinion of Wall Street can sometimes vastly outweigh the business reality of a company. More and more, this appears to be the case with National Oilwell Varco. As long as the company continues to post results like these in what should be a down market, and if some of these turnaround signals start to bear fruit, then perhaps it's the ones on Wall Street who will be regretting they sold their stake in this company.