2015 is off to a slow start for Intel's Internet of Things group, but growth might reaccelerate in the second half.

Chip maker Intel ( INTC 3.10% ) is trying to find new avenues of growth as the market for personal computers declines. One market that Intel executives routinely cite as a growth vector for the company is its "Internet of Things" business.

At Intel's 2014 investor meeting, company CFO Stacy Smith said that the Internet of Things business was expected to see an "uptick" in growth from the kind of growth rates seen in 2014. Given that the division grew by about 18% last year, it wouldn't have been unreasonable to expect at least 19% growth during 2015.

That said, reality has been very different for this division than what Intel had forecast in late 2014.

First half of 2015 growth substantially below target

In the first quarter of the year, Intel's Internet of Things group delivered 11% year-over-year growth. In itself, that number wasn't "bad," but it was a full 8% below Intel's full-year growth guidance for the division.

OK, maybe the Internet of Things group simply got off to a rough start in the first quarter and things would pick up from there? Unfortunately not. In the second quarter, this division saw year-over-year revenue growth slow to just 4%.

Will Intel actually hit this target?
Although Intel has put out total revenue guidance for the full year, it hasn't given out specific per-segment breakdowns. This makes it tough to figure out whether Intel's guidance assumes a significant reacceleration in its Internet of Things group in the second half of the year or not.

But I do think it's helpful to look at the year-over-year growth trends that Intel saw in 2014 to see if the growth is consistent among the four quarters or if the growth tends to be "lumpy." 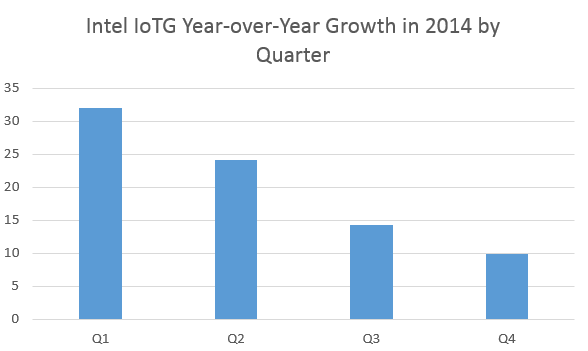 Interestingly enough, it's clear that the growth that Intel saw in this segment was by no means consistent across the four quarters: in the first quarter growth was over 30% and by the fourth quarter growth had come down to just under 10%.

The wide variance in growth rates across the four quarters suggests that investors shouldn't rule out the possibility of a large reacceleration during the second half of the year. That being said, Intel didn't offer any additional color on the "shape" of the company's Internet of Things business for the year on the most recent earnings call, so such a reacceleration is far from guaranteed.

Traditionally, Intel's Internet of Things group has essentially used the same silicon that the company develops for other markets (such as the PC and the data center), which has given the division tremendous operating leverage.

But Intel has signaled that it is interested in developing more specialized Internet of Things silicon to go after a broader range of markets. In the near term this will pressure profitability, but in the long term it should allow Intel to widen its served addressable market and, if Intel is successful, drive additional revenue and profit growth.