What: Shares of American steelmaker AK Steel Holding Corporation (NYSE:AKS) have shot up 29.5% since July 28, a remarkable gain for any stock, much less that of a beleaguered steel producer: 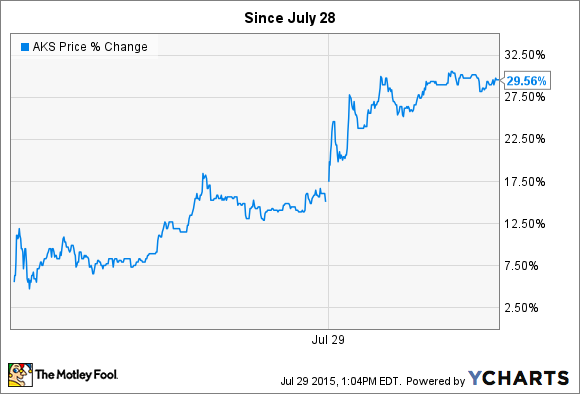 So what: There are two things (maybe three) behind this massive gain over the past two days. To start, AK Steel Holding reported earnings on the 28th, with its $0.36-per-share loss slightly better than estimates it would lose $0.37 per share in the quarter. Second, a group of the major American steel producers, including AK Steel, U.S. Steel, Nucor, Steel Dynamics, and the U.S. division of major international steel and ironmaker ArcelorMittal filed a petition with the federal government on the 28th, requesting a big increase in tariffs on imported steel.

This second piece is the bigger driver, as American steelmakers have been complaining for more than a year that illegal "dumping" (which is essentially selling below cost) by foreign steelmakers is killing the market. The petition specifically called out state-funded subsidies of the steel industries in Brazil, Russia, China, India, and South Korea as being illegal. The U.S. government has already levied some tariffs on steel imports over the past year, but in that time imports have actually gained market share in several key product categories largely by pushing prices down, further evidence of the possibility that the steel industry in some of these countries is getting financial support from their governments.

Lastly, AK Steel is heavily shorted, as is U.S. Steel: 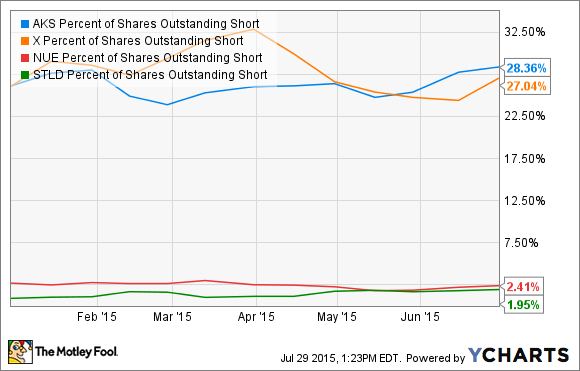 There's a high likelihood that yesterday's earnings beat and the potential of increased tariffs against imports have combined to create a "short squeeze," as short-sellers are forced to buy shares to exit their short positions. All this buying action is pushing up prices.

Now what: AK Steel did report modest improvements in its business, but they aren't turnaround-worthy, to be honest. If the American industry can get the federal government to take a hard-line position and impose tariffs to fix the competitive balance, that would be a huge win, but at this point it's too early to tell what will happen. Factor in the likelihood that more short-sellers look at the big gains in recent days as an opportunity to again short its stock, and there's a lot of downside risk from here if tariffs don't get implemented.

The bottom line is that both AK Steel and U.S. Steel's vertically integrated steelmaking business models are very difficult to scale down, and major swings in demand lead to "boom and bust" cycles where the losses pile up.

If you're looking for a winner in the steel business -- whether tariffs get put in place or not -- Nucor and Steel Dynamics are much better bets. Their businesses are built to better withstand both the strong and weak sides of the steel demand cycle, and to better withstand the risks associated with imports.