Facebook (META -2.03%) reported earnings for the second quarter of 2015 on Wednesday after official market hours. Both sales and earnings came in ahead of expectations, and the company is doing a great job at growing its user base and making more money per user. Expenses are also growing rapidly, but that's no big reason for concern for investors in Facebook stock.

Solid sales and earnings
Total revenue during the second quarter of 2015 came in at $4.04 billion, a 39% year-over-year increase, and better than the $3.99 billion average Wall Street analyst forecast. Excluding the impact from unfavorable currency fluctuations, revenue growth was a strong 50%.

Most of Facebook's growth came from advertising, as revenue from this key segment grew by 43% year over year, more than compensating for the 8% decline in payments and other fees. Advertising revenue jumped 55% on a constant currency basis. 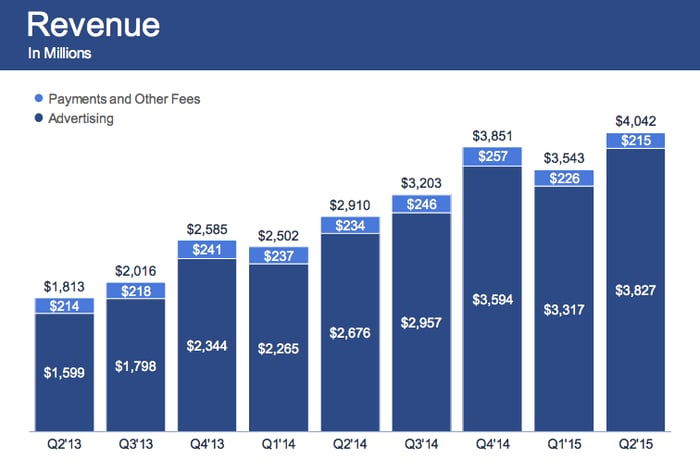 Facebook is investing tons of money on different growth initiatives, which is hurting profit margins. R&D expenditures accounted for 29% of revenue during the last quarter, up from 17% in the same period last year. Also, marketing and sales expenditures increased from 12% of sales in the second quarter of 2014 to 15% of revenue in the latest earnings report. This trend is putting downside pressure on profit margins, so operating profit margin declined from 48% to 31% of revenue.

Management had previously warned investors about rising expenditures, so increasing costs were broadly incorporated into analysts' projections for the quarter. Adjusted diluted earnings per share came in at $0.50, better than the $0.47-per-share average forecast.

Facebook is gaining more friends
Facebook keeps adding more users to the platform, and at a considerable speed. The company ended the second quarter with 1.49 billion average monthly users, a 13% increase versus the same period last year. Mobile monthly active users stand at 1.31 billion as of June 30, 2015, an 23% year-over-year increase.

Daily active users are outgrowing monthly ones, and this is a major positive when it comes to evaluating the key engagement trends. Daily users were 968 million on average during the last quarter, a 17% annual increase. Mobile platforms are a key growth driver when it comes to daily users, too, as daily average mobile users jumped 29% to 844 million. 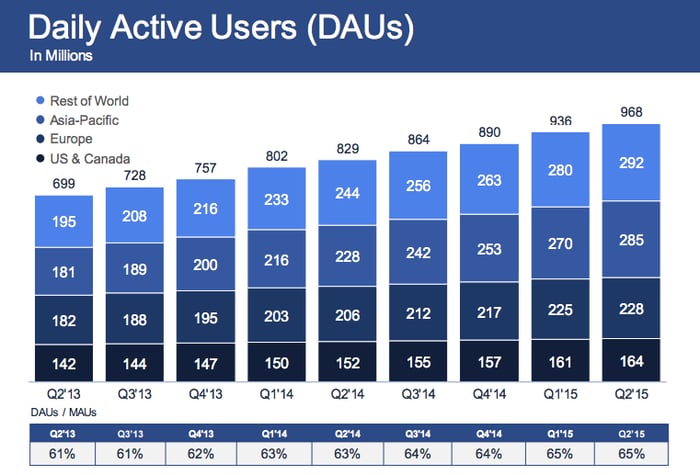 Not only is Facebook delivering solid user growth, but the company is also making more money per user. Average revenue per user was $2.76 on a global basis during the second quarter, up from $2.24 per user in the same period last year.

It's important to note that Facebook makes far more money from its users in the U.S. and Canada than in other regions, and this situation signals that the company still has a lot of room to increase monetization by reducing the gap in the future.

Andrés Cardenal has no position in any stocks mentioned. The Motley Fool recommends Facebook. The Motley Fool owns shares of Facebook. Try any of our Foolish newsletter services free for 30 days. We Fools may not all hold the same opinions, but we all believe that considering a diverse range of insights makes us better investors. The Motley Fool has a disclosure policy.