Please ensure Javascript is enabled for purposes of website accessibility
Log In Help Join The Motley Fool
Free Article Join Over 1 Million Premium Members And Get More In-Depth Stock Guidance and Research
By Jason Hall - Jul 29, 2015 at 11:57AM

A surprise earnings beat and some stabilization in its frac sand business are pushing up the stock. But there's more to the story, and one unsustainable benefit that's behind the positive earnings news. Read on for more.

What: Shares of frac and industrial silica sand producer U.S. Silica Holdings, (SLCA 3.47%) jumped as much as 17% in early trading before settling in at the current 10% gain, following the release (yesterday after market close) of second quarter's earnings. In short, the company beat analyst estimates, and management says it sees some stabilization in its core business.

So far the stock is slightly down in 2015, having given up big gains this spring in the past few months. Since last fall, shares have fallen two-thirds, even with today's gain: 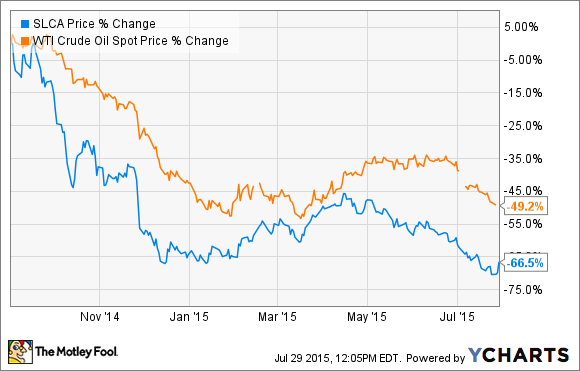 So what: As you see in the table above, falling oil prices have really hurt demand for the company's largest product, frac sand used in oil and natural gas wells. But yesterday's second quarter earnings report, which beat profit estimates, and some positive comments from management are driving the stock higher today.

Since last year, total sales are down 28%, but the frac sand business is down nearly 40%. But that only tells part of the story. Total volume shipped is down about 15%, meaning prices have fallen significantly with more competition for a smaller current market.

The good news is management sees some stabilization, and as much as business has declined, U.S. Silica has increased its market share. The company also reported solid results in its Industrial and Specialty Products business, where higher prices offset modest declines in volume shipped.

Lastly, the company announced that its effective tax rate for the year would be 0% instead of 25% because of prior period losses, which is responsible for $0.12 of the $0.18 per share earnings the company reported.

U.S. Silica also declared the same $0.125 per share quarterly dividend it has been paying since 2013.

Now what: Management says it's seeing the frac sand business stabilize, and the tax benefit that has it essentially paying no income tax this year are improving the bottom line and the outlook, but it's important to note that the company still won't give any guidance. In other words, uncertainty remains, and that means the stock is likely to be pretty volatile for some time to come.

But if indeed the worst is over, this could be a good time to add shares or start a position. But the company's primary business of supplying frac sand is likely to remain very competitive, and demand relatively weak for some time to come. From a valuation basis the shares probably look less expensive than they really are, as the tax benefit isn't a sustainable way to maintain profits, and sand prices could fall further if demand remains as weak as it has, further squeezing margins.

In other words, it's probably too soon to call this a turnaround just yet, and there are real challenges that remain, but there's a good chance that long-term demand returns. The company has a pretty solid balance sheet, with more than enough cash on hand to ride out a few rough quarters, but until the picture clears with regards to onshore oil and gas production, I'm not convinced it's time to buy.

Jason Hall has no position in any stocks mentioned. The Motley Fool recommends U.S. Silica Holdings. Try any of our Foolish newsletter services free for 30 days. We Fools may not all hold the same opinions, but we all believe that considering a diverse range of insights makes us better investors. The Motley Fool has a disclosure policy.