On an "organic" basis, which excludes the effects of exchange-rate shifts and acquisitions, net sales for the year were flat. But Diageo's guidance for the next few years is upbeat.

Another tough year, but things may be looking up
Diageo has had an increasingly tough time in North America, its largest and most profitable regional unit. Consumer tastes in the U.S. have shifted toward smaller "craft" producers -- and away from longtime core Diageo brands like Smirnoff vodka, Captain Morgan rum, and Johnnie Walker whisky.

That trend continued in the latest fiscal year. Diageo's organic sales in North America fell 1%, with sales volumes down 3%. But despite the rough ride for its mass-market brands, the company is managing to capture some of the shift: Net sales of its Bulleit whiskies rose 36% in North America and its premium scotch whisky brands (including Lagavulin and Oban) have shown strong growth. 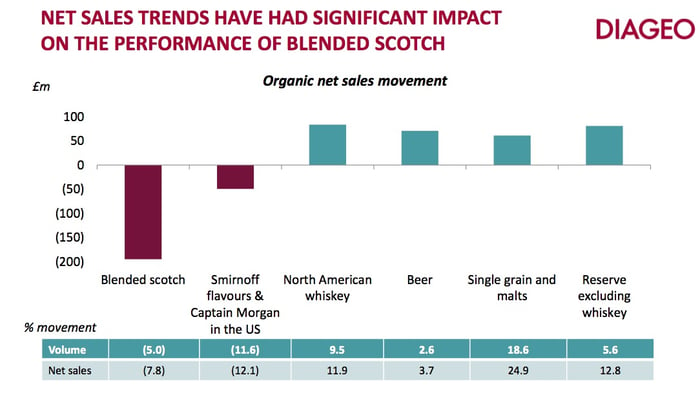 This slide from Diageo's earnings presentation shows how its mass-market offerings like Johnnie Walker scotch) have slipped over the last year while premium brands have gained. Source: Diageo

Organic sales also fell (by 2%) in the critical Asia-Pacific region There, Diageo has been hurt by an anti-corruption crackdown in China, which put sharp limits on gift-giving among officials and business executives. (Expensive booze was a popular gift.) Organic sales were also down 1% in Latin America and flat in Europe. But Africa, where Diageo has been working to take closer control of its businesses, sales rose 6%.

Net sales in several regions have been hampered by Diageo's ongoing effort to reduce inventories at its wholesalers. That effort, which Diageo refers to as "destocking," has meant fewer shipments (and thus lower sales) in the near term -- an effect that may persist into the next year.

The destocking effort is part of a larger push by CEO Ivan Menezes to turn the company's focus away from sales to wholesalers and toward the needs of retailers. Leaner inventories should help the company respond more quickly to consumer trends, it says -- and it expects sales growth to recover once the effort is complete.

Strong guidance, but a bit more patience may be needed
Diageo's 2015 numbers may have been unimpressive, but its guidance was decidedly upbeat. While CFO Deirdre Mahlan said that fiscal 2016 would be "a transition year," with only modest sales growth as destocking efforts wind down, she forecast more impressive "mid-single-digit" growth beginning in 2017 and lasting through at least 2019. Diageo expects its organic operating profit margin to increase by 100 basis points over that period.

Several factors will drive that increase, including a series of operational and productivity gains that should save £500 million a year by fiscal 2019. On the product front, the company's plan is to be more aggressive with its mass-market brands while pushing further into the increasingly popular (and profitable) premium spaces. A marketing push for Smirnoff vodka in the U.S. is already showing results, Mahlan said.

The upshot: Diageo may be through the worst of the storm
Diageo's stock had a tremendous run from 2009 through 2013, but a lack of sales growth has held it back over the last six quarters. That lackluster growth may continue for a bit longer -- but if Diageo's guidance is on-target, things should begin to look up over the next year.