Shares were up over 4% in early trading.

The details: big improvements in North America and progress elsewhere
Simply put, this was a huge quarter for Fiat Chrysler.

After both General Motors and Ford reported huge profits and fat operating margins in North America, CEO Sergio Marchionne and his team in North America needed to show that they could translate the company's strong sales of pickups and Jeep SUVs into similar gains. FCA's 7.7% margin in North America was well short of the 11%-plus margins at Ford an GM, but it was a big improvement over last quarter's dismal 3.7% result. CEO Sergio Marchionne acknowledged that the company still has more work to do in order to close the gap with Chrysler's old Detroit rivals. But he promised that the work is happening, and the stronger second-quarter result shows progress is being made.

Other FCA initiatives around the world are moving forward as well. A critically important new factory in Pernambuco, Brazil began production of the entry-level Jeep Renegade during the quarter. That's a significant launch for FCA, which has major operations in Latin America (or "LATAM," as it calls the region.)

The small Jeep Renegade will spearhead the brand's global expansion. Production has begun in Brazil, and a China factory will begin building the small Jeep next year. Source: Fiat Chrysler Automobiles

Like most of its rivals, FCA lost money in Latin America during the second quarter -- €79 million ($86 million) -- as steep recessions have clobbered new-car sales in key markets like Brazil. But unlike most of its rivals, FCA is in pretty good shape in the region: Excluding the costs associated with the Renegade's launch, LATAM would have broken even in the second quarter.

Results elsewhere were mixed. FCA is a minor player in China's huge market, relying mostly on imported products. China's import duties put those products at a price disadvantage, one that has been exacerbated by the recent economic slowdown. FCA still managed a profit in Asia, but earnings and margins fell from a year ago.

CEO clarifies on vehicle buybacks and reports of product delays
Investors have raised concerns over repeated reports that Fiat Chrysler is delaying key product programs -- perhaps as a move to prepare the company for sale. But Marchionne refuted those reports during a conference call for analysts on Thursday.

Marchionne said that, broadly speaking, the company was committed to the timing outlined in its five-year plan last year. It is possible that the specific timing of individual products might be adjusted in response to market conditions, he said. But the underlying engineering efforts tasked with developing new vehicle architectures and new engines are proceeding at full speed.

Marchionne also said that the costs of a widely reported vehicle repurchase program, required under the Consent Order announced by the U.S. government earlier this week, were unlikely to cause it to exceed the $20 million it is required to spend on recall- and safety-related activities under the Order. In other words, unless additional violations of federal law are found, FCA's total exposure under the Consent Order is likely to be $90 million: A $70 million fine, plus the additional $20 million in required spending.

A word about FCA's "net industrial debt"
FCA's debt load continues to be a source of concern. The company often refers to its "net industrial debt," which stood at €8 billion ($8.7 billion) as of the end of the quarter. But what reports often miss is that number is "net" of the company's cash hoard (€21.8 billion, or $23.78 billion) as well as its current financial receivables and certain other assets.

In reality, FCA had €31.8 billion ($34.7 billion) in debt outstanding as of the end of the quarter. Against that, FCA had the €21.8 billion cash hoard and another €4 billion in available credit lines.

Paying it back will take a substantial bite out of net profits for the next several years, as you can see from the maturity schedule below. 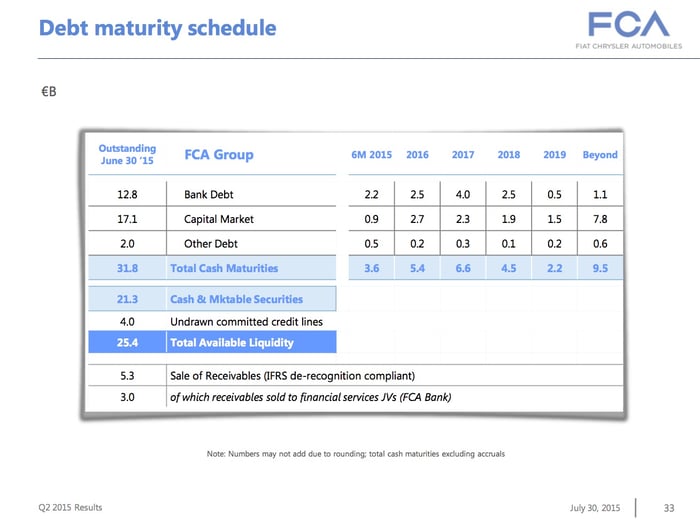 By contrast, at the end of the second quarter, General Motors had $9.2 billion in debt, Ford had $13.7 billion. Both had over $20 billion in cash.

FCA increased (some of) its full-year guidance

Stronger NAFTA margins, the successful start of Renegade production in Brazil, and FCA's relatively minimal exposure to trouble in China led to a boost in guidance. FCA now says that its full-year revenue will exceed €110 billion (upward from an estimate of €108 billion) and its adjusted earnings before interest and taxes will be "equal to or in excess of" €4.5 billion (up from a range of €4.1 billion-€4.5 billion.)

Other guidance remains unchanged. FCA still expects worldwide shipments to total about 4.8 million for the full year, net profit to come in between €1 billion-€1.2 billion, and to end the year with net industrial debt of between €7.5 billion-€8 billion.