The very first article that got published on Exxonmobil's (NYSE:XOM) recent earnings release highlighted that this was the company's worst earnings performance in 6 years. It makes it sound really scary that the company has fallen back that far, but is it really that surprising? After all, this past quarter's oil prices look awfully similar to what they were back in 2009 in the middle of the global economic recession. 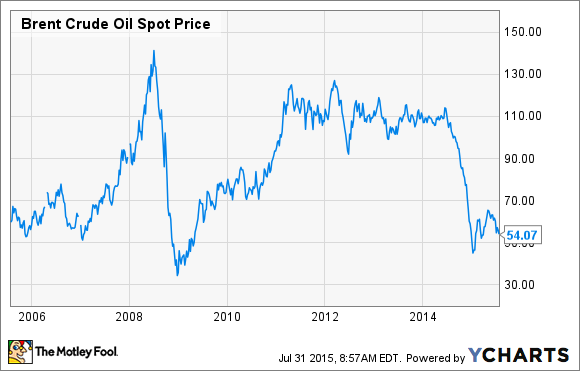 Keeping this as a point of reference helps to understand this past quarter's performance. Of course it wasn't good by any means, but there were some encouraging points. So let's drill down into the numbers to find out what stood out this quarter

By the numbers
Over the past year or so as oil prices have been on the decline, Exxonmobil has actually been able to beat earnings estimates, but that streak came to an end this quarter as earnings per share of $1.00 missed analyst expectations by $0.06. As you might expect, oil prices absolutely killed the company's upstream operational profits, but some of those losses were made up for by strong results from its refining and chemical segments which both benefited from the cheaper crude feedstocks, as seen in this chart. 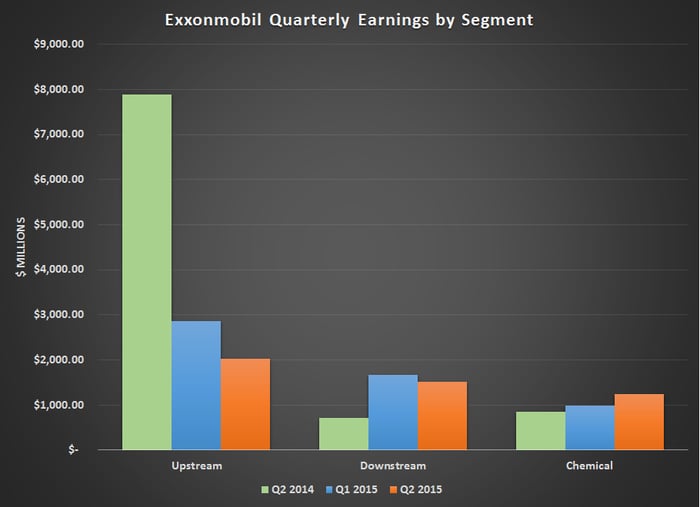 On the cash flow side of things, operational cash flow tallied $8.8 billion. Along with some asset sales, the total amount of cash that came in the door this quarter was $9.6 billion. It was enough to cover the $8.2 billion in capital expenditures for the quarter, but still fell short of the additional $4.1 billion that was spent in the form of dividends and share repurchases.

The Good: Production increases
If this were a couple of years ago when oil prices were high, analysts would probably be jumping for joy to see the increased production numbers that the company posted this past quarter. Alas, some rather impressive production growth numbers came at the worst time to announce them. Net overall production grew by a modest 3.6% compared to this time last year, but what actually impressed was that the company's liquids production grew by 11.8% to 2.29 million barrels per day.

A lot of this new production came from its Canadian operations, which saw the start-up of its Kearl oil sands expansion project as well as expansion of its Cold Lake Nabiye bitumen production.

The Bad: Just about everything else
I could try to put a positive spin on some other aspects of Exxonmobil's earnings such as the uptick in downstream and chemical earnings, but there isn't much to work with. Almost all of the gains from those business segments came from improving margins rather than increased capacity or the result of some upgraded work at its facilities.

Exxonmobil's upstream profits declined 74% over the past year, which was better than some of its big oil peers, but certainly not all. This shows that the company's overall production portfolio is able to handle some stress, but if oil prices were to decline much further than where they are today it would really bring Exxonombil's current production platform into question.

The Ugly: US upstream operations
Of all the declining earnings, it was Exxonombil's US production that really stuck out as a sore thumb. Consider this, US oil and gas production makes up about 25% of the company's total production portfolio, and this particular segment of the business has yet to turn a profit in 2015. US has not been a strong point for Exxonmobil for the past several years as it has tried to incorporate the purchase of XTO Energy into the fold, but somewhere along the way the company is going to need to do some serious cost cutting to make this a profitable business segment.

What a Fool believes
Again, this quarter for Exxonombil needs to be taken in context. Overall earnings looked rough, but the ramp up of production on the liquids side could be a sneaky benefit when oil prices eventually recover. This quarter wasn't great, but there were no real red flags that change the investment thesis on Exxonmobil for the long term. The company isn't going anywhere anytime soon, for better or worse.