After patents expired on Eli Lilly's (NYSE:LLY) blockbuster drugs Cymbalta and Evista in 2013 and 2014, respectively, the company's sales have slipped from more than $24 billion in 2012 to less than $20 billion last year. 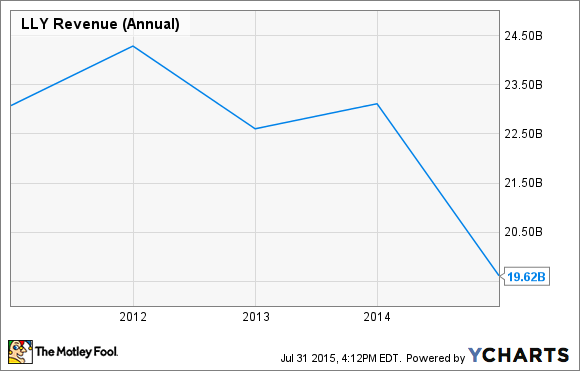 The revenue drop-off sent many dividend investors heading for the hills, but a wave of cost-cutting and the launch of new drugs could mean Eli Lilly is turning a corner, and if that's true, then dividend investors ought to consider owning it again.

Battening down the hatches
Patent risk may be a given in biopharma, but that doesn't diminish the the importance for drugmakers to act quickly to cut costs if they want to keep their balance sheets unchecked when patents on key drugs expire.

Eli Lilly appears to have done a good job at right-sizing itself in the wake of losing market share on the antidepressant Cymbalta, its previously best-selling drug, with $5 billion in annual sales, and the osteoporosis drug Evista, which had annual sales in excess of $1 billion per year before going off-patent.

Since 2011, Eli Lilly has cut its total annual operating expenses from $13.7 billion to $11.3 billion last year, and in the second quarter, the company's non-GAAP operating expenses dropped 7% year over year while non-GAAP sales fell 4%. The greater decline in expenses than sales in the past year could indicate that while Eli Lilly's cost cutting wasn't able to offset the loss of billions of dollars in sales to the bottom line last year, margins could accelerate if Eli Lilly's sales start growing again.

Delivering the goods
Eli Lilly's effort to return to top-line growth includes the commercialization of new cancer and diabetes medicine, and in the past year, Eli Lilly has secured regulatory approval for the colorectal and gastric cancer drug Cyramza and the diabetes drugs Jardiance and Trulicity.

Now that those three drugs are rolling out globally, investors are beginning to gain insight into their market potential, and based on second-quarter sales, investors should be pleased with what they're seeing.

Cyramza, which initially won FDA approval in April 2014 and costs a jaw-dropping $13,256 per month, racked up sales of $87.7 million in the second quarter, significantly higher than the $13.7 million in sales recorded during its first 3-months on the market a year ago and nicely above the $67.5 million in sales during the first quarter of 2015.

Jardiance and Trulicity are also beginning to kick in, with those two drugs producing combined sales of $55.4 million in Q2, up from $37.6 million in the first quarter.

Looking ahead
Thanks in large part to Cyramza, Jardiance, and Trulicity, Eli Lilly's management believes that it will return to top-line growth this year.

The company thinks its revenue will be between $19.7 billion and $20 billion and that its non-GAAP EPS will eclipse $3.20 in 2015. If Eli Lilly can make good on that guidance, then it will eclipse the $19.6 billion in sales and $2.78 in non-GAAP EPS it notched in 2014 -- marking the first year of growth since Cymbalta's patent expiration. Importantly, a return to growth could go a long way toward solidifying the company's balance sheet and knocking down the company's sky-high cash dividend payout ratio of 98.8%, something that's critical if the company hopes to return more money to shareholders in the form of dividends in the coming years.

There's plenty of work still left to do to get Eli Lilly to that point, but because Eli Lilly's financials appear to be gaining momentum, I think the company's shares are intriguing enough for dividend investors to consider owning it again.