The move wasn't surprising. Nokia had been expected to sell HERE to concentrate on integrating its recent acquisition of Alcatel-Lucent, which turned it into the second-largest telecom equipment in the world. Meanwhile, automakers have been beefing up their mapping systems in a gradual shift toward autonomous vehicles.

However, the acquisition of HERE is a negative development for Google (NASDAQ:GOOG) (NASDAQ:GOOGL), which is developing its own map network for driverless cars. Let's discuss how the HERE deal could hurt the search giant's autonomous ambitions.

What automakers want
Many leading automakers believe that driverless cars could reach public roads by 2020. BMW has been testing out driverless vehicles over the past two years, and made a deal with Chinese search giant Baidu to co-develop driverless cars in China last year. Daimler's Mercedes-Benz has showcased various driverless concept vehicles, including an autonomous 18-wheeler and a stunning concept car known as the F 105. Audi's driverless car completed a 3,400-mile road trip across the U.S. earlier this year.

That all sounds great for Google, which started building a fleet of 100 experimental autonomous vehicles last year. Google doesn't plan to manufacture and sell cars on its own, but it hopes to license the technology to leading automakers. Google mounts rotating LIDARs atop its vehicles to create 3D models of their surroundings. Since the LIDARs can't fully process roads in real time, Google maps out roads again in high detail to account for curb heights, obstacles, and signs. If Google licenses out this technology to automakers, it can tether driverless vehicles to an Android app, keep tabs on vehicle performance, and track users' daily routes for targeted ads across multiple platforms.

Three big roadblocks for Google
However, Google's grand vision of autonomous cars traveling across its own maps might never be realized, for three main reasons.

First, HERE Maps already account for over 80% of all embedded auto maps worldwide. Like Google, HERE is processing 360-degree images of roads with LIDAR technology. It gathers data from over 80,000 sources, including its own fleet of street-scanning vehicles. Nokia previously claimed that HERE would finish scanning a high-detail map database for highways in the U.S. and Europe by 2018, which would compete directly against Google's high-detail maps. As of last May, Google had only scanned 2,000 of the 170,000 miles of public roads in California in high-detail mode for driverless cars. 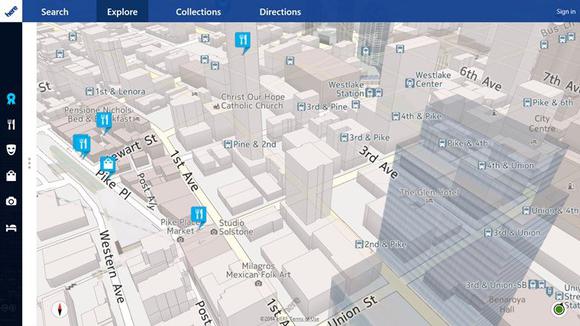 Second, German automakers don't want to hand over data on their drivers to Google. In a clear swipe at Google, Audi CEO Rupert Stadler recently declared that the "only person who needs access to the data onboard is the customer". Daimler CEO Dieter Zetsche voiced similar concerns in February, stating that he didn't trust Google with its drivers' personal data. In January, BMW sales and marketing chief Ian Robertson told The Financial Times that many tech and advertising firms were asking for data on BMW drivers, but the company refused to cooperate. By buying HERE, the German automakers are clearly stating they don't want Google to collect data from their vehicles. If other automakers follow that lead, Google will be left out in the cold.

Lastly, fully autonomous cars can still have accidents, due to careless human drivers and unpredictable pedestrian behavior. Fully driverless systems are also expensive. Google's cars, for example, are each equipped with about $250,000 in road-scanning gear. As a result, cheaper "collision avoidance" systems, which only cost around $1,000 to install, will arguably be a more practical choice for the foreseeable future.

Don't count Google out yet
HERE Maps might become a Google-free grid for driverless vehicles in the future, but it doesn't mean that Google can't track drivers at all.

With Android Auto, its smartphone mirroring solution for car dashboards, it can track users through Google Maps and other apps. But it can't tap into the advanced telematics of a vehicle, which detect whether an adult or child is sitting in the car, or how long an engine has been running. The acquisition of HERE Maps certainly won't hurt Google financially. However, it could douse its "moon shot" hopes of creating a smart grid of autonomous vehicles over the next few decades.