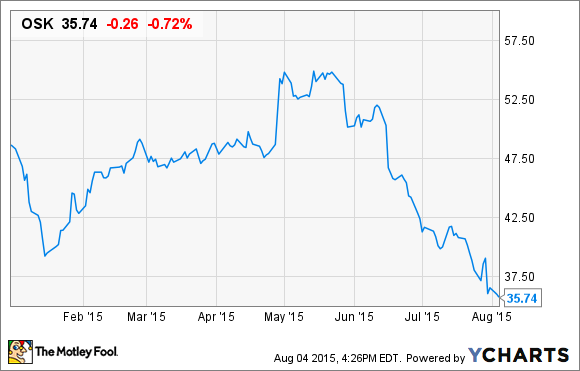 In fact, it's headed lower.

Oshkosh by the numbers

But why? Was the news really that bad? That's what we're here to find out, as we dig into the company's earnings numbers. Briefly:

And that, in a nutshell, is how bad numbers at Oshkosh quickly became worse numbers -- before improving and ending up as slightly less bad numbers. Now here's the story behind those numbers.

To judge from management statements, the big problem at Oshkosh last quarter was the company's struggling "access equipment" business (work platforms and powered lifts). CEO Charles Szews attributed a reduction in full-year 2015 earnings guidance (now $3.00 to $3.25 per share) to "lower expected sales in our access equipment segment," which he said "fell short of our expectations."

And in fact, access equipment sales were down 10% in the quarter, with operating profit from this business declining 18% on much weaker margins. That's certainly a big problem for Oshkosh, which, according to data from S&P Capital IQ, got more than half its revenues -- and essentially all of its profits -- from sales of access equipment last year. (Access equipment sales are expected to be down a further 5% to 10% in 2016.)

But that hasn't always been the case.

The trouble with Oshkosh
The much bigger story at Oshkosh, though, is what's happening to its defense business, which historically (from 2009 to 2012, for example), produced both more revenues and more operating profits for the company.

With the wind-down of the wars in Iraq and Afghanistan, those sales have fallen off dramatically. Last quarter, Oshkosh says there was a complete "absence" of international sales of its small all-terrain MRAPs. Meanwhile, the U.S. itself has more MRAPs than it knows what to do with, and can't be expected to buy any more from Oshkosh. At the same time, sales of unarmored military trucks -- "FHTVs" and "FMTVs," which might have helped fill the gap in revenues -- have been hit by a "break in production."

Result: Q3 defense sales fell 59% to $194 million. And Oshkosh didn't earn a dime on any of those sales, instead recording a $7 million operating loss.

What it all means for investors
With one former revenue driver suffering a sales slump, and the other an almost complete evaporation of sales, Oshkosh today is relying largely on its smallish fire and emergency vehicles and commercial businesses to keep the doors open and the electric bill paid. So far, that's been enough to let the company eke out about a $257 million trailing-12-month profit. But with free cash flow now firmly in negative territory ($110 million in cash burned over the past year), and analysts mostly predicting just single-digit growth over the next five years, even Oshkosh's current valuation of 11 times earnings looks pretty optimistic.

Down 8% post-earnings, Oshkosh stock could have even further to fall.