It's been a rough couple of weeks for energy companies in general, so it sure feels like a breath of fresh air when a company reports better-than-expected results on impressive operations. Energy Transfer Partners (NYSE: ETP) had one of those quarters, beating expectations for revenue and earnings and increasing its distribution to unitholders. Let's take a quick look at the important numbers for the quarter to give you a better idea of why this was such a good quarter for Energy Transfer Partners.

By the numbers
Despite missing ever so slightly on revenue estimates, the company was able to more than make up for it with better-than-expected EBITDA for the quarter-- a common theme among pipeline companies this past quarter. Total EBITDA of $1.62 billion was 12% better than consensus analysts compiled by S&P Capital IQ. The following chart lays out the improvement in segment EBITDA: 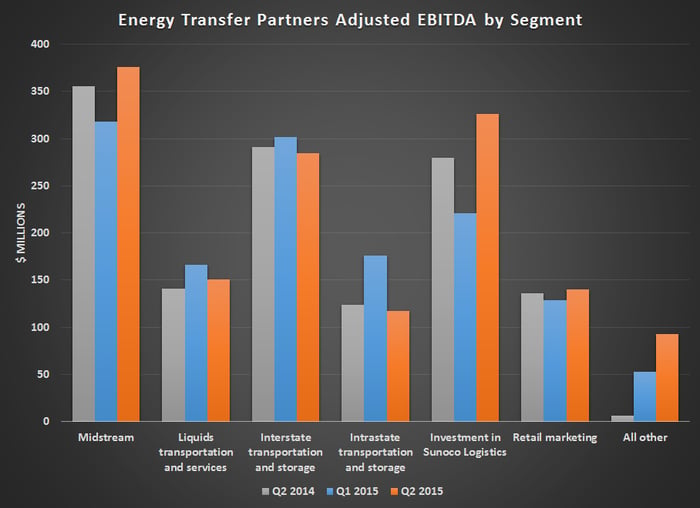 The real strengths for this past quarter came from its midstream segment, as well as its equity investment in Sunoco Logistics Partners (NYSE: SXL). The midstream business benefited from a large uptick in total volumes delivered and stored in its fee based contracts of this segment. What was even better about this number is that it covered up for an $80 million decrease in gross margins related to the commodity price-linked contracts. This is an extremely promising sign for the long term, because an uptick in prices will have a considerable impact on this segment's bottom line.

Like the midstream segment, Energy Transfer Partners' investment in Sunoco Logistics benefited largely from increased activity in its terminal-and-storage and refined-products pipelines. Not only were the gains in these segments able to cover up some declines in its crude-oil pipelines and marketing activities, but the gains also came after a $100 million impairment to its inventory values. Again, this is a sign that as conditions in the market improve, we could see another large increased contribution from Energy Transfer's investment in Sunoco Logistics.

Not everything was rosy, though. Some declines in the company's natural gas segment came from lower volumes of gas in the system, as well as unrealized commodity losses.

But let's get down to the really important numbers: distributable cash flow and the distribution coverage ratio. For the quarter, Energy Transfer grew distributable cash flow attributable to its unitholders by 17% compared with the year prior, to $875 million. After accounting for the hefty $317 million in incentive distribution rights it paid to its general partner Energy Transfer Equity (NYSE:ET), as well as the 8% increase in distributions compared with last year, the company was still able to stay in the black with a distribution coverage ratio of 1.03. That's even more respectable when you consider the headwinds that a couple of its business segments faced in this most recent quarter.

So unless Energy Transfer Equity makes some financial moves to merge the two entities together -- it wouldn't be a huge shock, considering it has the same on numerous occasions with its other partnerships -- your focus as an investor in Energy Transfer Partners should remain on how it performs in its existing business segments.

What a Fool believes
I don't think shareholders in Energy Transfer Partners could have asked for much more than what they got this quarter. The company performed well in all of its segments despite weakness in oil and gas prices, it raised its per unit distribution, and it was able to cover all of that distribution increase with its distributable cash flow. With shares trading at or near lows for the year and its distribution yield pushing 9% (!), perhaps it's time to put Energy Transfer Partners on your radar as a serious income investment for your portfolio.