Stocks are lower on Thursday, with the Dow Jones Industrial Average (DJINDICES:^DJI) and the broader S&P 500 (SNPINDEX:^GSPC) down 0.76% and 0.85%, respectively, at 1:45 p.m. EDT. The Nasdaq Composite was down 1.66%. One stock bucking the trend is Mondelez International, which is up 0.91% on the news that the high-profile activist investor has taken a $5.5 billion stake in the food and beverage group. 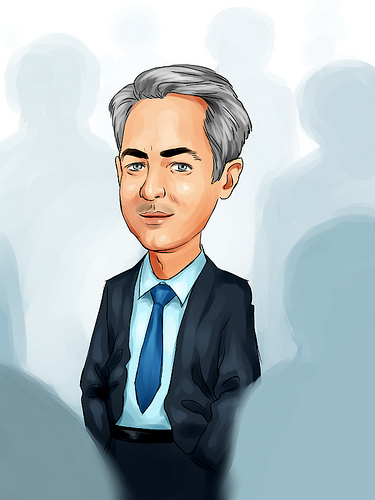 Bill Ackman's flip-flops on Mondelez/Kraft
In his most recent
annual shareholder letter, Berkshire Hathaway CEO Warren Buffett railed against investment bankers for the mental "flexibility" they demonstrate in the pursuit of fees, writing:

Investment bankers, being paid as they are for action, constantly urge acquirers to pay 20% to 50% premiums over market price for publicly held businesses. The bankers tell the buyer that the premium is justified for "control value" [...] A few years later, bankers -- bearing straight faces -- again appear and just as earnestly urge spinning off the earlier acquisition in order to "unlock shareholder value." Spin-offs, of course, strip the owning company of its purported "control value" without any compensating payment.

We're seeing an example of the same process today, only this time, it's an activist investor pursuing returns, not advisory fees.

Late yesterday, The Wall Street Journal reported that combative hedge fund manager Bill Ackman has taken a $5.5 billion stake in Mondelez International. According to the Journal, "the activist believes Mondelez has to grow revenues faster and cut costs significantly, or sell itself to a rival."

With a market capitalization in excess of $75 billion, there are very few food and beverage business large enough to acquire Mondelez. One potential acquirer is the Kraft Heinz Company, which has a market value of nearly $100 billion.

Hang on a minute.

Rewind to Oct. 2012: Mondelez was created when Kraft Foods spun off Kraft Foods Group (the North American grocery business). The international snacks and confectionery business that remained was then renamed Mondelez International.

A couple of activist investors had been advocating for a spinoff, including -- you guessed it -- Bill Ackman.

Now go back a couple of years before that. In 2010, Kraft Foods was trying to acquire British confectioner Cadbury, which is now one of Mondelez's most important businesses. One of the supporters of the deal was... Bill Ackman. He even produced a Powerpoint presentation to explain the economic rationale behind the deal.

Perhaps all of this back-and-forth is beginning to make you dizzy; if so, an antidote may be on the way. If Mondelez were to sell itself to Kraft Heinz (which seems like a genuine possibility), this perpetual motion machine would come to a halt.

Indeed, Kraft Heinz is jointly owned by Brazilian investment group 3G Capital and Berkshire Hathaway, and as Warren Buffett explains in his Owner's Manual: "Regardless of price, we have no interest at all in selling any good businesses that Berkshire owns. [...] Gin rummy managerial behavior (discard your least promising business at each turn) is not our style."