What: Oasis Petroleum (NYSE:OAS) was a textbook example of what happens to shares of a leveraged oil and gas producer when oil prices hit new lows. In the month of July, as we saw, the price of West Texas Intermediate declined all the way to below $50. Add a cup of analyst downgrades and a pinch of lowered price targets to taste and you get a recipe for Oasis' shares plunging a whopping 33%. 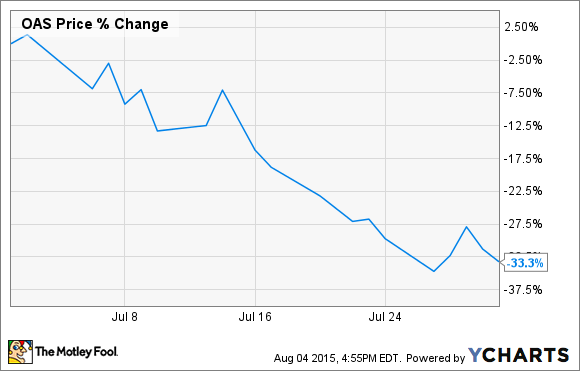 So what: The reason that Oasis and so many other oil and gas producers are losing immense value is pretty cut and dried: Its entire revenue stream is tied to commodity prices. There are a couple things that put Oasis at a particular disadvantage to others, though. First, it is a pure-play producer with all of its oil and gas properties in the Bakken formation of North Dakota. This region just happens to be one of the farthest from any refineries in the U.S., so transportation costs are higher and therefore oil from this region typically goes for even less than the benchmark WTI price.

Second, Oasis doesn't have as robust of a hedging protection as some of the other players in the space. By the end of 2015, almost all of the company's futures contracts to hedge oil prices will have expired, leaving it to the whims of the market.

And finally, the company's finances are a stretched a little thinner than others trying to service its debt. Current EBITDA-to-interest expense ratio of 7.44 times puts it on the lower spectrum of its peers. That kind of coverage is not a death sentence for a company, and it doesn't have any debt maturities until 2019, but once that hedging protection expires, it could become increasingly hard to keep operations going and service its debt obligations.

Now what: Some value investors looking for a cheap energy stock are going to see Oasis tangible book value trading for 53 cents on the dollar and say that it is a bargain, but its shares are cheap right now for a reason. Even with some strong hedging protection in place during the first quarter, the company lost money, and that protection only gets weaker as the year progresses. Unless it gets a jolt from higher oil prices soon, it will be hard for Oasis to drag itself out of this funk anytime soon.