Fitbit's latest and greatest trio of products are driving sales. These devices cost more and show that Fitbit is making progress moving upmarket.

Surge is Fitbit's most expensive product at $250. Image source: Fitbit.

It seems that investors weren't all that thrilled about Fitbit's (FIT) first public earnings release, in part because gross margins are under pressure as well as the simple fact that expectations were incredibly high heading into the report -- shares tapped all-time highs just hours before the release. The foreign exchange headwinds that all U.S.-based companies that sell abroad are facing made an appearance here as well. But the other factor that weighed on profitability is actually a double-edged sword.

The bad part
On the subsequent conference call, CFO Bill Zerella said that an impressive 78% of the quarter's revenue came from Fitbit's latest and greatest Charge, Charge HR, and Surge products. In other words, that translates into a solid $312.3 million in sales from the trio of activity trackers.

Since these products are so new (Charge launched in November 2014 while Charge HR and Surge launched in January 2015), the cost curves remain relatively high. This is true of all new tech gadgets, and Fitbit's devices are no exception. There were also extra costs associated with ramping up manufacturing to meet demand for Charge HR. Most companies enjoy margin expansion as revenue increases due to increased operating leverage, but Fitbit isn't able to benefit from this scale yet.

The good news is that Fitbit has already absorbed most of the fixed costs associated with expanding manufacturing, so at this point it's just working on reducing variable costs, which means that operating leverage should start to kick in soon.

The good part
More importantly, this trio of new products represents an important strategic shift for Fitbit: it's moving upmarket. While in the early days, most of Fitbit's activity tracking products cost $100 or less, the Charge, Charge HR, and Surge are big pushes into more full-featured devices that hope to even blur the line with smartwatches (in the case of Surge). Here is Fitbit's current product portfolio.

Fitbit has made consistent progress driving up the average selling price of its devices over the past couple of years, coming in at a record $88 last quarter. 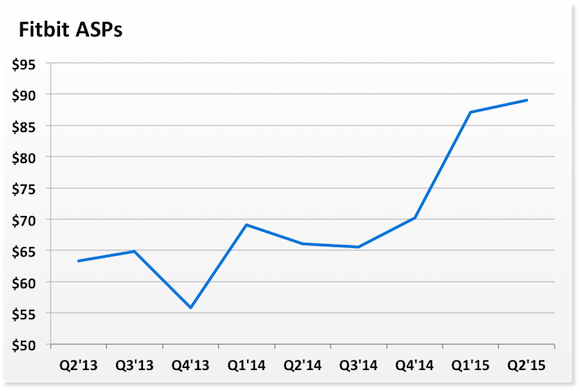 As the company continues to push higher in terms of market segmentation and pricing, ideally it will see higher engagement and usage as well. This is especially potent considering the fact that Fitbit, like all activity trackers, has something of an abandonment problem on its hands. That's not a hurdle specific to Fitbit, mind you. Rather, average people just don't often follow through with their commitments of actually becoming more active in a sustained way.

But this is yet another way that Charge, Charge HR, and Surge are helping. CEO James Park noted that the company is seeing increased engagement directly attributable to these products, since they carry more sensors that can track more data and include features like caller ID. Fitbit will continue investing in making the experience more interactive and social with the hopes of bolstering engagement and usage.

As predominantly a hardware company for now, Fitbit's long-term viability depends critically on being able to generate recurring revenue through device upgrades. So far, the move upmarket is working well.