Thanks to the ongoing iPhone 6 and 6 Plus upgrade cycle, the Mac-maker once again posted impressive top- and bottom-line results when it reported earnings late last month. Equally important, China emerged as the critical region powering much of Apple's recent success. But given recent events, China's increasingly important role in driving Apple's finances carries risks and benefits that investors need to clearly understand and monitor in the coming months and year.

Apple's growth in 2 charts
Apple's aggregate sales surged an impressive 33% during its fiscal third quarter. However, upon examining its performance by its geographic reporting segments, the primary driver behind this meaningful sales expansion becomes immediately evident. 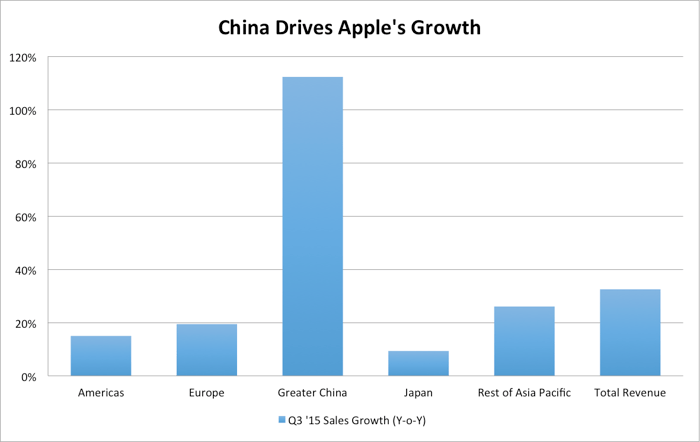 All told, growth from Apple's Greater China segment, which includes Hong Kong and Taiwan in addition to Mainland China, accounted for 58% of Apple's total sales growth in the quarter. In terms of total sales, Greater China generated 26.7% of Apple's revenue for the quarter, second only to its all-time high of 29% in the prior quarter. 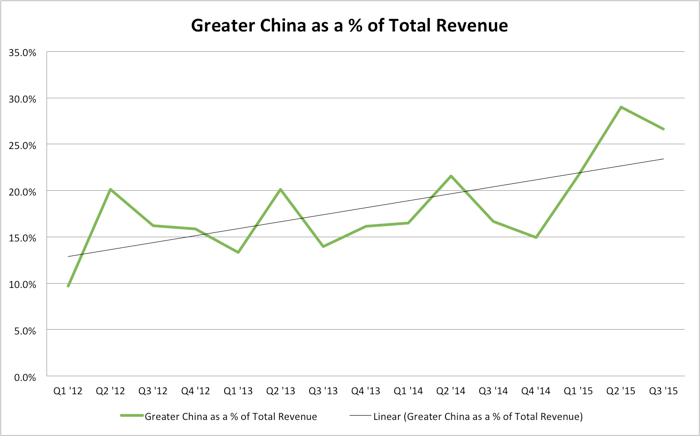 On Apple's conference call, CEO Tim Cook made a compelling case that this trend represents a fundamental shift in Apple's revenue composition, one that will continue in the coming years. Cook cited data including an analysis from McKinsey & Co. claiming that middle-class households will rise from a mere 12% of all Chinese households in 2012 to 54% by 2022.

As China goes, so goes Apple
China's growth over the past several decades has been nothing short of astounding. However, mounting evidence suggests the country could face issues maintaining its more recent debt-fueled growth, a risk that could clearly adversely impact Apple shares in the near term.

According to McKinsey Global Institute, China's total debt -- including government, personal, and corporate debt -- soared in the wake of the global financial crisis from 158% of GDP in 2007 to 282% of output in Q2 2014. This puts China's total debt-to-GDP in line with more developed peers like South Korea (286%), Australia (274%), and the U.S. (269%), although it bears noting that additional borrowing may have further exacerbated this figure in the intermittent quarters.

More alarming perhaps is that the overwhelming majority of the borrowing glut in recent years occurred within China's financial and corporate sectors. On one hand, this borrowing surge presents little cause for concern if the projects funded by this fresh debt prove viable. On the other hand, even for a country of China's truly mammoth economic potential, observers could take an understandably skeptical view that not all of the recent borrowing binge went to support productive investment.

Toward the end of Apple's recent conference call, Tim Cook said that Apple saw no signs of a deteriorating economy in China during its most recent quarter. Quite the opposite: Apple plans to expand its store count in China from 22 to 40 by the middle of 2016.

This increased exposure to the Chinese consumer will bring with it increased sensitivity to Chinese growth within Apple's overall operating results. Long-term, having more of China's 1.35 billion people entering the modern economy should certainly benefit Apple. However, with recent signs of trouble beneath the surface, possible near-term headwinds could adversely affect Apple's growth narrative.

Remember, lower-than-expected iPhone sales in the company's fiscal third-quarter report largely triggered Apple's recent sell-off. If China falters, and Apple's iPhone upgrade story disappoints investors, another sell-off could easily erase more of Apple stock's gains. For long-term investors, this could create a possible buying opportunity. Either way, its increasing link with China has evolved into perhaps the most crucial storyline for Apple investors to watch throughout the remainder of the year.